Lee and I spent today in Manhattan. We played at being tourists, the main object of which is to be able to say “I’ve been there” to as many sights as possible. So today was Times Square, The Empire State building and Central Park. 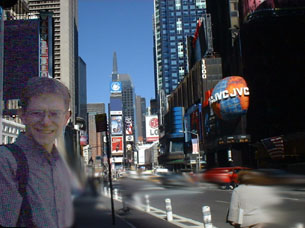 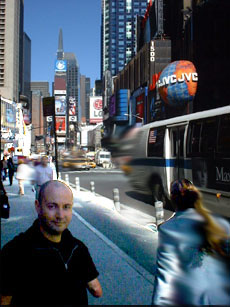 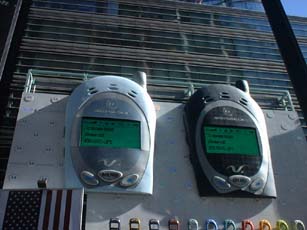 Of course, while they were of some interest to us, what we found much more entertaining was riding the subway, eating in a cafe in The Empire State Building, 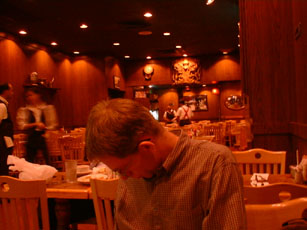 speaking to a coachman who takes people for a ride around Central Park, watching a tramp try to chat up a woman (Christine) in Central Park –He asked us to watch his cart of bin liners and tin cans while he did so– and sitting opposite a rather butch transvestite / transsexual on the way back to Larry’s, after she got off, a Bruce Springsteen look-a-like guy sitting near us remarked that he didn’t think she pulled it off. I wondered if she had.

Once at Larry’s, exhaustion set in and I realized I was headed for a night of nausea. I kept thinking of towers and going round in circles, wondering in which order they should be built. Waking at 4:30 am, and then every half hour, racked with aches and pains, I wondered if I’d been exposed to Anthrax spores and so, in the early hours of day 4, I realized that I really had got into the present American mindset. 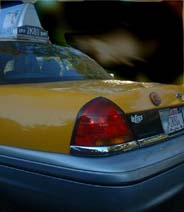 Recovering still took up most of the day, lying on the bed listening to the radio and a automatic handgun magazine being emptied nearby. Later on in the afternoon, we went out with Larry while he got his new second hand car checked over.

We tried out a McDonalds which was just as “good” as normal (in UK I mean) but for a third of the price. 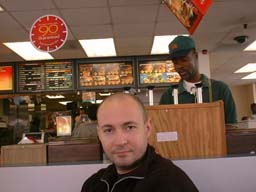 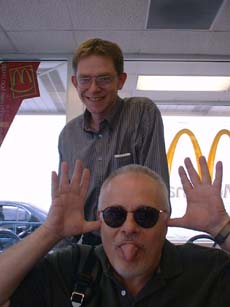 Larry drove us down to Brighton Beach and Coney Island, where two fat black men were speaking as strangers do. “Have you ever been to Florida?”…”Just once…but only briefly”. I felt as if I’d walked on to the set of “Waiting For Godot”. Once again Lee and I took the pictures to prove we had been there for any future need of evidence. 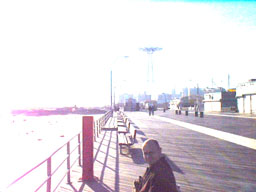 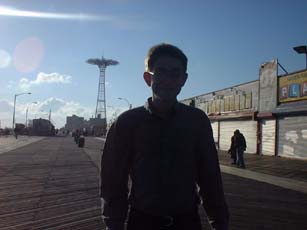 Once back indoors Lee tuned in to a UK radio station over the net which proceeded to interview people from New York for the next two hours.