.
It doesn’t matter how hard you try it’s so easy to leave something in a room. As Larry and I sat in the car ready to set off Graeme, the B &B, proprietor burst the front door open and pointed at my ear piece. The thing with earpieces is that you get so used to wearing them that you can’t tell if you’ve got it on most of the time. I’ve occasionally found myself in some places where an earpiece is pretty inappropriate but we won’t go there now. Mind you I’m not sure what’s worse that or standing in the middle of the street either seemingly talking to one’s self or looking at some poor unsuspecting stranger whilst saying “Hello sweetheart”.This has got to be one of the wettest summers we’ve had for a long time, it feels like Autumn, but then I guess in a way this dark wet landscape is a fitting backdrop to the castles and lush green terrain, but even so it’s still a bit depressing. No wonder the Romans went home.Our first port of call was Holy Island, which is an island that is joined to the mainland when the tide is low, when the tide is high the road is covered and you’re pretty much stuck there until the tide goes out again. 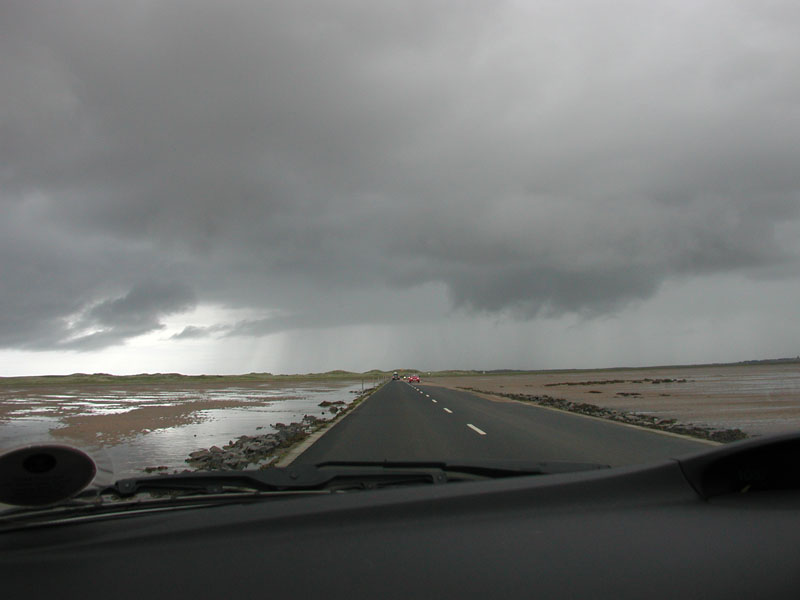 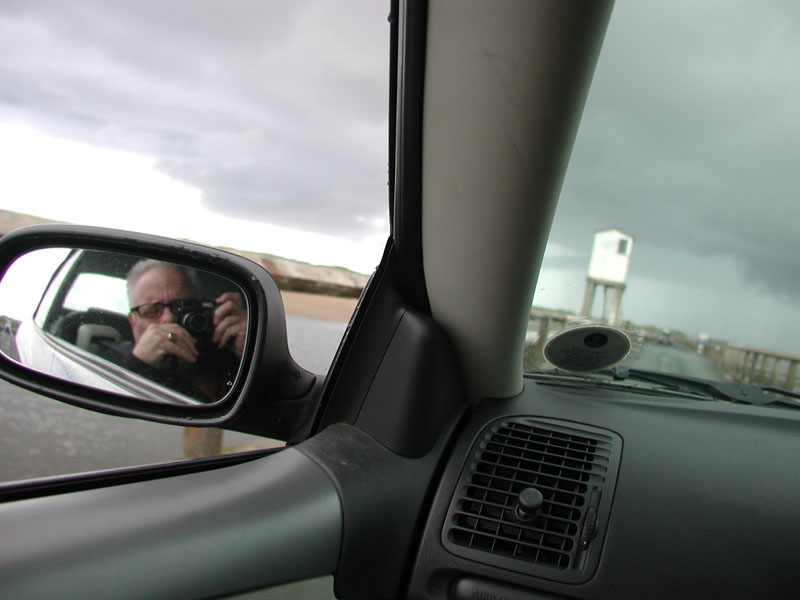 When we got to the Island we were directed to a car park which was a bit of a way from the castle, we sat in the car park for about 10 minutes waiting to see if we could get a Disabled space, now there were some normal spaces not far away but I kind of got caught up waiting for a disabled one because I thought one of the occupants was going to leave, it was only after they’d packed away the old lady, the wheelchair and themselves that they started to un pack their lunch. I looked at larry and said the C word!Then I drove across the car park to the original space which turned out to be better for the bus stop but not so good for the loo which sadly we both needed. We’d have been better off peeing against the tree had their not been a rather worrying lawn mower nearby with a couple of men dressed up in Alien suits. I pretended I was Captain Kirk with my earpiece and flip phone and they, well they kept on cutting the grass. 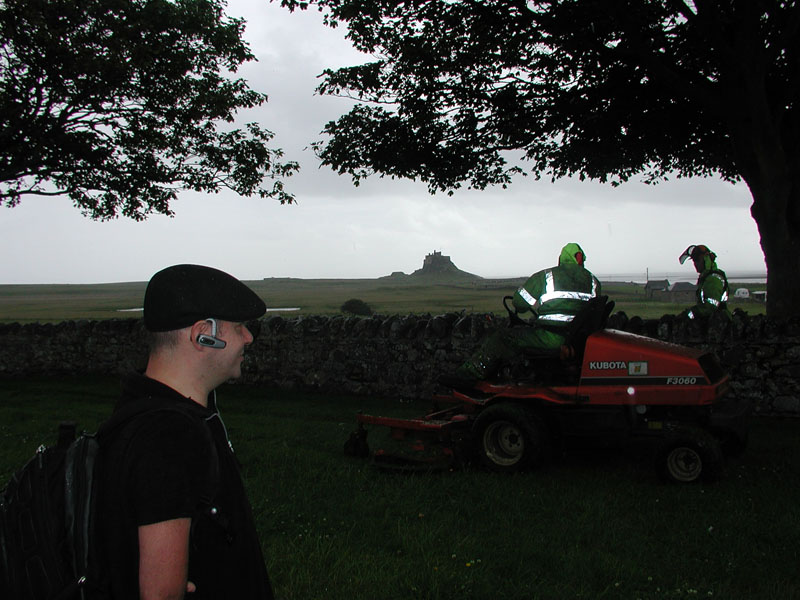 From the car park there was a shuttle bus that drove us to the Castle. First of all the windows were really misted up so I had lots of fun drawing teddy bears on the glass and secondly the bus driver saw this as a opportunity to try out his comedy routine for the God knows how many times that day. I listened to him and laughed a bit but mainly I was in awe that anyone could repeat the same monologue so many times and keep a smile on his face, but then I remembered how i like to laugh at my own jokes which I’ve told a million times before. At one point he seemed to improvise and got all sarcastic with an oncoming driver who was going to get us all in a gridlock, but even then, I thought “that must happen many times a day”. 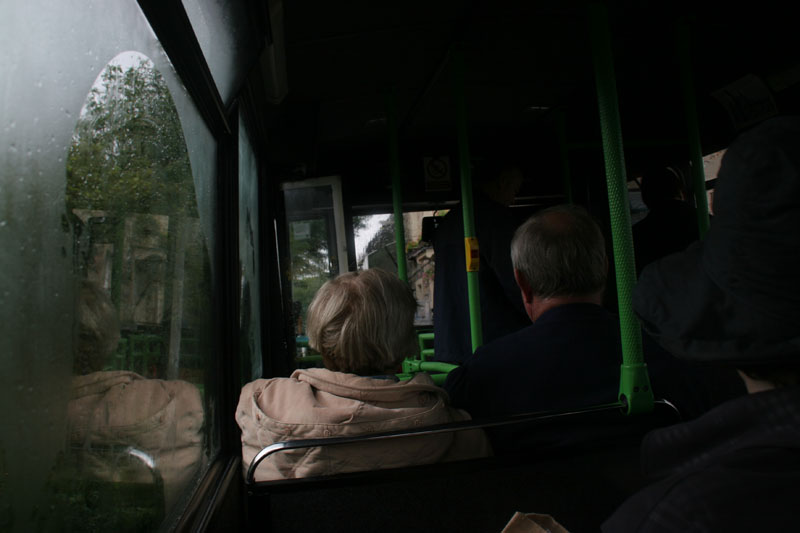 “There’s the Fire station, if they send a helicopter that takes 30 minutes, half an hour too late.”
I was tempted to pick him up on the subtleties of this issue but instead I just wiped my Teddy off of the glass. 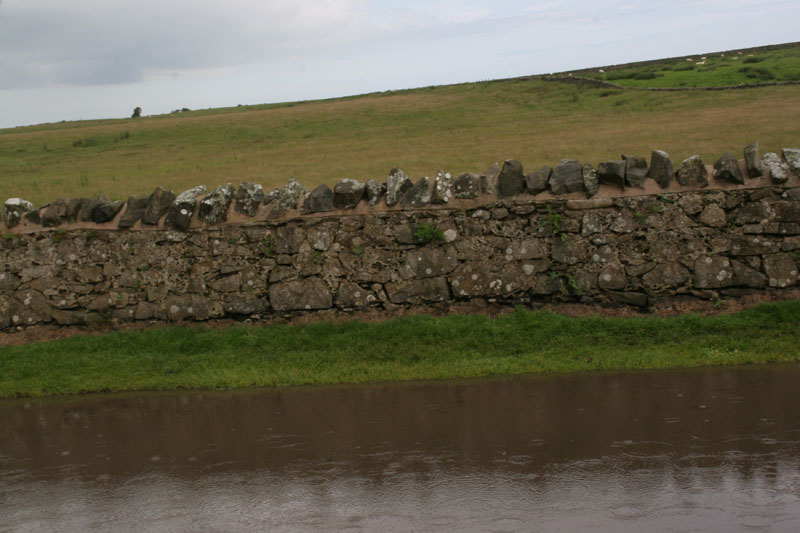 The roads were flooded but being Holy Island I thought it worth seeing if we could walk on water. 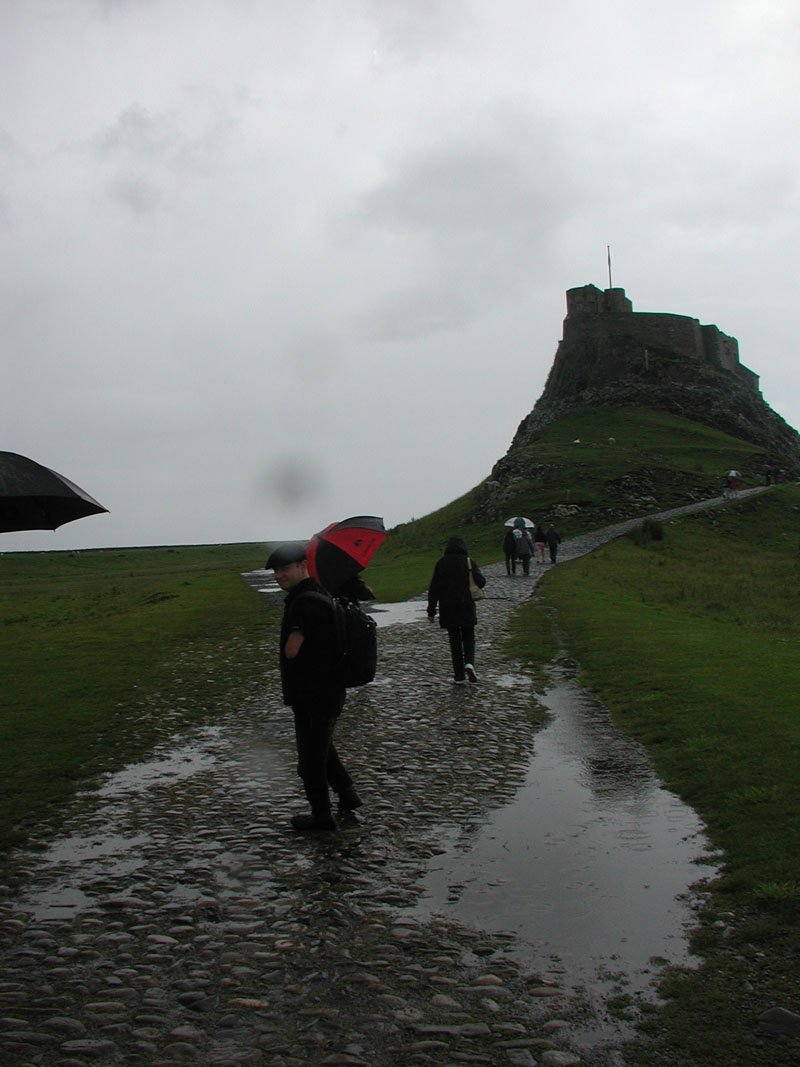 I put one toe in first and it didn’t look promising so I put my faith in physics and walked around the puddle. 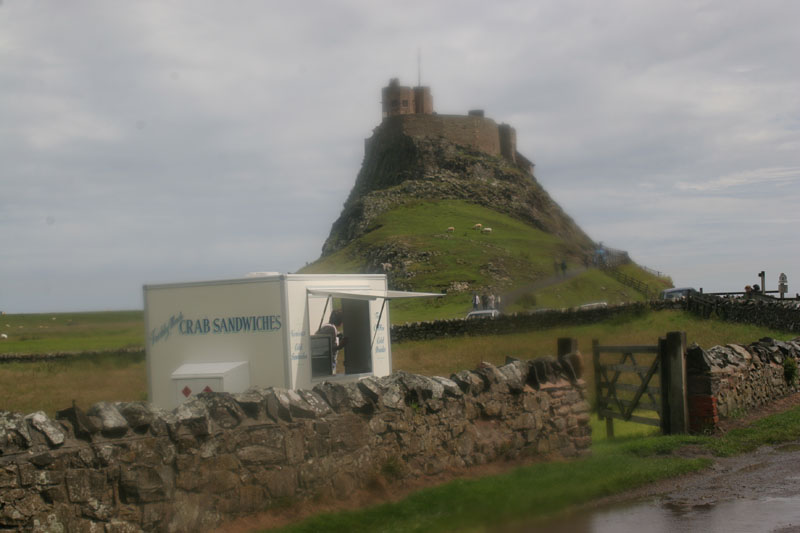 I think the Crab Sandwich lady had a walkie talkie through which she communicated with the people at the castle.
“OK shirley there’s some coming down now, they look a bit hungry”
“Right I’ll start wafting my crab smell towards them now, they’ll stand no chance” 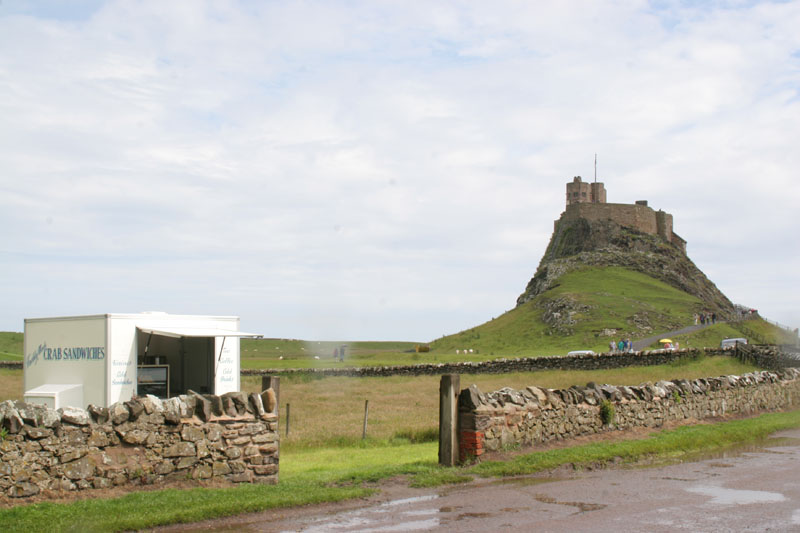 The Crab lady to me (in my imagination): “Oi… Too posh for Crab Sarnies are we….. you and your flashy Southern umbrellas, I bet if i’d said “”Crab ciabatta”” you’d have been willing to pay twice the money!”

Me: “Sorry, did you mention crab ciabattas?”

This next bit in red is a rehash of what was written about the castle on wikipedia at http://en.wikipedia.org/wiki/Lindisfarne_Castle

Lindisfarne Castle is located along what was once a very precarious border area between England and Scotland . The area was also frequently attacked by Vikings. In fact it was at this place that the Vikings are said to have first landed.The main castle was built in 1550, although other fortifications had existed here throughout history, but as Lindisfarne Priory went out of use, the stones from the priory were used to help build the castle. By normal standards this is a small castle and acted more like a fortBy Tudor times it was clear there was a need for a stronger fortification. So the fort was created on Beblowe Crag between 1570 and 1572 and formed the basis of the present castle.Elizabeth I strengthened the fort providing gun platforms for the new artillery technology, but When James I came to the succession he combined the Scottish and English thrones, which resulted in the castles decline.In the eighteenth century the castle was occupied briefly by Jacobite rebels, but was quickly recaptured by soldiers from Berwick who imprisoned the rebels, who dug their way out and hid for nine days close to nearby Bamburgh Castle before making good their escape.The castle was used as a coastguard look-out for a while and started to become something of a tourist attraction and in 1901 , it became the property of Edward Hudson , a publishing magnate and the owner of Country Life magazine. Shortly afterwards was refurbished it in the Arts and Crafts style by Sir Edwin Lutyens . Nearby is a walled garden, which had originally been the garrison’s vegetable garden, and was designed by Lutyens’ long-time friend and collaborator, Gertrude Jekyll between 1906 and 1912.

It is some distance away from the castle itself so while Larry went to look at that I sat in one of the overturned boats that Lutyens had used as sheds. Although actually the one I sat in was a replacement because in 2005, two of the boats were destroyed by arson. – An act of desperation no doubt by some poor stranded vandal -. 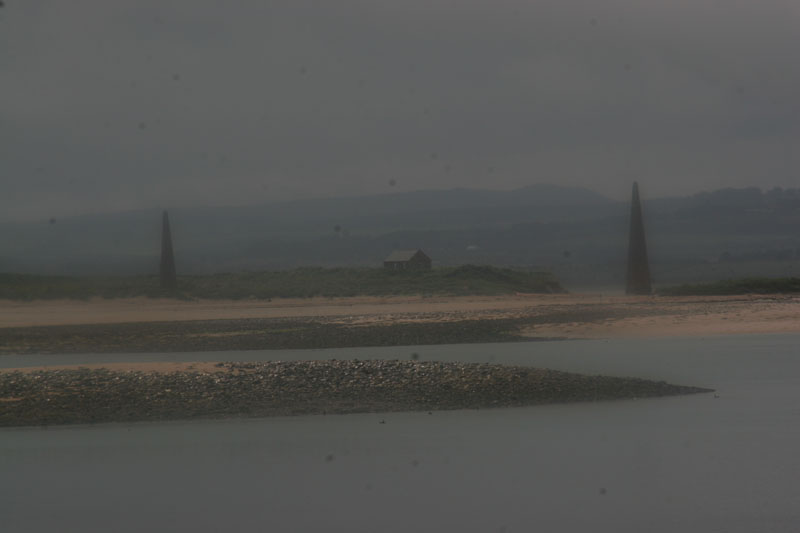 It was at this moment that I had to admit my lens was well and truly…. in need of repair. 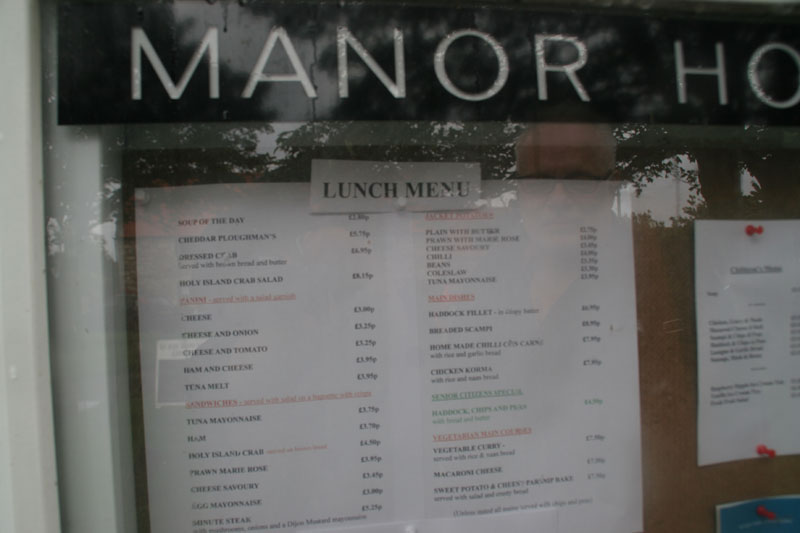 Many traditional British dishes, Chicken Korma, Macaroni Cheese, Chilli Con Carne, Prawn Marie Rose, and of course Holy Island Crab / Crab Salad.Our traditional British meals were cooked and served by Eastern Europeans which seemed quite fitting given the Islands history of being invaded.The priory on the Island had been a very significant religious centre until Henry VIII’s reformation of the church, and as we walked around it I couldn’t help but feel the solemness of the place. Also images of the U2 “Unforgettable Fire” album cover and the final showdown in the film “Omen 3” came to mind, which had a similar backdrop. As we took photos I felt some dark force might appear and give Larry a kick up the arse then run away leaving me with the blame. 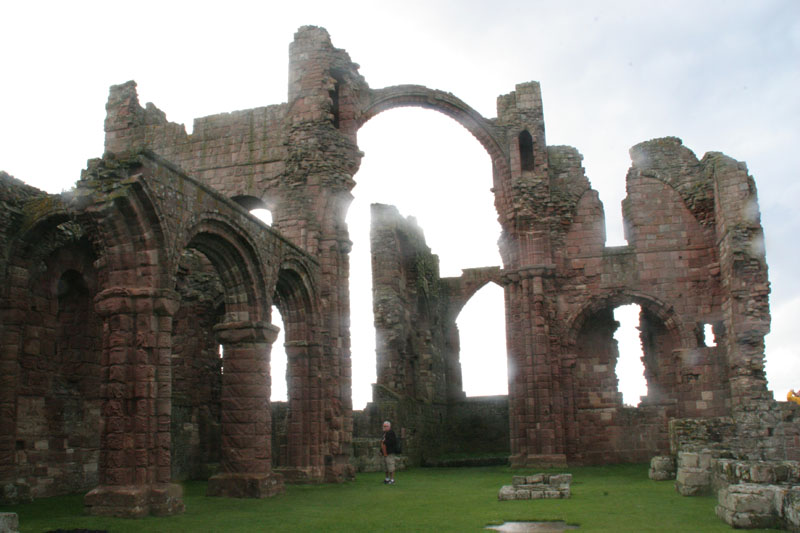 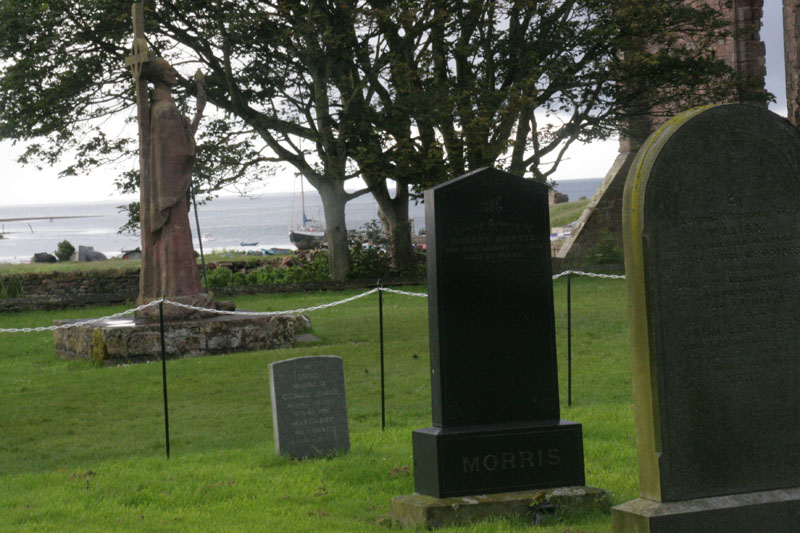 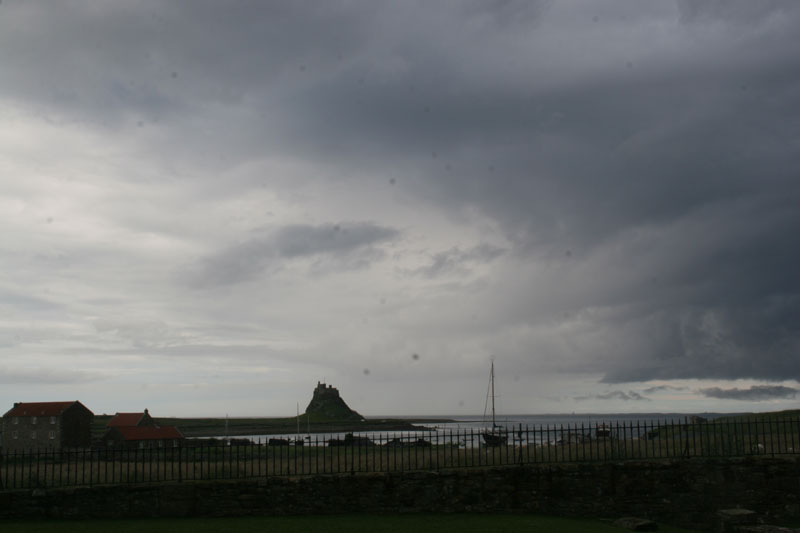 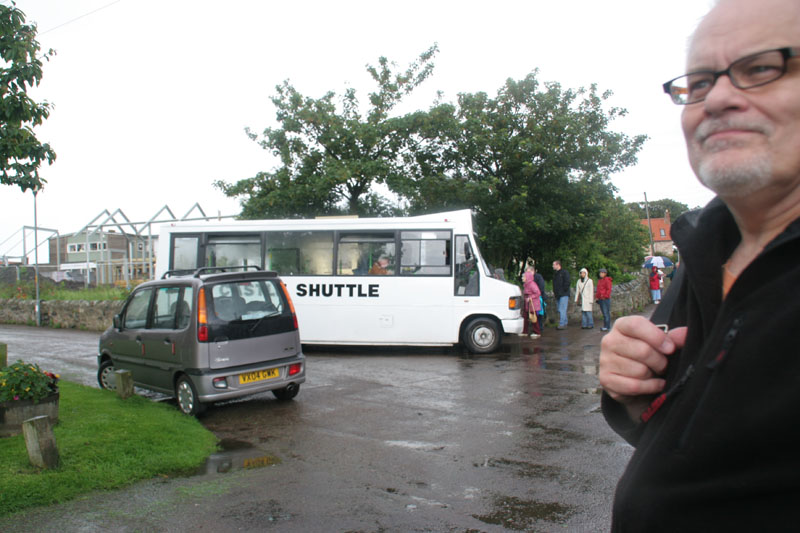 Larry I wonder if that’s the last Shuttle?

This is the look Larry had just after the Dark Force “Last Shuttle thought” kicked him, and look who’s getting the blame…. yes little innocent moi!

Imagine a route on a map in the shape of a square. The first stop, which is where we’re waiting, is on the bottom left corner. The Shuttle goes up the left side of the square, then across the top and then down the right side of the square to where my car is. Larry and I are waiting at the bus stop, the tide is coming in, soon they’ll be no escape for 12 hours. The shuttle comes every 15 minutes, but we’ve been here for 20 minutes but then being English I have a deep mistrust of timetables. Meanwhile lots of school kids are dancing around us, clipboards in hands. Just the sight of them starts me growling. Finally in defeat I decide to look at the timetable properly and realise that not only has the Shuttle Service ended for the day but we’re only 5 minutes walk from the car. How we laughed at Larry’s stupidity.

Just like in the TV series “The Prisoner” we escaped the Island in the nick of time.From the coast we traveled inland, fortunately Sat Nav worked here, well it did till we passed a large truck who beckoned us to pass, unfortunately it was right at the junction we should have turned off at, imagine the expression on the truck driver’s face when we turned around ahead of him and doubled back. I was so embarrassed that I pulled up to explain to him our error, but he didn’t speak English. 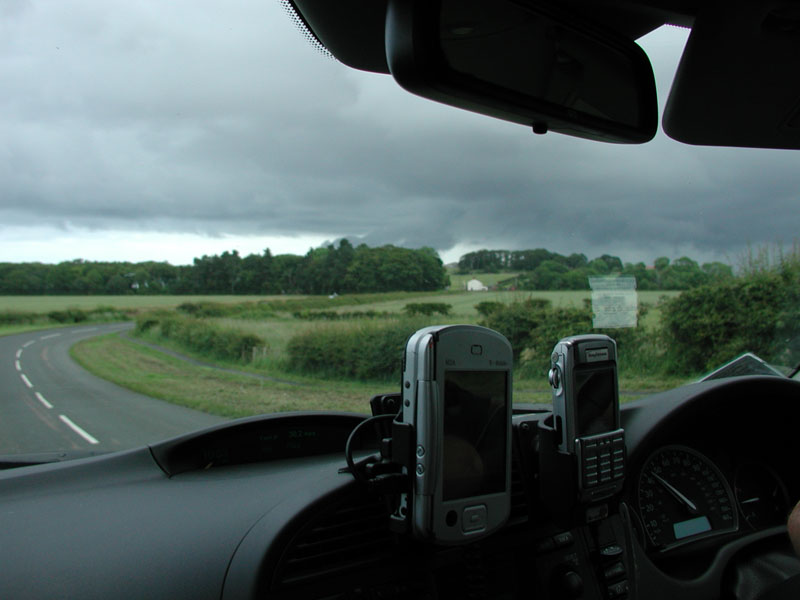 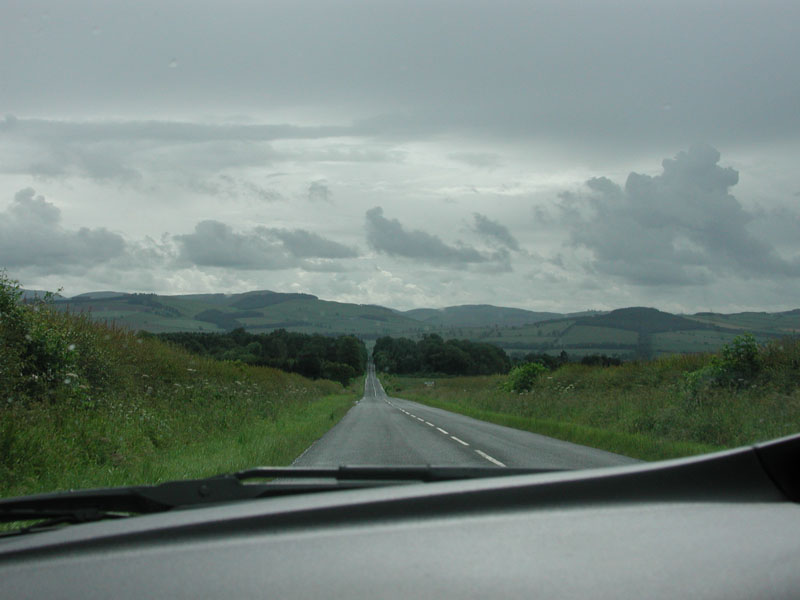 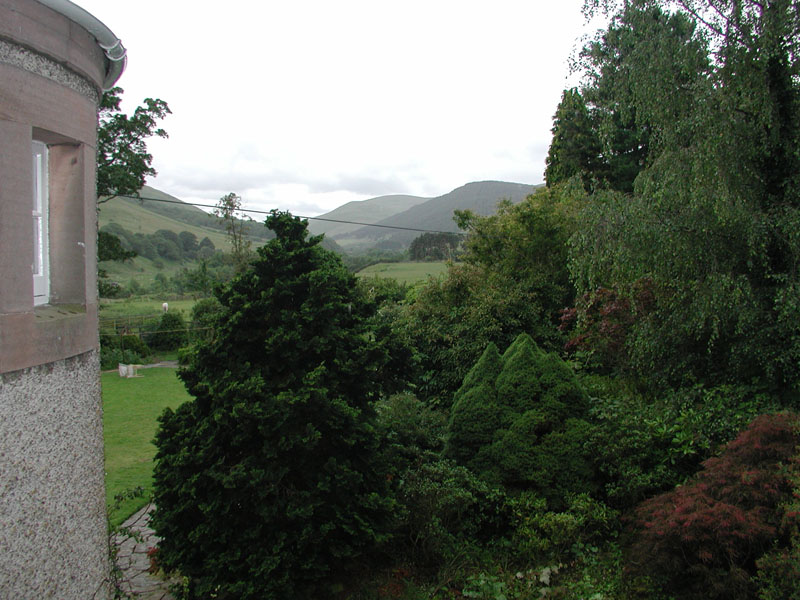 This is the view from place where we stayed.

Sat Nav still worked here, but mobile phones didn’t. I started to whine about not being contactable and Larry decided to give me a lecture about how it was important to let go of being continuously accessible. I snarled something about not being in the mood for a debate and went downstairs and asked the proprietors if they had an internet connection, and they did, so I was a lot happier.We walked in to our room and the beds were together. I immediately pushed them apart and Larry said “What’s the matter, don’t you trust me?” I said it’s me I don’t trust. I once slept next to a friend on the floor of an estate car, wed been talking about my sexy lodger all the way to Bristol that night and as I dreamed of seducing the said lodger I was woken to my friend saying “Simon what are you up to?”. I had one arm up his top and the other down his trousers. Imagine my surprise, anyway that was in 1988 so it doesn’t count now. Anway needless to say I’m not keen on sleeping next to strangers.There were two other guests with whom we had dinner. It turned out that they were a pastor and his wife so a great part of our repertoire went out the window. 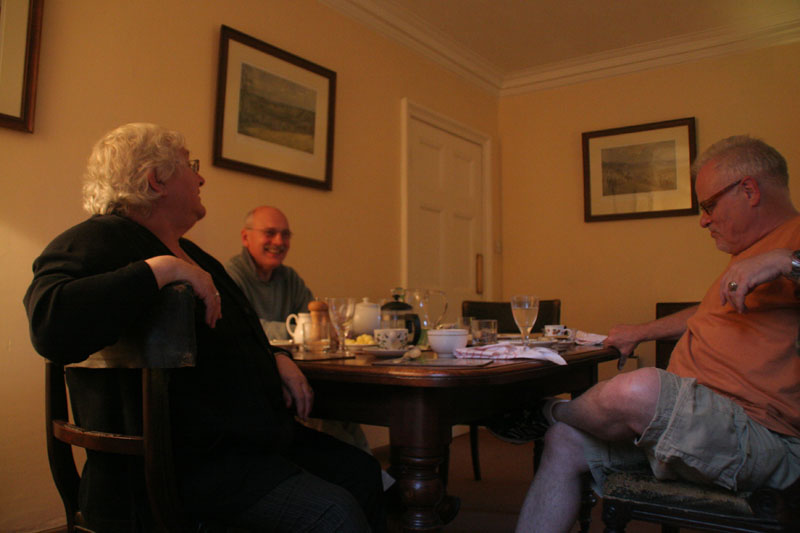 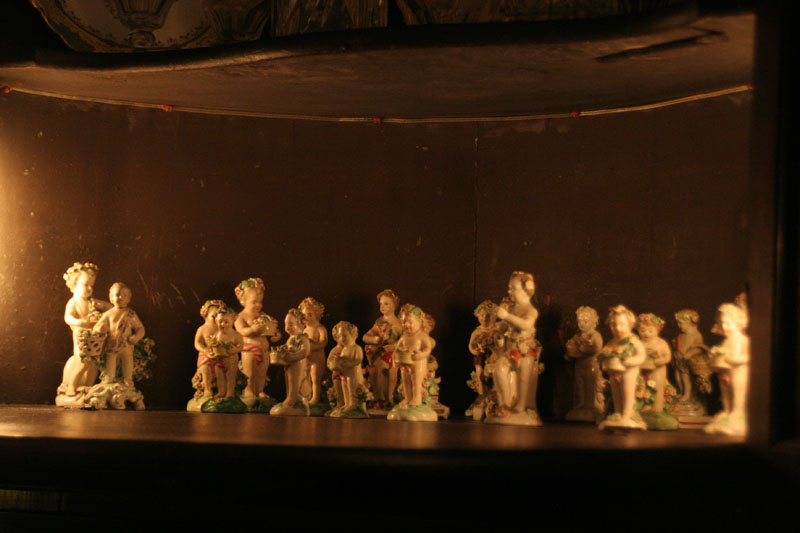 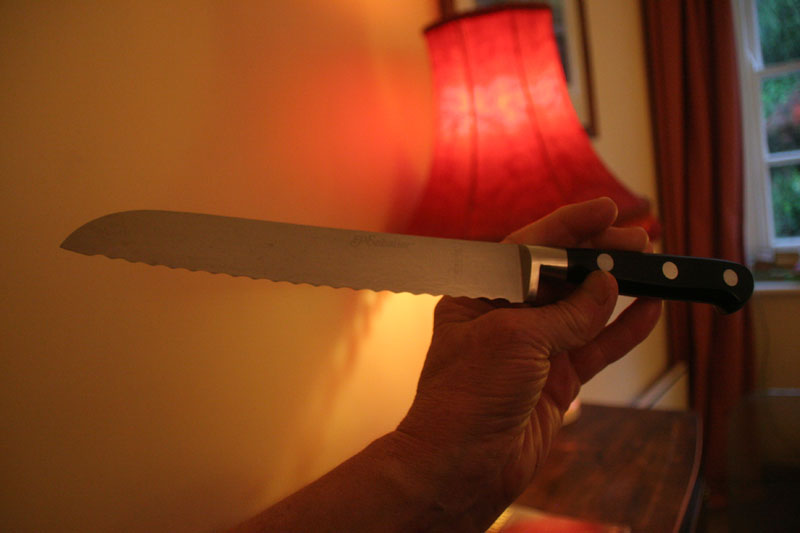 At one point the proprietor came in and offered me a swap. that I photograph her knife and email the image to the company that made it and for that I get to use their connection. It turned out that her knife wasn’t one of their products, their company had a different initial before the brand name. It seemed the lesson of the day was read the small print – and the timetable -. Larry retired to bed to read, and I got to use the internet in to the early hours.