Today things began to move on a bit. The movers downloaded Larry’s stuff from their Internet moving firm lorry, and we managed to get out and do something. Before going on to speak about what happened today I thought you might be interested have a glimpse of Larry’s pad. 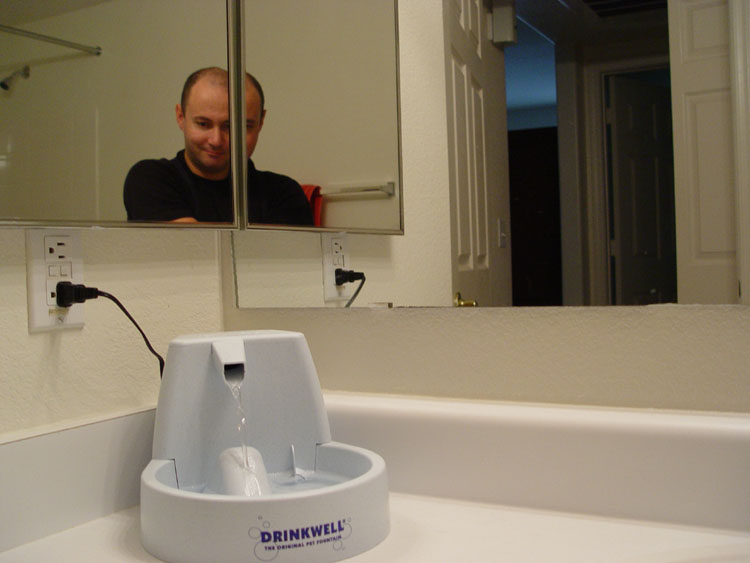 The kitty litter and their “drinking fountain” are kept in the bathroom, which means as I get out the shower I nearly always get a stabbing pain in my foot from a piece of kitty litter gravel. The drinking water from the taps tastes awful so the cats get mineral water.

Here’s a panoramic view of the main area of Larry’s new place. You’ll notice some red lines on it. I put these there to mark where you could fold the image if you printed it out. To download a large printable version either click on this writing or the picture itself. If you do so a new window will open, to get back to this one either close the new one or minimise it. The Large version of this may take a while to download. Of course if you have any sanity you won’t bother. But both you and I know you want to click on it…….
Go on then, I won’t tell anyone! 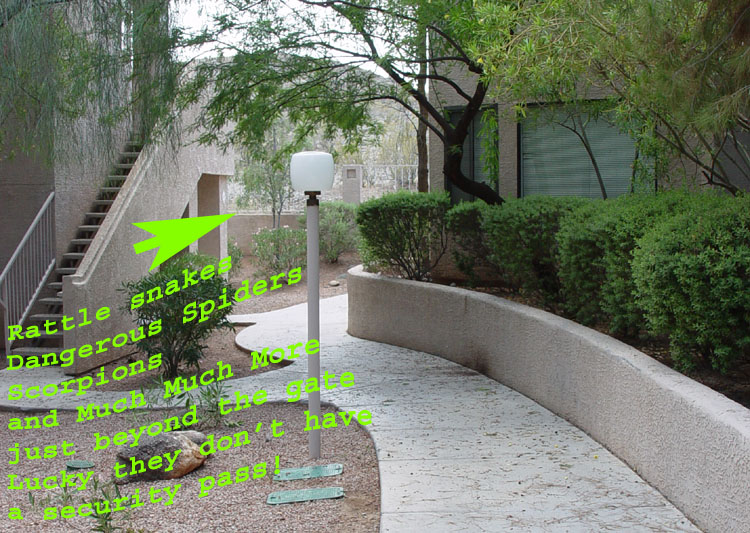 The desert starts about 40 feet away from Larry’s front door. 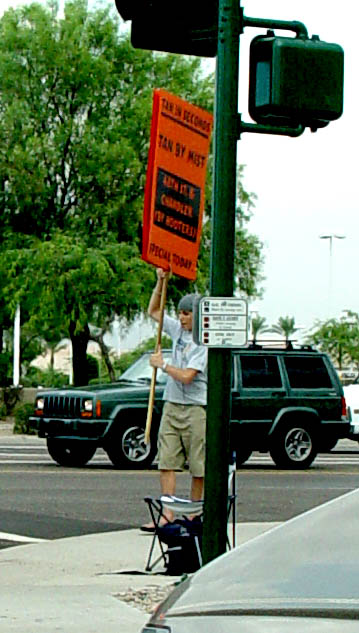 .
Larry and I decide to go out to a gallery. On the way we saw a boy who’s always at this junction with a placard. The placard suggests trying out a tanning shop……. hold on isn’t this the sunniest city in the States? Maybe he’s an art student, or psychologically unstable (same thing in my book). 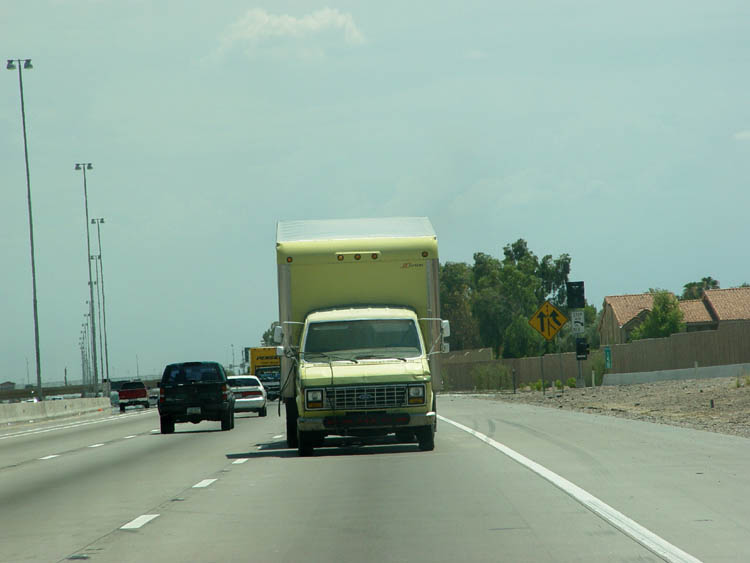 I was dozing off on the journey and opened my eyes to see the following site. First thought was of being back on an English road, then a moment of panic. This might be the last thing some people ever see……. what a cheerful thought. 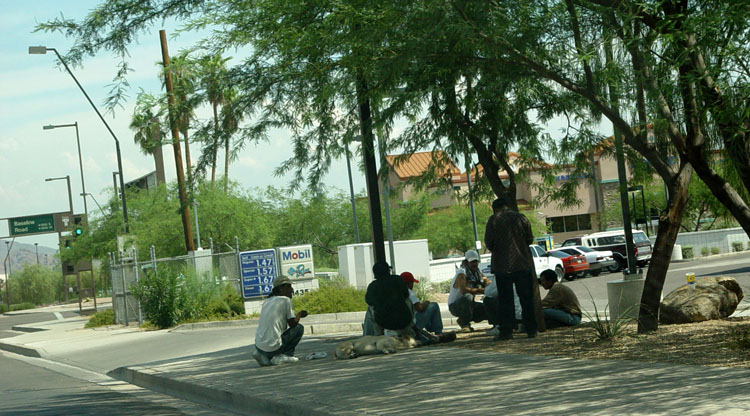 On the way Larry decided to give me a tour of some of the poor areas.
It’s funny how some people think it’s a necessity to show off their local destitutes….. DESTITUTES I said!. 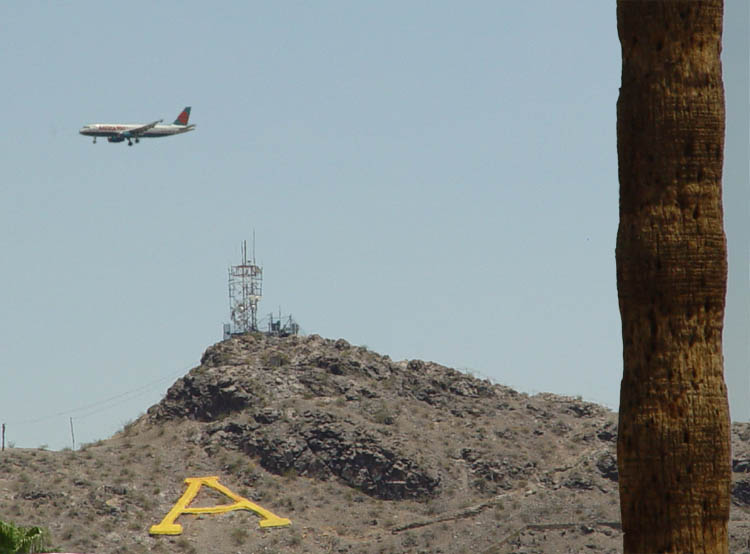 Just outside the Phoenix University buildings is a mountain. (A hill to you and me). Oh sorry it’s the “A” mountain, as in A for Arizona. Obviously there to help lost pilots. 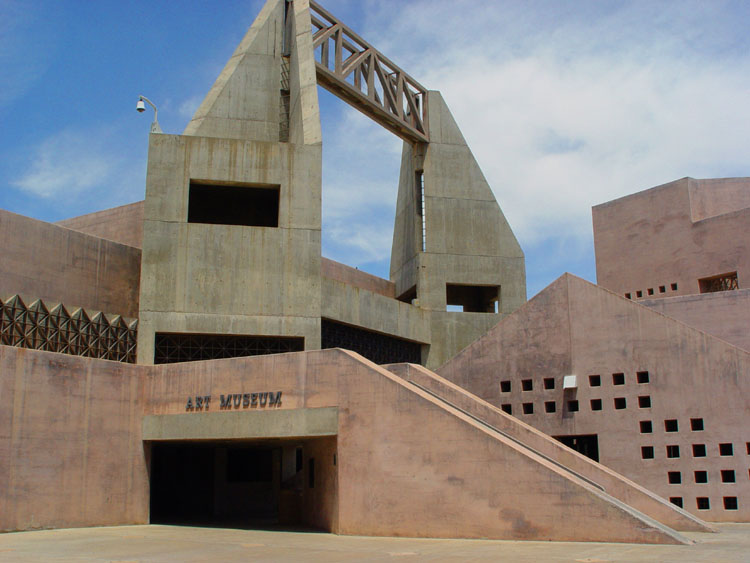 If only the London South Bank buildings had been coloured pink! 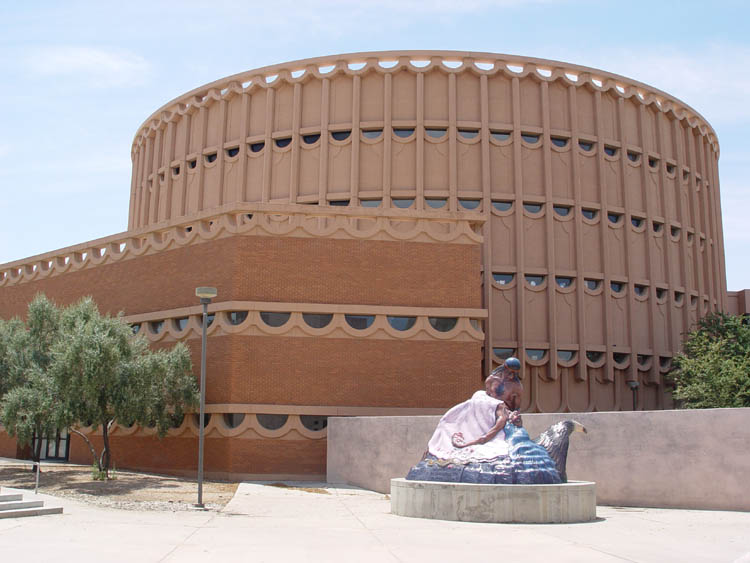 This building was designed by Frank Lloyd Wright’s son in law. It seems to be a cross between the Coliseum and a Sarah Lee Economy Strawberry Iced Gateaux. 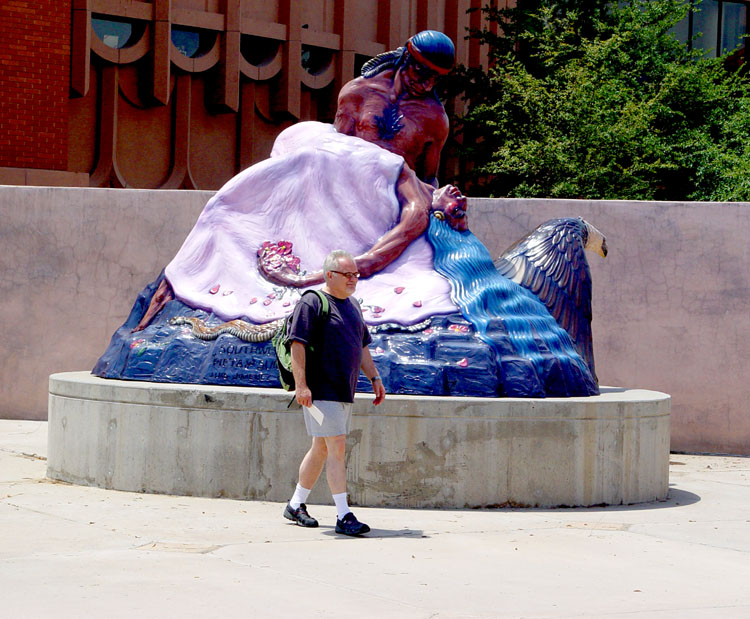 This statue is supposed to play on the stereo-typed vision non Native Americans have about Red Indians  Native Americans. Sorry I have a feeling Larry forgot to put his trousers on …… do you ever get those dreams too? I mean about yourself, not Larry. 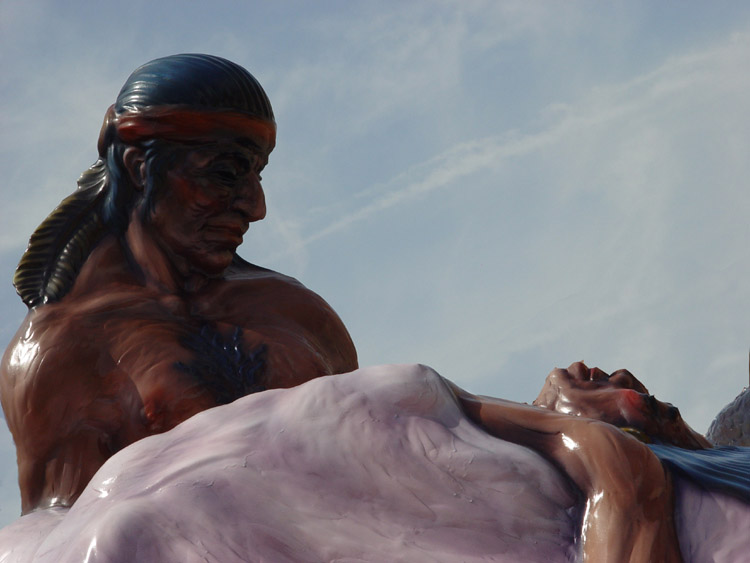 Detail of above – in case you couldn’t tell – no not of Larry …. the statue! 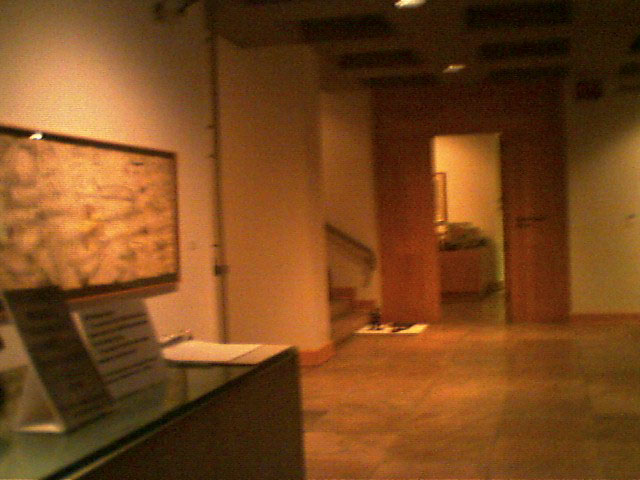 I wasn’t allowed to take photos in the gallery. I managed to take this one though, I pretended to do something with my mobile phone, and took it with it’s built in camera. In the near future as nanotechnology kicks in a lot of people will have a continuous video recording facility discreetly imbedded in to their clothing or hair or other parts of themselves. The notion of privacy is going to change dramatically then. Anyway the reason I took this shot was because there was a set of models at the bottom of and midway up the stairs, depicting a scene from the Godfather. A hitman dressed as a police man kills 3 Mafia men. I don’t know if you can see but there are 3 figures on the whiteboard. Two are laying down in a pool of blood, the other is the hit man kneeling and shooting a third figure up the stairs. Well I thought it was clever……. call me sentimental if you want. 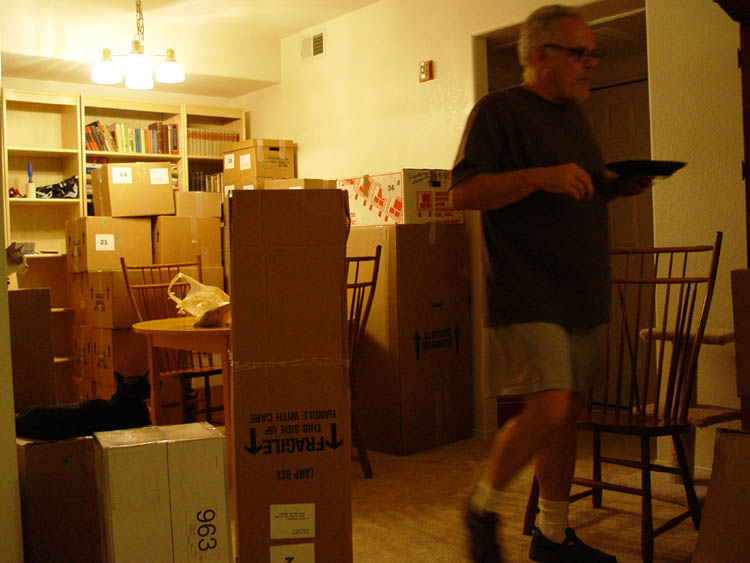 This afternoon the removals company delivered Larry’s stuff and his spacious apartment was spacious no more. 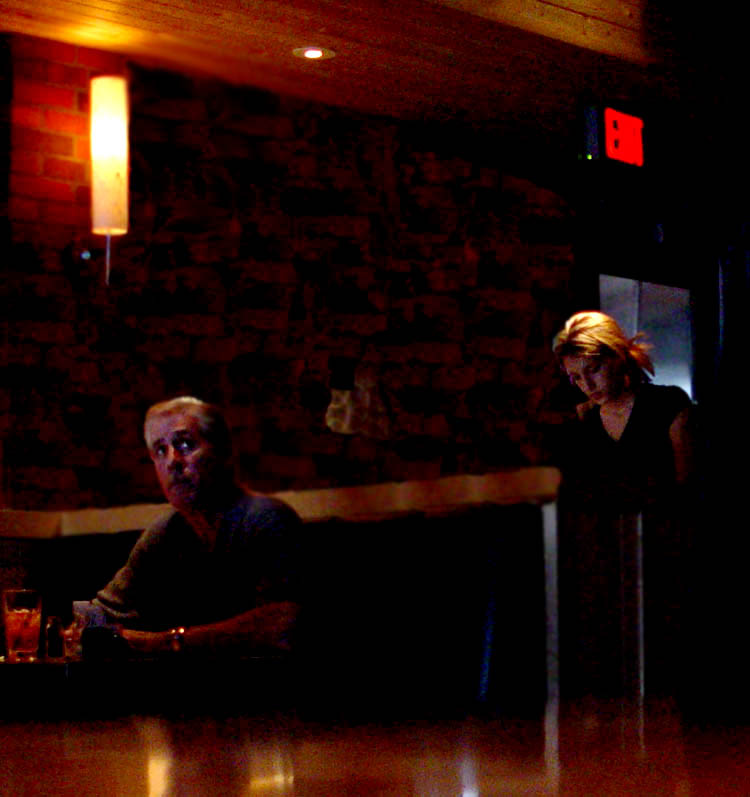 Larry and I went out for a meal. The waitress asked me what I’d like to watch on the TV above us, I said the news. This wasn’t such a good choice because every other table had something sexy or sporty ……… ours had death, killing,war and politics. Eventually I had to pretend I was watching someone else’s TV for fear of being lynched by the happy mob. Once again the picture above is meant to echo themes in Edward Hopper’s work. He’s probably turning in his grave when I say that. OK I admit it, I just included this picture because the waitress was pretty.

Eventually our TV moved off of the news and on to The Weakest Link.
The US version used to have Anne Robinson on it……
What do the Americans think they’re doing using a non native
American American ?…..
Is the contestant on the right a goatee bearded Tony Blair? 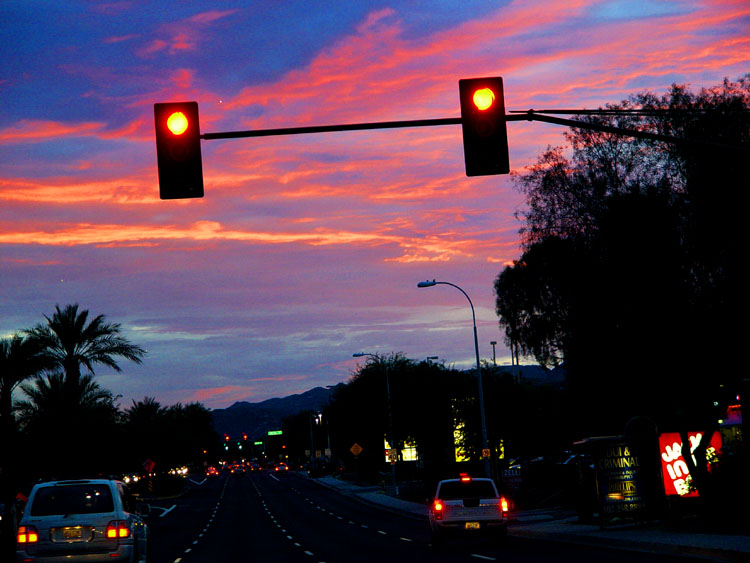 Here’s one for my Mum.

Tomorrow we’re setting off for the Grand Canyon so I may not be able to upload any pages for the next few days.
I’ll try my best to though.