Larry had the upper hand this morning, we’d argued earlier in the week about getting up early but today it was essential that we did so there was no discussion on the matter. Up at 5 and out by 6 and so began a day of moving and waiting. Travelling has a reality and experience of time all of its own. 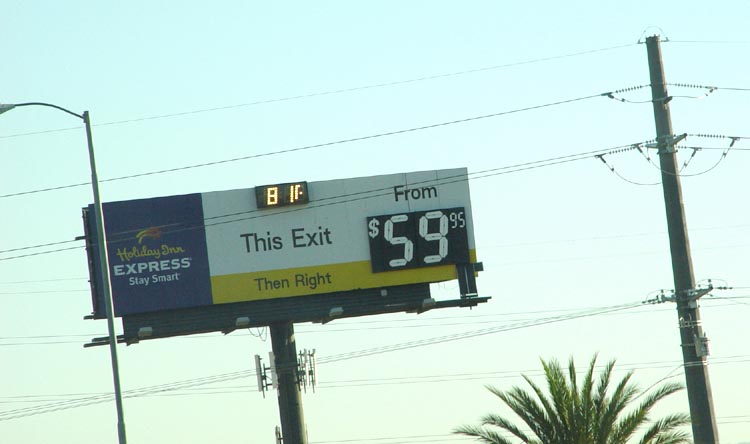 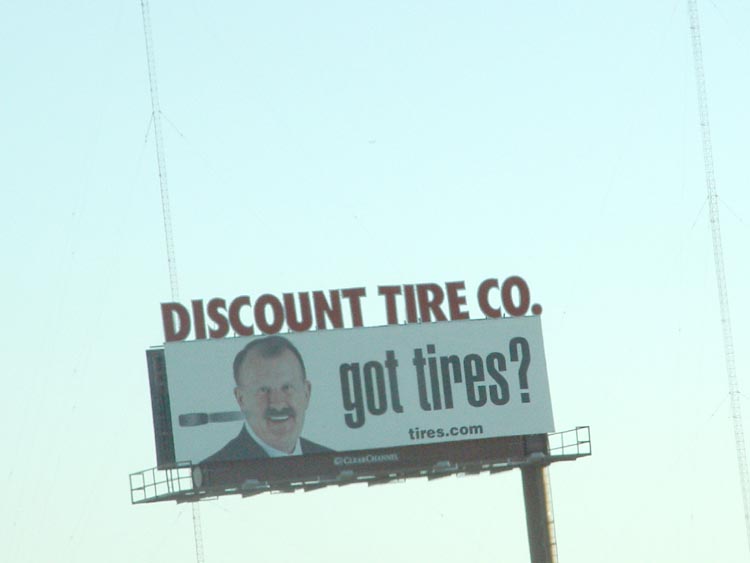 It’s the ladders that impressed me

Larry dropped me off at the airport, we’ve had a good two weeks of forming, storming and norming. As he drove off I mouthed the words “thank you” to him, but as with most airport goodbyes they are distracted by the practicalities of slotting in to the system. Exactly at the kerb side where Larry had pulled up was the check in desk for domestic flights, so I handed over my rucksack – always with a fear that it’ll be the last time I ever see it – and asked to be taken to my gate by wheelchair. Within a moment I was whisked away by a woman who was new to the job and this was only her second day. If she hadn’t told me I’d of guessed because within about a hundred yards she started to get out of breath. It’s funny what a lack of oxygen can do to one’s perception. I knew something was wrong when she started going on about how many airplanes there were out of the window. “Wow look at all those planes! I’ve never seen so many. My God there’s just so many, have you seen so many planes before?” ….. “We’re in an airport” I said, artly to reassure her and partly all the other people walking close by. I wanted it to be quite clear that the one with the mental problem was not me. I was a bit tempted to play along. “Air planes, I love airplanes, yeoooooooooowwwwwwwww” Then laugh in an excited and loud manner. But she was only trying to cope with a lack of oxygen. This theory was further reinforced when she said after about 3 minutes of pushing that we’d already covered a mile. “That’s amazing” I said.

Once we got to our gate I had 2 hours before our plane was due to leave. I tried to read but I was distracted. You see, as Oscar Wilde once said, “I can resist anything except temptation”, and I love watching people.

A sign had come up saying that 4 volunteers were needed. I was a bit worried that this may be alluding to cabin crew or worse the pilots, but it was actually asking for people to give up their place on the plane because they’d over booked. In return, those who gave up their place would get a 1st class flight in the late afternoon and would be given an unrestricted flight voucher worth $300. Within a short while the young man next to me was on his mobile phone. “Hello sarge, it’s private *****. My flights been canceled and I can’t get back until 1 am tomorrow. Yeah they’ve overbooked the plane and there’s no room for me.” Meanwhile over the tannoy there’s an appeal for further “volunteers”. After he got off the phone I asked him if he thought his “sarge” heard the tannoy and he felt he hadn’t. So much for vigilance. 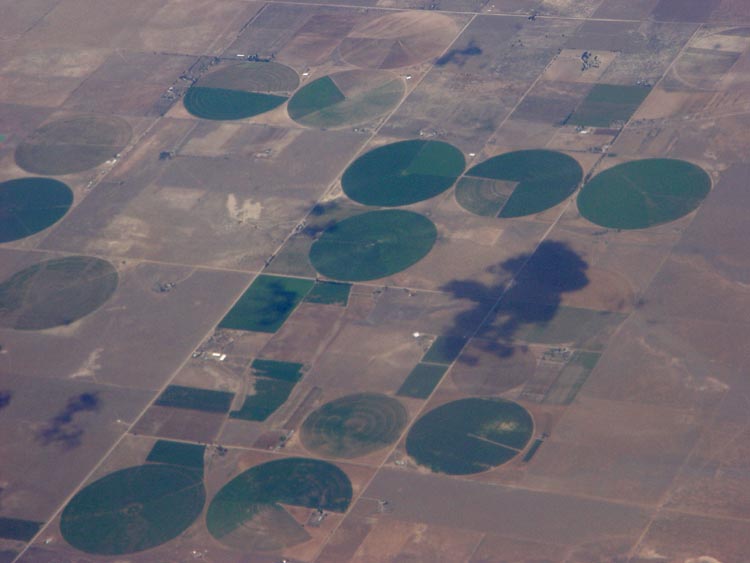 View from the plane. In the desert water dispersion dictates the shape of fields not land availability. 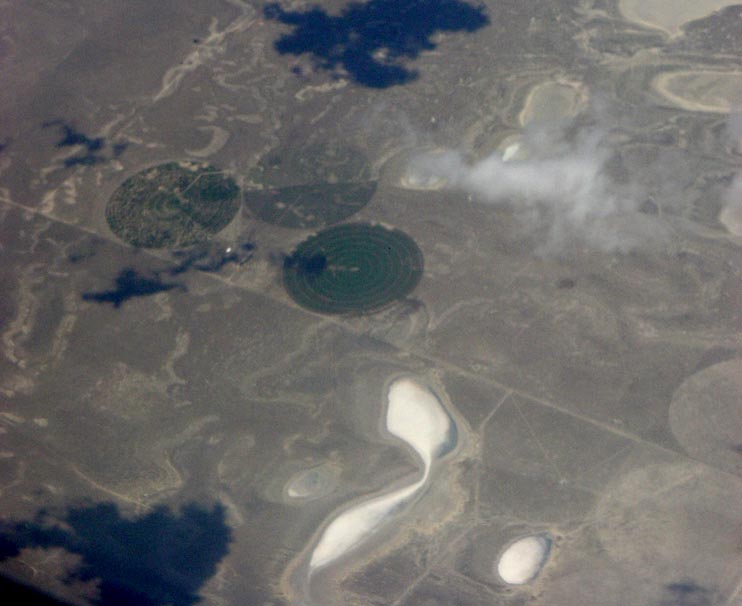 Well I thought it was interesting

Today things ran to plan. I got to Atlanta, found the Greyhound bus office, booked my ticket and waited. While in the office I got talking to a couple of women who were catching the same bus. Well it was their kids who introduced us. “Hey what happened to your arms?” little Doug asked. I explained, his mother apologised and I said it was ok and then the conversation turned to other things. This family was travelling to the same place as me.

This was a family feeling the repercussions of the war. It’s easy to forget the sense of abandonment that is a force’s family’s lot, but for me it permeated every moment of being with them. The boy in the orange T-shirt below seemed to take a shine to me, showing me his toys, talking about his dad, showing off a coin/medal his dad had given him. His mum and I also seemed to click, she had obviously spent those long nights alone reading and taking in the world and had plenty to say too. How people look at me and wonder at how I manage was how I looked at her. For me the idea of coping with 3 kids by myself with hardly any regular emotional support scared me. The other woman in the picture also had a husband in Iraq, and he had had enough and wanted out, much to her relief. 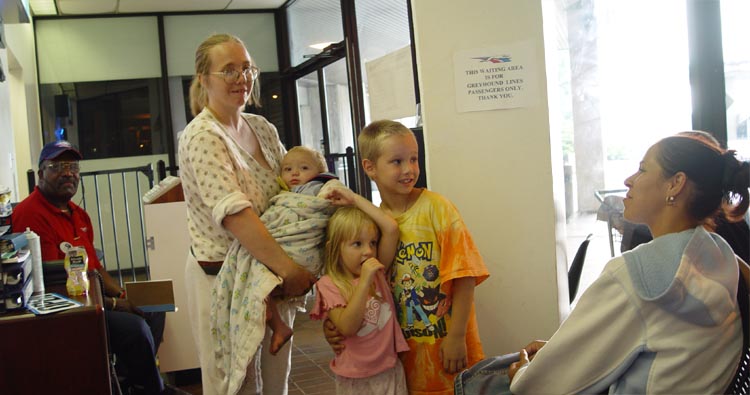 There’s a camaraderie in travelling with people. Even if I’m driving on the motorway at night and someone drives near me for while they’ll often wave or flash their lights as they or I start to exit. And so it was, with Doug and his family, that we became travelling companions for tonight. Doug sat near me on the bus and chatted, eventually I told him I had to sleep. He said he’d try to sleep too, so I closed my eyes and drifted off. When I woke up I carefully looked down to see if he was asleep. There to greet me was his face looking up at mine, he smiled, said “hi Simon”, put his arm around me and gave me a hug. When he let go I thanked him. I was torn between a feeling of worrying what people might think and a part of me that felt for the little mite. I had not known my father as a child and recognised his yearning.

As the journey drove us further South the night came down upon us. We passed through towns which seemed to be mainly made up of churches and chappels. A woman in a seat a few rows ahead of us started loudly preaching to another man. 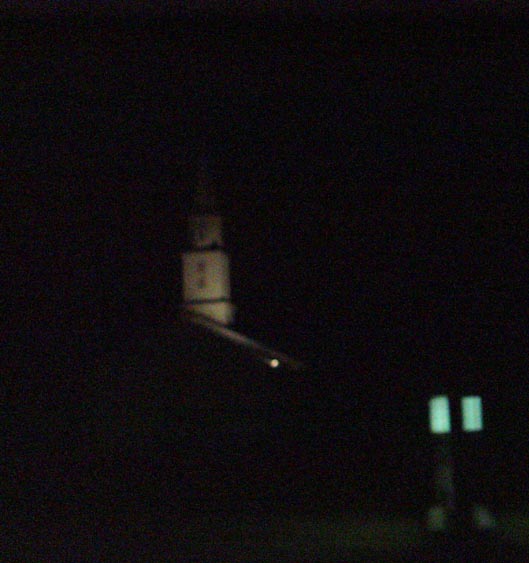 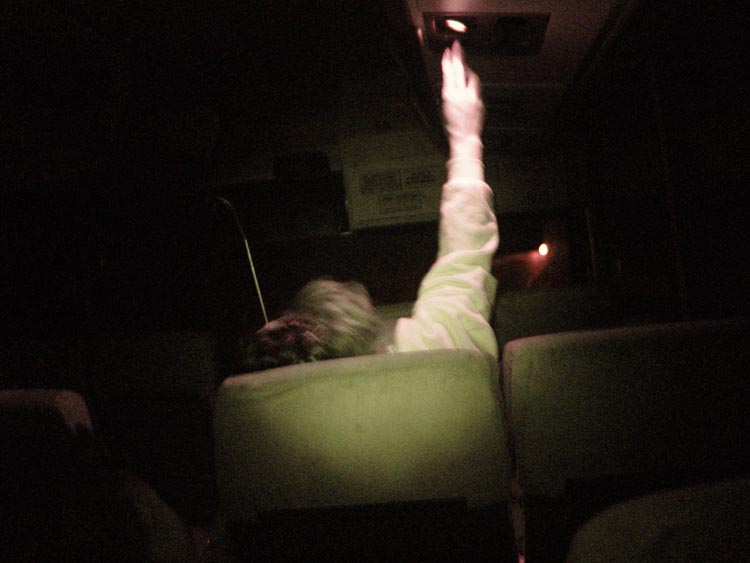 The woman (shown above, reaching for the light), started to get a bit frenzied, that was until the driver turned to her and said “Lady enough!” to which she said “Well I guess this is your bus so I’d better do what you say. Amen praise the Lord!” A couple of the the other passengers repeated “Praise the Lord”, so I said “Praise the driver”

As we drove further and further in to the Bible Belt the air grew thick with religion, so thick that it became hard to think. 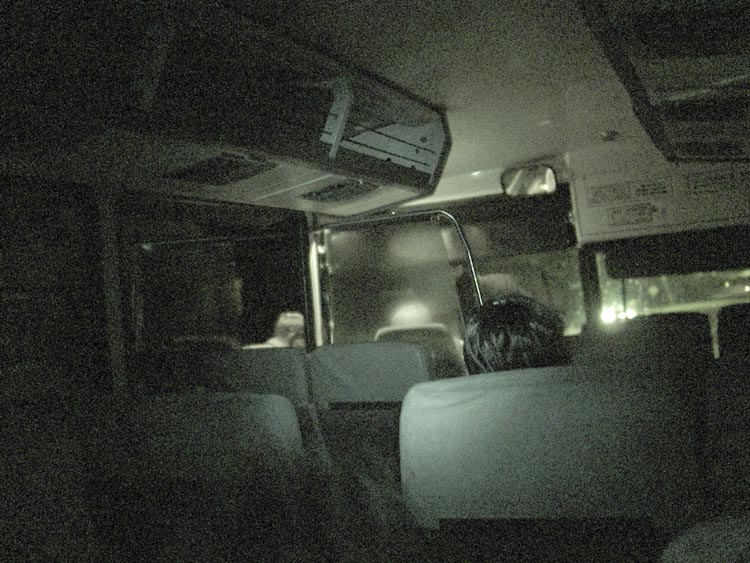 At one point the driver got pulled up by the police for speeding.

Police man: “We just got you comin down that road at 72 miles per hour.

Driver: “Well I just let it roll down that hill”

Police man: “so you just let it roll down the hill?”

Driver: “Guess I did. I know it was a bit fast”

Police man: “Well I’m gonna let you off this time but watch yourself in future”

The driver drives off slowly while mumbling “fuck off” under his breath.

You see it’s the same scenario whatever part of the world you’re in.

The religious woman says “You were lucky, God blessed you just then”

The driver turns around with that “And you can fuck off too” look on his face while saying “sure”.

After 5 1/2 hours of driving with only a couple of short breaks along the way we arrive at Savannah. Here we have to wait an hour for a bus that’ll take us to Hinesville.
There’s something about bus station waiting areas, they are communal but often a bit threatening too. This one had a few local people getting angry over a suspect deal that wasn’t going well, while at the same time the ticket office clerk kept coming out from
the information booth to buy sweets from a machine for the kids. 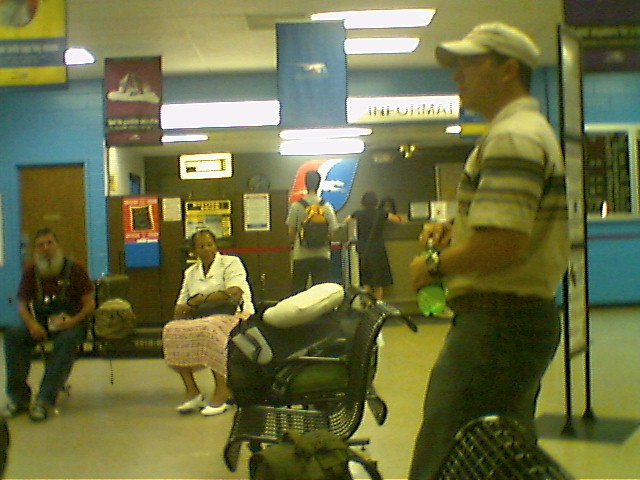 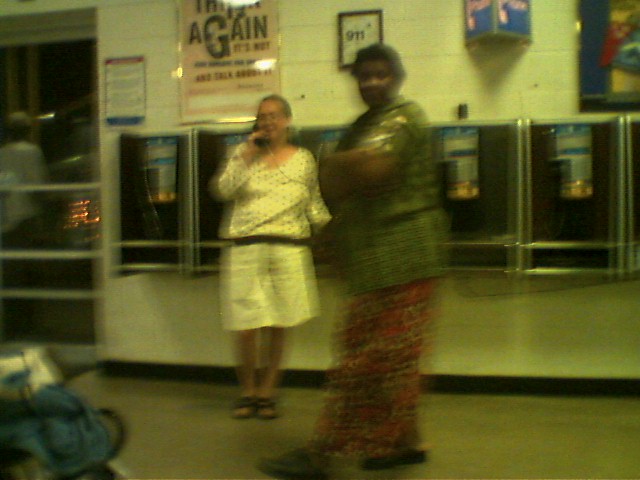 .
I didn’t think that getting my fancy cameras out would be a good idea so instead I tried using my phone camera. On the news there was a report of a woman who’d been raped and had managed to photograph the rapist and his car registration with her phone camera. The rapist was arrested within hours of his attack. 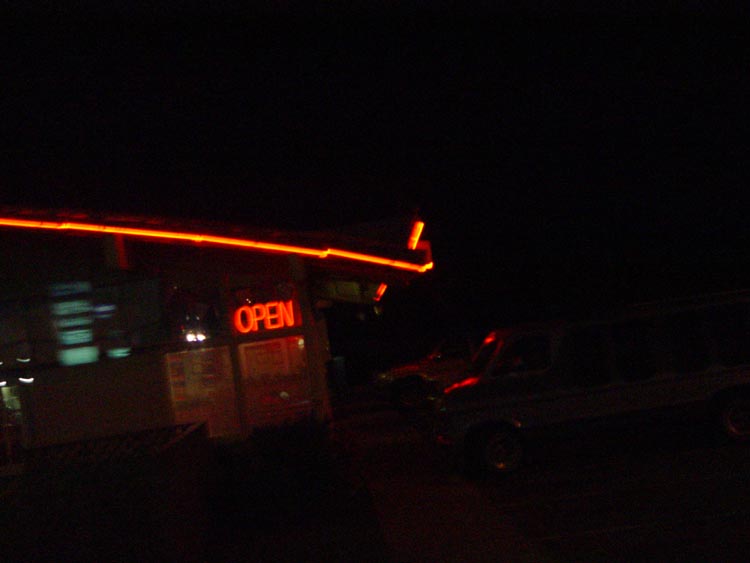 Amalia and her partner Jim drove me to their place. It was late, so after a quick drink and a short chat it was time to sleep. Tomorrow I shall tell you Amalia’s story.