I left the air conditioning on so half way through the night I pulled the covers over my shivering body and thought for a moment I was back in England. It’s a strange experience waking up in the middle of the desert with icicles hanging off your nose. So after peeling the ice from my face I made my way to breakfast. I could barely walk today after doing the Graceland tour yesterday, but every moment of pain was worth it, “you see my hands are achy and my knees are weak, I can’t seem to stand on my own two feet, my insides shake like a leaf on a tree. Who do you think of when you have such luck?” Ah ah!”I’m all shook up” The long drives don’t help either.

Anyway breakfast! Breakfast was “self serve”, and while I was in the kitchen masterfully pouring my corn flakes someone asked me for a coffee. “Sorry I’m a customer too, it’s self serve” …. “Oh” said the old man “I was looking forward to seeing how you were going to serve me”. “trust me” I replied “if the pay had been high enough I’d have managed”.

Soon after Larry and I sat down to eat the man at reception came over to talk to us. It transpired he’d lived in the UK for 20 years after moving from India. Hearing names of English towns such as Ruislip in the middle of the desert has an unnerving effect.As our conversation roamed we touched on how insulated from the rest of the world American’s tend to be and that a symptom of this is how few Americans speak more than 1 language. Given that America was discovered by Columbus, who was Spanish, I wondered why then America was mainly an English speaking country. One theory put forward was that the English would only trade and bid in English so that people who wanted to do business with them had to learn the language. It was a sort of empirical invasion through bribery. Another story Natu, the receptionist / manager, told us was that faced with a a disheartened Navy a British Ruler’s spouse said that a lot of the problem was a result of the men being threatened by the death sentence of Walking The Plank, and amongst many other mistreatments not being fed properly. The spouse suggested that the plank be cut in to sections and each sailor should be given a piece of wood that was to be cut in to four equal parts, a drink on one piece, bread on another, soup on another, a main dish on the last one. (I elaborated that bit). And this came to be known as a square meal. It’s amazing what useless information you can pick up in the desert over breakfast.

I asked Larry why Native Americans are also called Indians and he said it’s because Columbus was trying to sail to India when he came across America so he called them Indians and since then the name stuck. So after all these years seeing “You’ve had the cowboys now try the Indians” written across plumbing vans in Ruislip I can see that there is actually a direct connection.
And not many people know that! 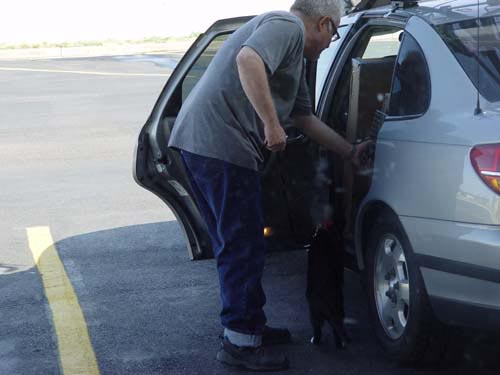 “Sonia” needs no coaxing, and like a well trained sheep dog obediently gets in to her
cage, unlike the other little moggy who decided to play hide and seek.
Larry put her in the bathroom. Making the sign of a letter T with his hands, he said
“Time out Athena”. Athena looked at him as if to say “I don’t speak your language
so I can’t have time out ok!? I’m 17 damn it! I’m almost a woman and
you still treat me as if I’m a kitten”

We covered over 700 miles today most of it along what was once
Route 66 and is now the I-40. 700 miles of desert is a little
monotonous to an untrained eye such as mine. 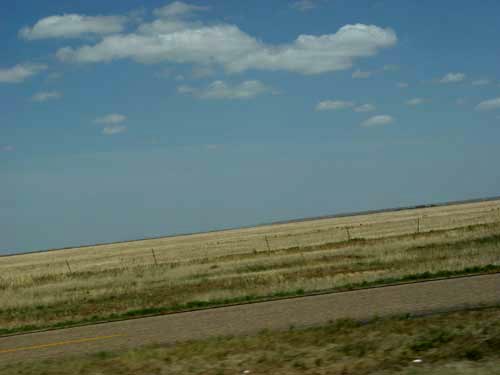 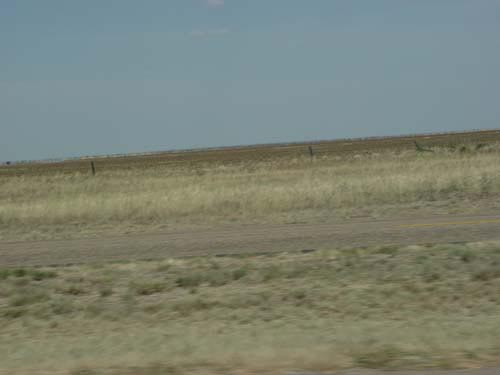 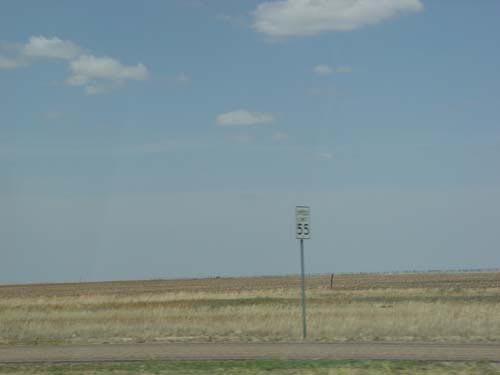 More desert , this time with mirage, water like, horizon. 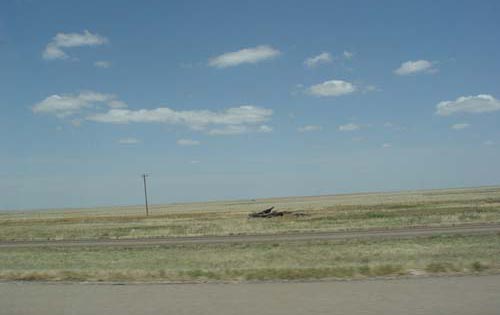 And you’ve guessed it ……….desert 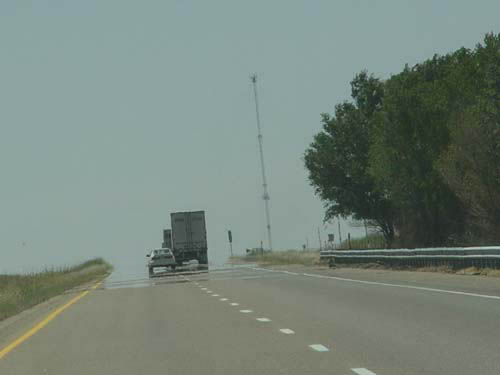 Some trees!!!!! Maybe there’s something different over the hill? 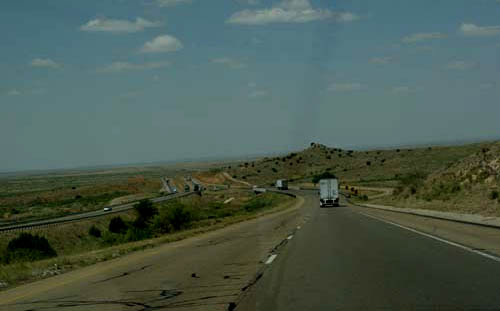 Awestruck by the view I fall asleep. Larry wakes me up in order to tell me how annoyed he is at a lorry that keeps passing him, then slowing down so he has to pass it. The answer is due to a conflict of driving styles. Cars, especially those using cruise control tend to keep a constant speed, where as trucks which rarely travel at their lawful speed go slow up hills and go as fast as possible down them. So basically if all truck drivers just fucked off we’d all be a lot happier. That is until we didn’t have any food in the shops, a trivial matter though when seen in the grand context of motorway driving.. 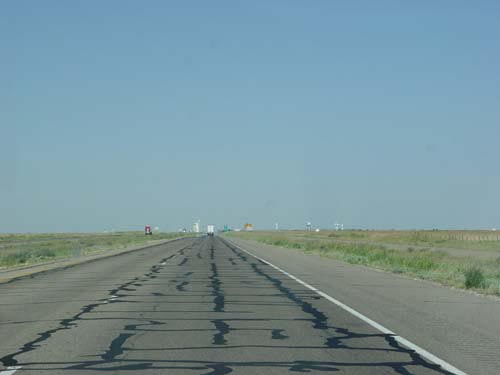 In the distance on the horizon is “The biggest cross in the western hemisphere”.
How did this come about? I don’t know, but Larry has a theory that one day some local farmers were watching people pass by on the motorway totally oblivious to their existence. “I know, let’s build a massive cross, that’ll make them look”
And so it came to pass, and so did we. 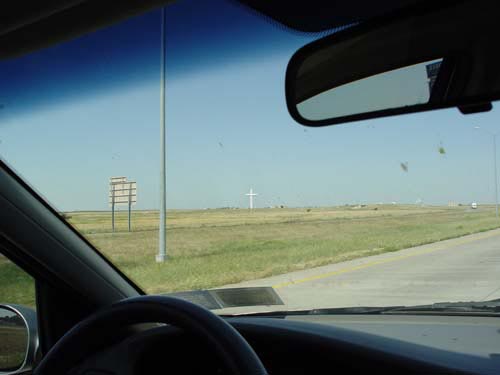 Cross in the distance 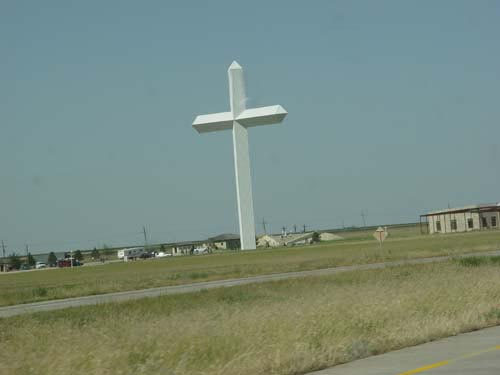 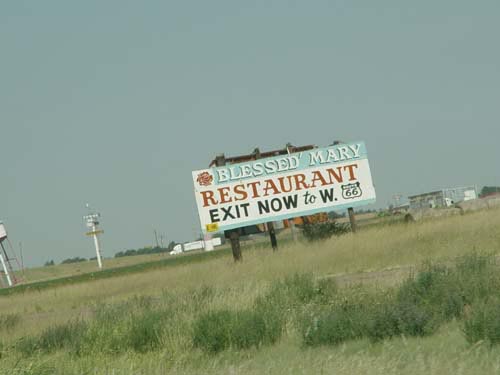 I hope that cross wasn’t an elaborate advert to get people in to the restaurant? 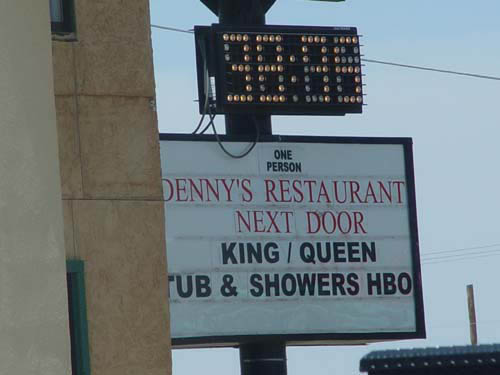 We decided not to go to the Blessed Mary. The sign above mentions Denny’s. We’ve eaten at Denny’s restaurants a few times on this journey. Larry told me that once they
got sued for racial discrimination because they ignored a group of black men. Unfortunately for Denny’s the men were secret service agent’s. 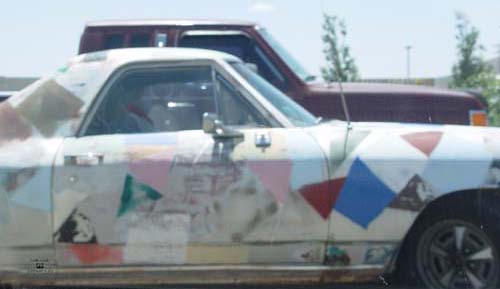 In poor places cars get a bit more patched up before they’re disposed of. 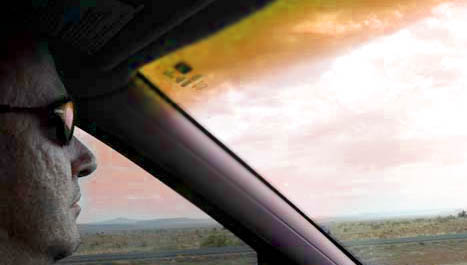 OK so I like to pretend I’m in the Terminator film sometimes. Sad, I know! 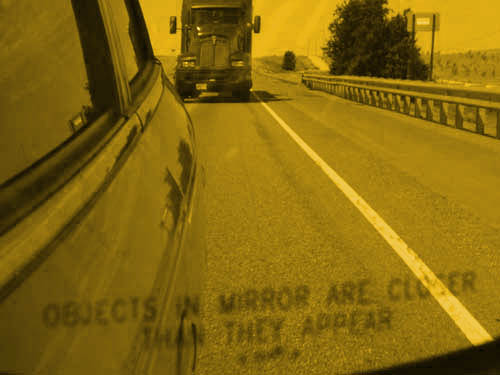 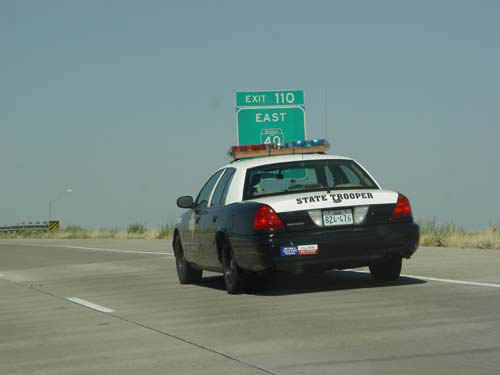 Larry has a radar speed trap detector. Every time it beeps he tells me to slow down a bit
even though I’m going slower than the speed limit already. If I had long arms I’d
sneakily unplug it when he wasn’t looking. 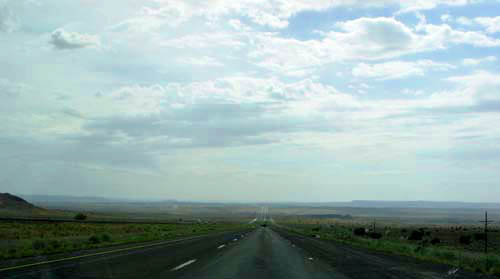 The road is long 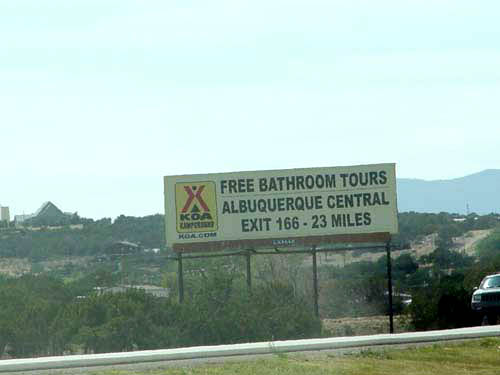 This sign was only beaten by one on a Native American reservation which read “Native American handicrafts, pottery and phone cards next exit” but I couldn’t photo it in time.
Anyway obviously there’s a lot more to Bathrooms in this region than we’ve been led to believe. 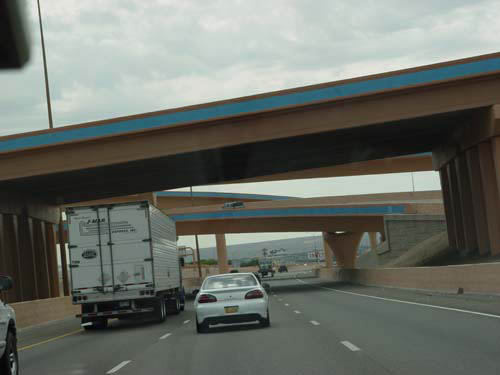 A pink and blue flyover, quite striking at first but after a further 3 hundred miles
pink stonework was the norm and quite sickly eventually 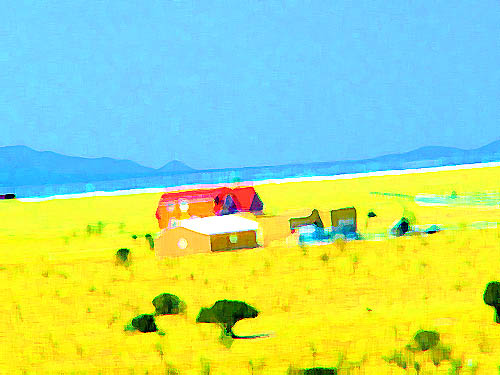 Computer’s aren’t half clever ain’t they? 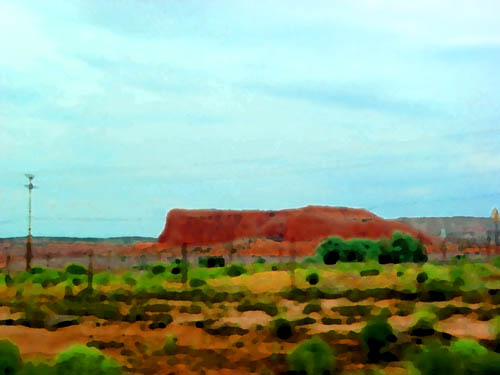 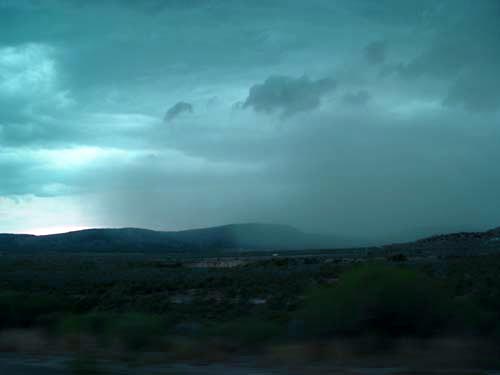 A storm gathers in the distance 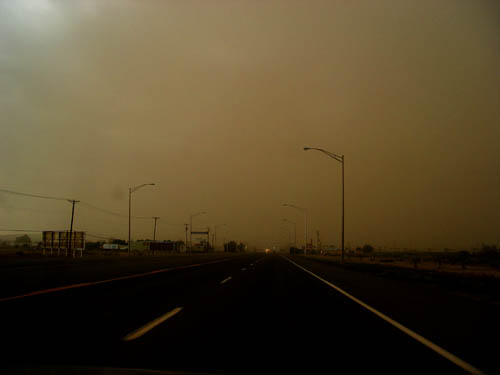 Then it sweeps past us 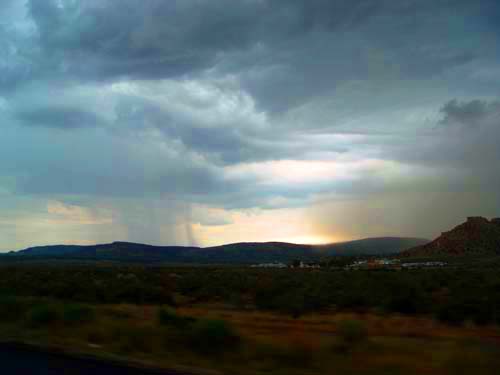 And then it was gone ……. aaaaaahhhhhhhhhhh 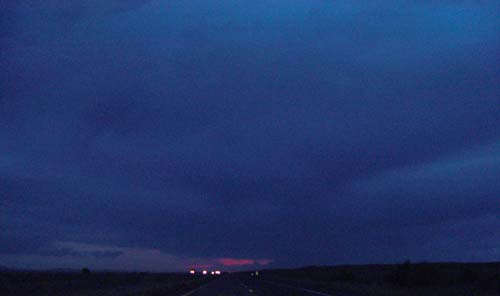 Only it wasn’t, it followed us all the way to Flagstaff, where we stayed for the night.