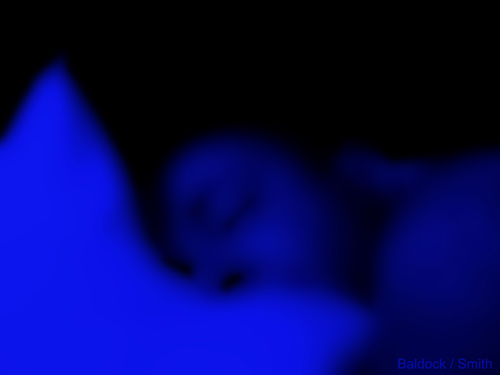 I am here, sleeping in this cramped room, it doesn’t matter what part of the day you choose to travel, it still mucks you up for a day or so. There’s a spiralling out effect going on, first I’ll get acquainted with the room, then the hotel, breakfast, the food, the service, then wander around the local neighbourhood and in time journey out of the city.

This is a dreamy world for me, the original birth-land of my father, a place of stunning architecture, it looks familiar but beneath that façade is strangeness. The people look European but there is something disconnected. It’s as if I’ve walked in to a world where no one can hear me. 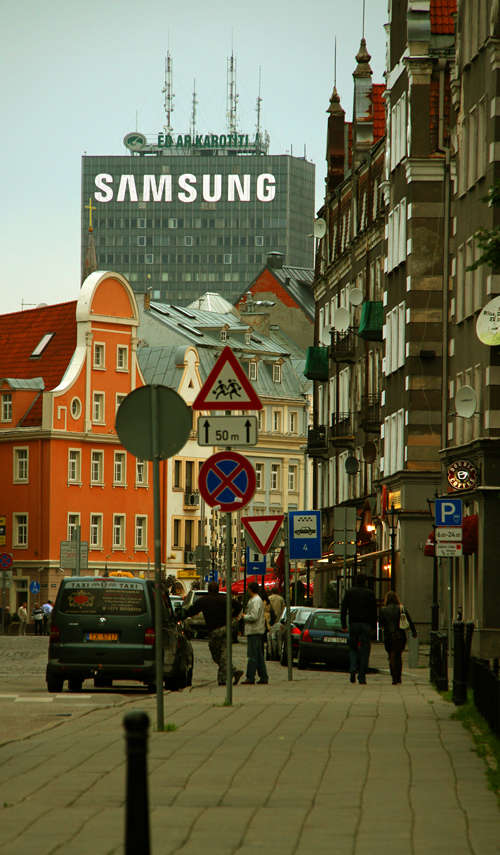 “The room is much smaller than the photo in the brochure” I say to the receptionist.

“All the rooms are the same” She replies matter-of-factly.

I shake my head in disbelief “No they are not, my cousin’s room is larger”

“It may appear that way but it is not, they are all the same size.” I would say her tone was stoney rather than calm.

“Also, the travel agent said we would have a view of the river” 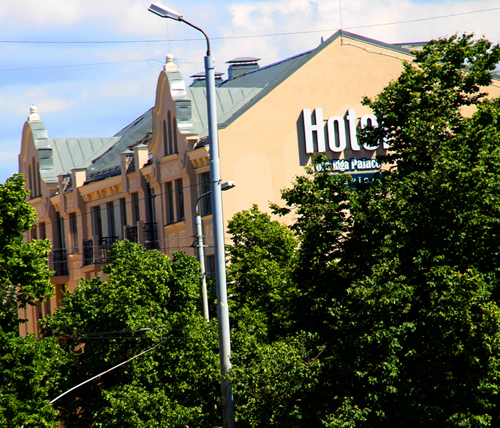 This is the Hotel from the river

“Look I’m not happy with the room we’ve been given, in the brochure picture there’s space between the bed and the desk to walk in”

“It’s just the way the photograph was taken”

“I’m a photographer, even with the widest angled lens I have I couldn’t create that amount of space. I don’t think this is fair and I will make my feelings known on the Internet, on the feedback pages for this hotel”

“I’m sorry, all the other rooms are booked up, I shall see if there’s anything we can do and let you know tomorrow.”

“Either I or one of my colleagues will”

I went back to my room.

A few minutes later the phone rang, it was the receptionist with an offer of another room… apparently it was the same size but the furniture was arranged differently… In this hotel all rooms are equal but some are more equal than others. 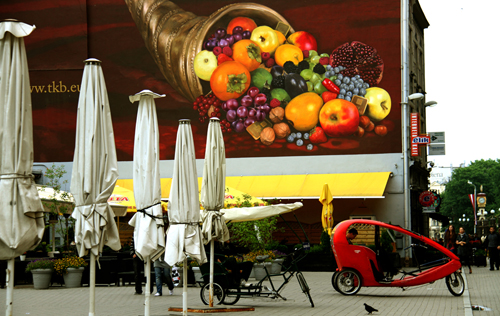 After re-camping Sue and I set off to explore the locality, she had read about a local bar called Alibi which other English people had recommended on the Net and was only 2 minutes from the hotel and so this was our first port of call.

The young woman who ran the bar, along with her husband, had been slightly renamed “Daisy” by her “reviewers”. Daisy was warm and friendly. She seemed a bit vulnerable and wanted to help.

I feel that the internet has done Latvia a disservice in terms of not providing a more rounded view of the place, on one hand you have the “advertisements” and on the other the “negative feedback” particularly from the English. So if anything I’m hoping this diary gives you a more balanced view.

If there’s a core theme running through this diary it’s one that related to racism. I’m not going to get all politically correct, but instead want to look at it from a different angle. In 1938 my father left Latvia to live in South Africa , at the time there were 80,000 Jews living in Latvia , over the next few years over 75,000 were killed. Forces were at work in the background, both large and small, and this is my second theme, the large and big things in our lives and how they interact and perpetuate each other. 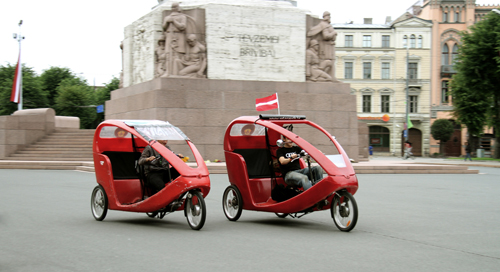 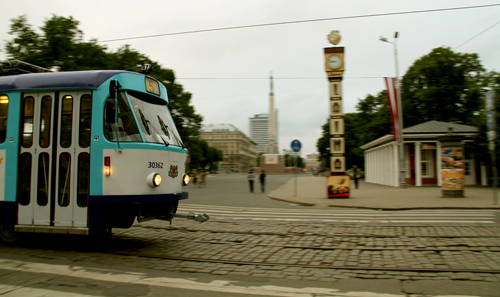 Eddie had taken us for a walk last night and shown us where he’d lived, but when he lived here there weren’t street lights and the place was far more foreboding. 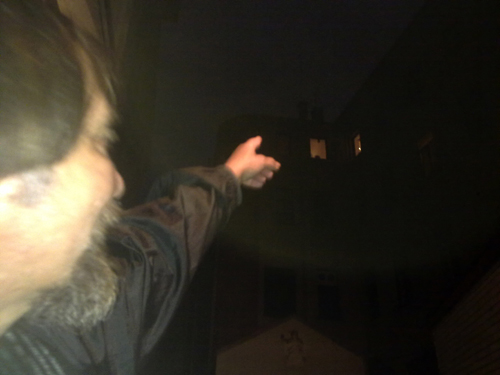 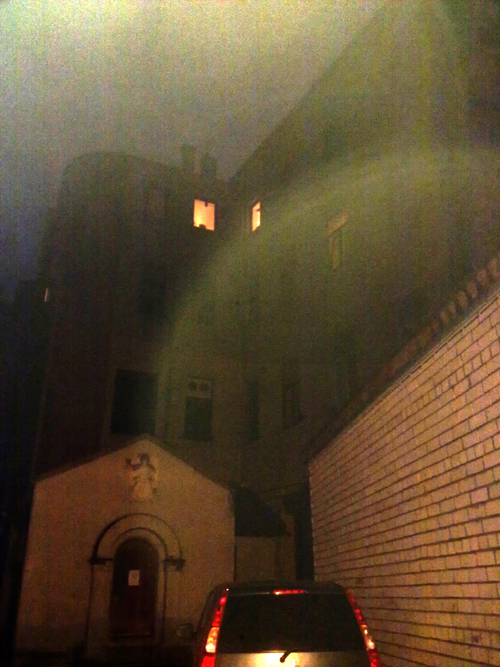 His memories were so filled with bad associations that meant he didn’t even want to walk down certain streets.

So we walked along the river, looked at the beautifully lit bridges and took in the feeling of safety that seemed to permeate the place. 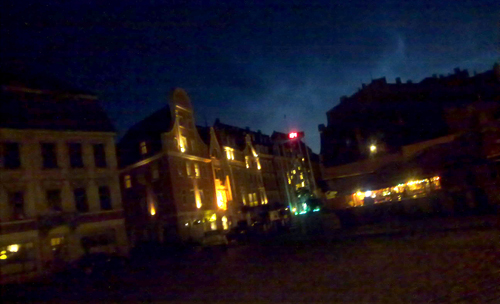 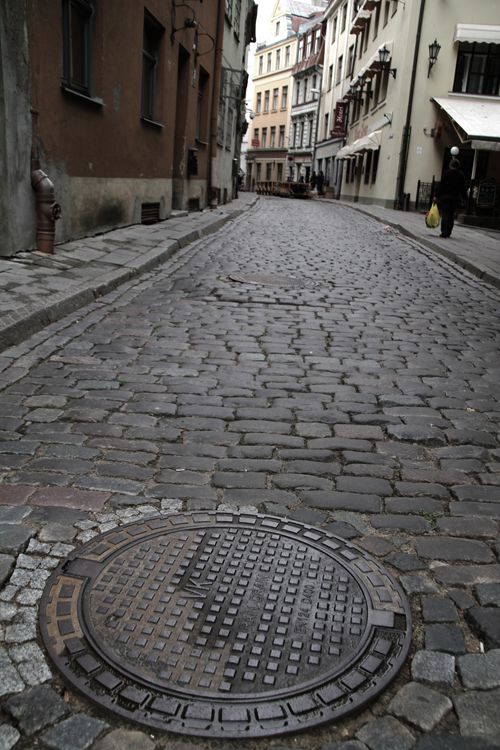 Riga is akin to Disneyland in that in many ways it’s a pretence (Even during the Cold War it was the same). The buildings are beautiful in the old city, the police have clamped down on crime and the bars and restaurants are very inviting. 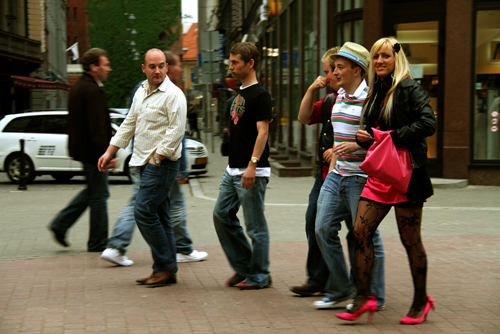 For the last few years it has become a Mecca for boozy stag nights and needless to say it has a reputation for sex tourism. Latvia however is the poorest EU country with over 20% unemployment, scratch below the surface, look around at the beggars, go beyond the city walls and you’ll start to see that all is not well in Latvia . 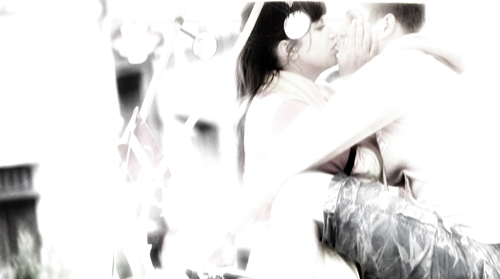 This was not the Latvia that had existed in 1938, nor the same as the one in 1941, or 45, or 53 or 91… If Latvia has a distinguishing mark it’s this. It is a battered land of transition. It would be unjust of me to try to paraphrase its recent history, but somewhere in these big events the scars that still haunt this country were created. 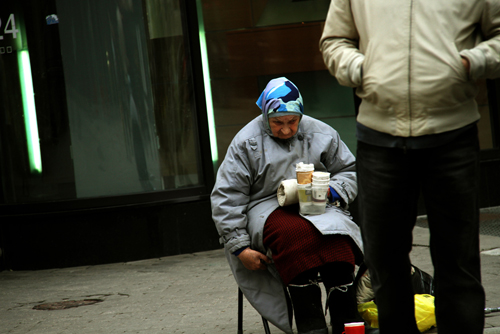 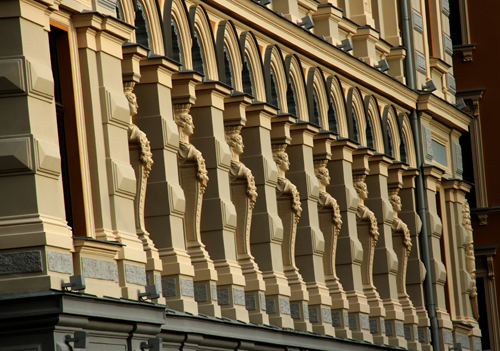 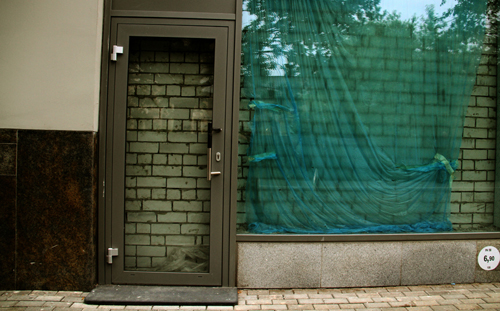 My grandmother was born here, she was one of 16 children, 13 of which died of Russian Flu in 1889. She married a man from Estonia, they settled in Rezekne, which is 150 miles to the East (near the Russian border) and had 5 children. Her husband went ahead to South Africa with one of his sons in order to raise the money to bring the rest of the family over, but he was a gambling man and spent most of his earnings on that. In 1938 his son raised enough money to bring over my grandmother, my father and his brother. The eldest daughters stayed in Latvia , one was killed by the Nazis and the other “escaped” to Siberia .

In July 1940 the Russians began a “year of horrors” against the Latvians in which at least 27,586 persons were arrested many of whom were deported, and around 945 people were executed. So a year later when the Nazi’s took over from the Russians they were seen as the liberators. 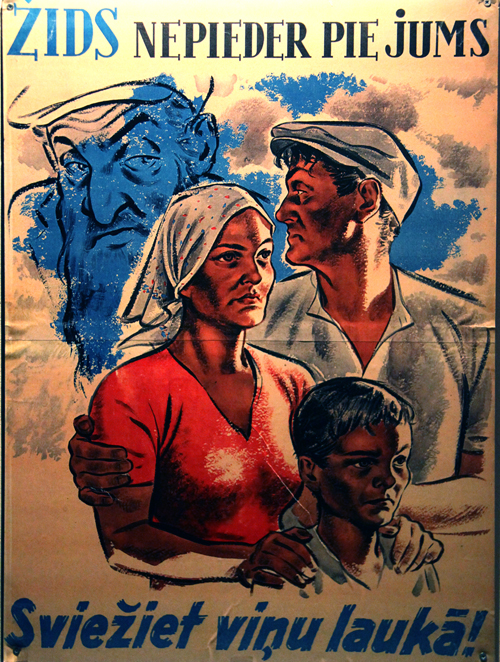 Immediately though the Nazi’s took control of the government and started to overtly blame the previous years persecution on the Bolshevik Jews. The Latvians were quite happy to help the Nazi’s sort out the Jews and within a short time close to 75,000 of the 80,000 Jewish population were put to death. 25000 Jews from Riga were put to death in the Rumbula Forest on the 30 th November and the 8 th December 1941. A further 20,000 Jews were brought in to Latvia from other parts of Europe in order to be killed there. Some Latvians helped Jews, even under the threat of death, and consequently 400 Jewish people survived because of their acts of compassion, but they were in the minority. 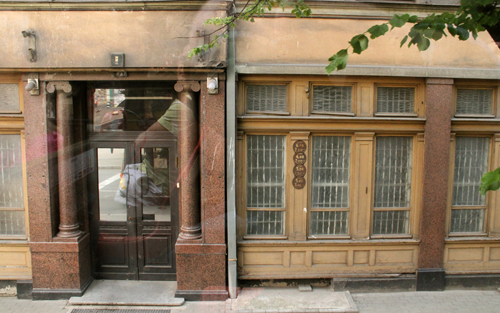 When the war came to an end the British, French and Americans were forced to hand Latvia over to the Russians. In 1946 Winston Churchill declared at Fulton that this “is not the liberated Europe for which we fought.” The iron curtain came down and the degree to which the Latvians were oppressed can’t be underestimated. Even 2 years after the war 28813 people were held in camps as traitors to the USSR . The Latvians put up some resistance, but after overt attacks on Partisan groups failed the establishment infiltrated the partisan groups by threatening to kill partisan group families and in time put the resistance down. From the end of The Second World War to the Fall of the USSR many thousands of Latvians were “moved” out of the country and over 700,000 Russians brought in. Latvian culture, monuments and symbols were replaced by Russian ones. Even now the national language is Russian, and at least 1 out of 3 people are of Russian heritage. 20 years ago the KGB watched for any descent and even now there’s an air of fear in the eyes of passers by. When you read what English people write about Latvians you’ll find countless complaints about them being completely blanked by the locals when requesting help. The tourists see this as arrogance or a lack of care but I would wonder if it’s more likely a fear. 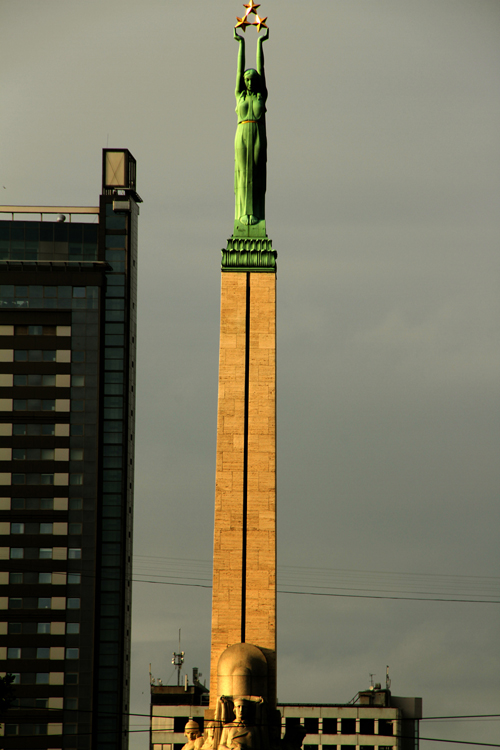 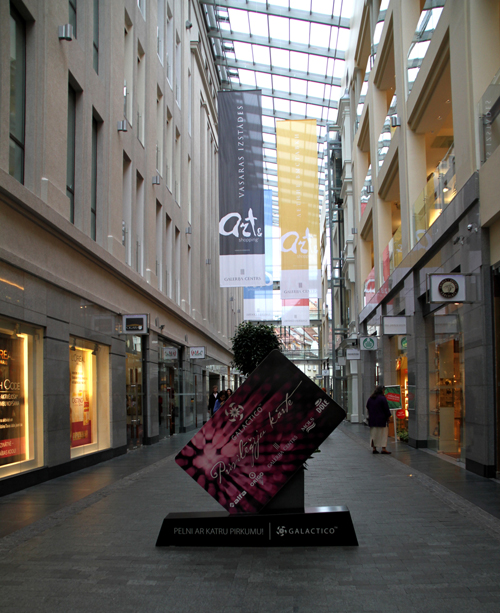 Sue and I walk in to a supermarket which is well stocked with many products we’d find at home, unfortunately for Sue there’s no Marmite – hers was confiscated at the security desk in the airport. They obviously liked it and wanted it for themselves but muttered something about it being highly explosive. – The security guard here gives me a look but leaves us alone. 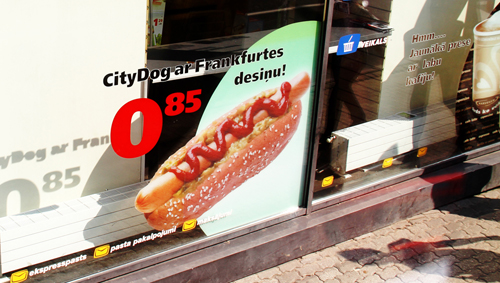 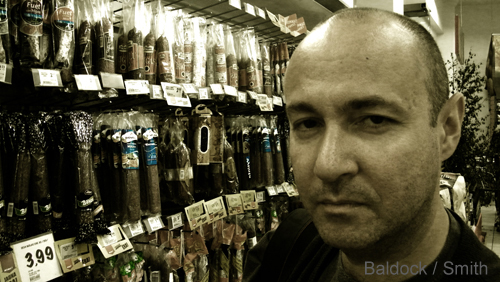 I decide to buy some sausages – ready cooked Kabano types – which on first bite reveal a bit of intestine, I gave the rest to a grateful beggar. 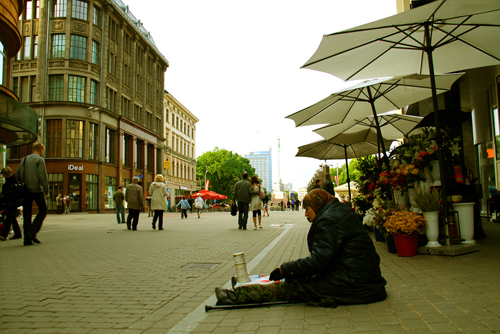 When we got back to the hotel I noticed all the receptionists had blonde hair, earlier they’d all had dyed jet black hair. It seems that there must have been a consignment of hair colourings that must have hit the “blonde and black” markets so wherever we went most women had either white blonde, jet black or deep copper coloured hairstyles.

We said hello to the “pretend to be busy while we check our email” receptionists and they dutifully ignored us, so we went to the bar and had a few cheap drinks before hitting our slightly more equal than others’ sacks.