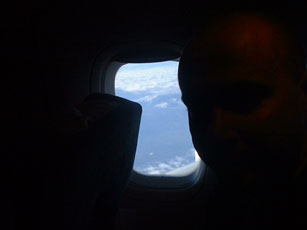 After a seven-hour flight, which had been delayed two hours almost, Lee Batty and I touched down in to JFK airport in New York. In the distance we could see the Manhattan Island, finally after years of wanting to go to America I was actually there. The strange thing was I felt at home. The furthest distance I’d ever been away from London, my hometown, counted for very little. The feeling I had was that of being dropped off in a slightly larger version of London, which was full of English people putting on American accents.

During our movement through the immigration system we had answered yes to one of the questions on the form and were summarily moved into the more intense “immigration department”. We had answered Yes to the question which asked if we had “a physical disorder”, As soon as we entered the room we were ushered to the front of the room at which point nearly all the officials up on the podium mounted desk looked at us and started cursing the immigration official who sent us there. “Are you Brits?” One of them asked. We gave a nod. “Well in future tick no to that question”. “

Can we quote you on that?” I asked

About 5 officials answered, “Yes” in unison.

So immediately we’d felt the paradoxical experience of being an Englishman in New York. It feels like being at home except the world is larger in scale and some subtle rules are different. Like having no lower arms or right foot. hey in the USA that’s not a physical disorder!

Larry Hobson, a friend I’d originally met through the internet and had met up with quite a bit in London, and who cat-sat in my flat when I’d last gone on holiday met us at the entrance lobby of the airport.

Larry took us to his place, where Lee beginning to feel the effects of jet lag, went off to bed. Larry and I toured the City in his new car. The Manhattan skyline is most dramatic at night, it reminded me of an opening scene of Batman.

Welcome to the larger than life comic strip world of New York. Which is not, as Larry will tell you, like TV! 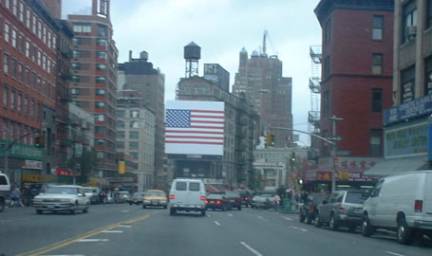 Larry got us a free ride on a river boat tour, the highlight of which was passing the ruins of the Twin Towers. 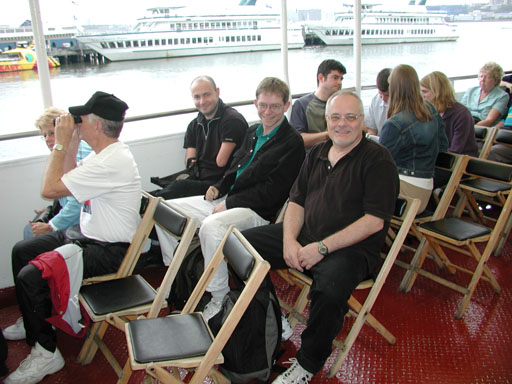 Unashamedly nearly all the passengers moved to one side of the boat to get a better view. I was reminded of the Francis Bacon painting “figures at the base of a crucifixion”. New York and possibly many other parts of America feels under threat right now. From this has risen a camaraderie and patriotism, so everywhere you go there’s flags. From house windows, head scarves and flying from miniature flag poles sticking out of car doors. Along every road are roadside search check points staffed by NYPD officers, US Marshals, and regular soldiers. Having seen such checkpoints elsewhere I could see a difference especially in comparison to Israel. In New York people appeared happy to oblige and in return there were smiles and other friendly gestures between officials and public. In Israel I had sensed the feeling that at any moment a gun battle would take place, so it was best to move slowly and do exactly what was being asked of me, 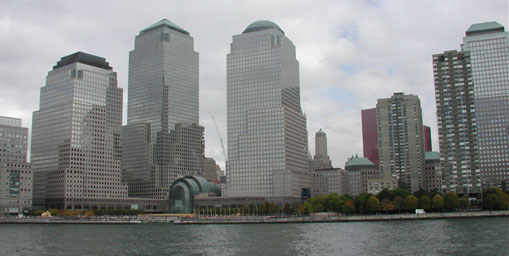 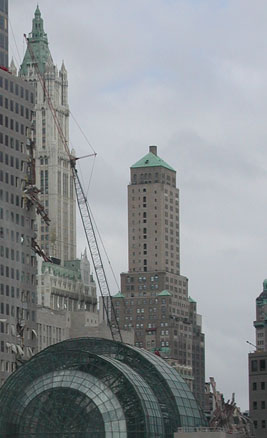 When we first sat on the boat we sat in front of a group of English couples. Meeting compatriots can have a rather grounding effect, I personally prefer the anonymity of class and station that being a foreigner affords. Within several minutes the group moved off uttering those paranoia inducing words “It’s nothing personal”. True to our English upbringing Lee and I stuck it out on deck shivering while Larry contradicted most of the fascinating facts the tour guide extolled and gave us a running commentary of the places he’d lived and routes he’d cycled. Still this probably beats my version of “places where and people I’ve snogged in and around London,” a tour my present partner assures me is extremely boring and annoying!. At the end of the boat trip an army patrol boat circled us, on board were mounted several large machine guns…….. that was the second most interesting moment. 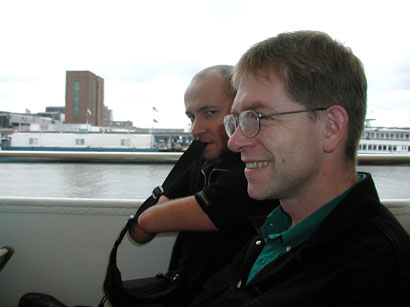