I am lying in bed, there’s a slight pain behind my right eye, and my nose occasionally runs like a tap. My girlfriend, Sue, shows me her iphone which has a video image of the room with lots of red balls bouncing around, apparently these represent pollen activity and there are a lot of them.

Looking once more at her iphone she becomes my own personal newsreader and weather girl “The temperature in Riga is 14 today, 13 tomorrow and it’s likely to be raining”

“Thank God” I think, but say instead “Oh well we’re not going there for the sun”

We’re going for two main reasons, the first being my father, who died recently, was born there and I’m interested in my family’s history and the second is more practical, a cousin of mine, who’s travelling around Russia is going to be in Latvia for a week, so I said I’d meet up with him.

Latvia isn’t really a country one would normally think of going to for a holiday, and with the GB pound now weak against the Euro most places in Europe aren’t exactly teeming with British holiday makers.

I’ve looked on the Net and read that Latvia has a reputation for being a good place to have stag parties, to try out shooting AK-47s and satiate sex tourists, but my trip aims to be a quieter affair.

I’ll only be stopping for 4 and a bit days, and in that time I aim to visit Rezekne , which is where my father was born and stayed until he was 12 when he emigrated to South Africa. His life in Latvia (1926-1938) was a world of mud floors, horse-drawn carts and poverty. As the War approached, the Jews, of which my father was one, sensed it might be a good idea to leave Europe if possible. My father’s sister stayed and was killed, my father’s good friend’s sister stayed because she won the lottery and “disappeared”, and my cousin’s mother insisted on staying until her husband literally threw her on to the last train leaving for Moscow, they ended up in Siberia but survived to eventually bring up two children. Yasha was one of them, he died just over a year ago and was renowned as an expert on helmet technology for fighter jet pilots, and their other son, Eddie, became a well known sculptor and artist. Yasha’s children in turn went on to become amongst other things a TV producer, and an international press photographer. Eddie also has a son who, though young, seems to have a bright future ahead of him. These are part of the consequences of survival.

I was once sitting in a café in London listening to some Eastern Europeans being very anti-Semitic, and I had heard from my father that the Latvians had hated the Jews, and were quite happy for the Nazis to come in with their Final Solution, so for him the idea of returning to Latvia had been difficult..

Although I was brought up as a Christian, and have less knowledge of Jewish culture and customs than most people, I obviously have an interest in the Jewish situation and am sensitive to anti-Semitism. I too had been brought up to despise Jews and whilst that pressure in our society subsided I have noted over the last few years that while certain sections of British society target Muslims for their race hate, others target Jews. Currently with the situation in Israel on one hand and on the other the conspiracy theorists believing the Jews are behind most of the horrors of the world one can see a mounting resurgence of anti-Jewish sentiment..

My personal take on these issues is that generally speaking we don’t get to see the truth on most matters, so our points of view are often manipulated. I believe all peoples of the world behave with creative and destructive motivations and are in turn manipulated by all sorts of “forces”. So when I write it’s partly motivated by a desire to remind everyone about everyone being human.

So even if the weather in Latvia is going to be hay-fever friendly and dull I don’t suppose my stay there will be. We shall see.

At issue? Bless you!

The Journey and Arrival 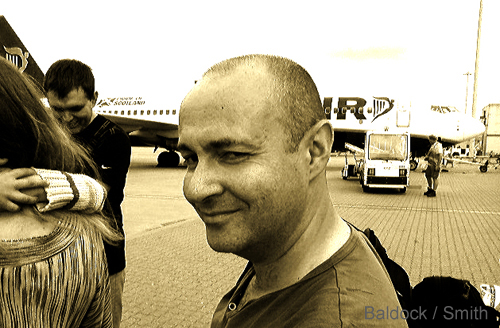 There’s something about travelling by Ryan Air, it’s a whole different experience. It’s not that it’s modular, as in you can buy in or out of parts of the service, or that you have to rush to get a seat, that’s fine – gets you in the mood for foreign queuing etiquette – it’s more about the social dynamics that come with this. The staff herd the clientele who in turn show little or no regard to them, the issue of respect resides on a thin line. As we touched down the passengers applauded, I’m not sure if it was to the pilot or God.

We’d paid extra to have a driver pick us up with one of those signs with our names on. It’s worth it just for the kudos plus he gave us a guided tour, which included stopping the stream of traffic behind us as we went over a bridge in case we wanted to take a photo of the sunset. We declined.

As we drove in to Riga I noticed three worlds, one was the original Latvian style architecture, then there was the Soviet era style, mainly grey soulless blocks and finally the “globalisation” look that you’d find in any modern city throughout the world – glassy shopping centres and large curvy hypodermic shaped towers on the river bank. 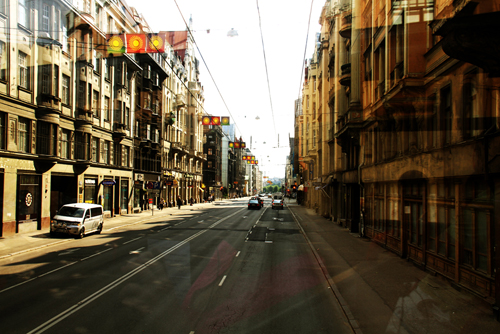 “It’s safe here, just be careful of gypsies” our driver warned “especially in the market, it’s the biggest in-door market in Europe ” – he sounded slightly American when he said that.

I had imagined the Old Riga Palace Hotel had originally been a palace once, and was looking forward to staying in an ex stately home however the reality was different, but top marks for branding. In most modern hotels, you enter the room, pass the bathroom and in front of you is a room with a bed, a desk and a comfy chair. The room we got had the latter bit but it was as if the room had been cut in half and the furniture pushed closer together.

Sue, who’d had her Marmite confiscated whilst going through customs, muttered that it was probably the worst day of her life, especially when she discovered that there were no “normal” tea bags or milk cartons and went on Facebook to share her feelings.

Eddie, my cousin and his wife Miri came to our room and invited us out for a drink. As we walked the streets we started to see how beautiful the architecture was. It had the feel of any Northern European city and so even 1000 miles away I didn’t feel too far from home.

I should sleep now but I ate too much, I ordered two starters but portions here are large. Tomorrow I’ll be more careful.