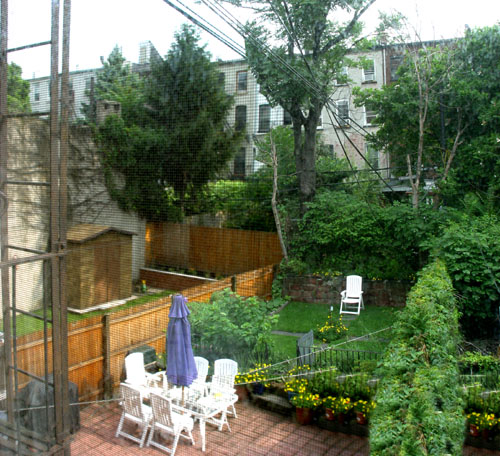 I looked out of the window to the back garden and thought how much like a suburban English scene it looked. There was grass, a shed, a patio, a tree lined back fence and a grey cloudy sky. But walking out of the front door on our way to a cafe for breakfast the similarity came to an end. Firstly the air felt like warm water brushing against my skin, then the sounds of men playing basketball in the playgrounds in front of the “project” (Council Estate) across the road were New York voices. The buildings along this side of the road though are distinctly Brooklyn, with their red brick facades, and stair ways up to the front door, known as Stoops, a word surviving from the Dutch when New York was New Amsterdam. The word Brooklyn itself comes from the Dutch word Breukelen (a town in Holland), and there are many other places which sound like they are named by the English but are not. American’s go on about not having much sense of their own history, but even the history they do have is possibly ignored because of the conundrums that looking at history would bring about. The dominant cultures here probably prefer to have their version of history kept in the lime light, while the dominated cultures make do with anglicized versions of their words and culture. This isn’t to say that cultures are actually dominated here, New York as most of the world knows is a city of culturally identifiable neighbourhoods. There is something symbolic about New York and its surrounding areas being built on Islands away from the mainland. 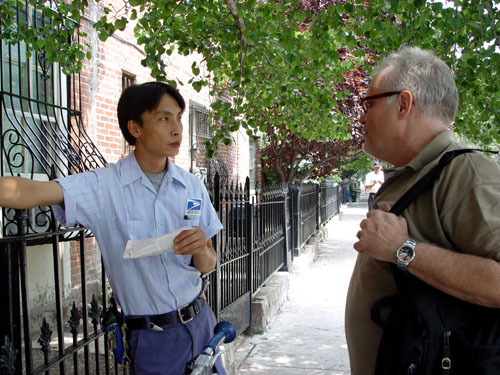 Larry says goodbye to the postman

Last time I was here I remember a tour guide saying how Manhattan was originally a hilly area, over time it was flattened and upon it a grid patterned road network was laid out. However one road was left following it’s originally route and this was an old Native American trail, cutting diagonally through the grid system like a mark of remembrance, a call for freedom from the constraints of our world, this road is Broadway. Not particularly a road known for it’s anarchistic leanings.

This is what New York feels like to me, an Island filled with multi-directional forces sitting noisily, pushing up, pulling down, silently suffering, persistently provoking, trying to be cool but in the heat and pressure getting hot and angry, New York feels hot and grumbly today. 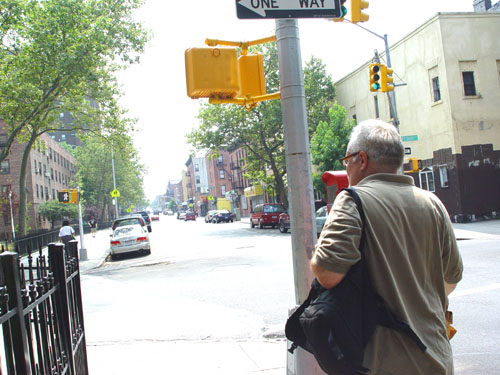 Does it look hot? No! Well it was.

Larry and I walk a couple of blocks to the cafe, we take it slowly as any exertion could lead to total meltdown. The crossover between London and New York is sometimes known by the trendy as “NYLON” – As in New York London-. Larry’s bought me to this cafe because it reminds him of cafes in London. Colours are kept to terra-cotta, green, yellow and natural stone. Food is served to match or compliment the interior design, lots of green salad, and most main courses are coloured neutral with a touch of green and red, even deserts verge on colour coordinated healthiness. The beverages menu competes with the big coffee house chains so much so that I am shocked by how many questions I have to answer when ordering a white coffee, “will that be regular or decaf, is that Soya, full fat or skimmed, will that be low fat or no fat skimmed?”. I try to catch her out and ask for Chai, she says “will that be Chai tea or Chai latte?” 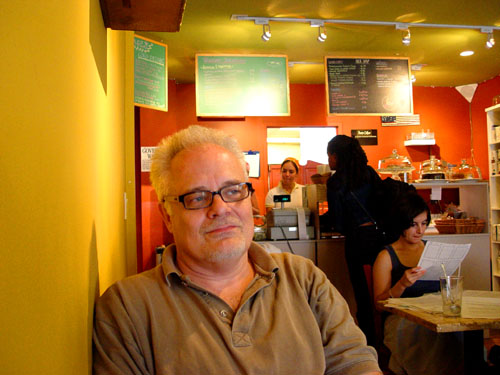 Larry ponders what milk to order with his coffee 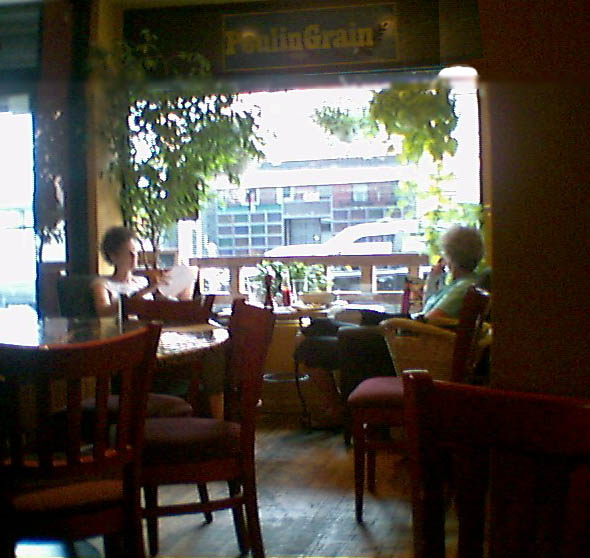 The clientele in this place are mainly young people, students pouring over books, middle class middle aged chatters, mothers negotiating their way in or out with buggies and normal people like me. Larry is right, this could be a cafe where I live in London, there’s even the obligatory comfy arm chairs and newspapers. These are the new bars, non alcoholic meeting places. Recession or not people are opting for go slow healthy food. McDonald’s has reported its first loss ever this quarter, what the hell is the world coming to when people start choosing to relax and eat more carefully? Perhaps like the grid we can all only take so much of the griddle.

I said to Larry, “You know vegetarians who eat fish too are called vege-quarians, and those that eat chicken are vege-chicki-quarians”, Larry laughs in to his Regular Coffee. He looks at me and says “Yeah and those that aren’t sure are they Vague-uns?”. I giggle in to my Chai Latte.

As with all things, both good or bad, they must come to an end and so it was back through the heat and anger we waded, on the way an old woman sees me taking photos and shouts “You aren’t taking photos of me are ya?” Larry retorts “Why, are the police after you?” After a moments silence Larry tells me there’s a lot of Irish illegal aliens in Brooklyn, he walks on victoriously.

From this point the day goes down hill. Larry’s car that has been reliable since he got it 8 months ago starts to have problems starting up, earlier on in the day he’d taken it back to a place where they tinted the windows to have some tiny air bubbles removed. This eventually ended up with them taking a door panel off and Larry is now convinced they’ve short circuited the electrical system. 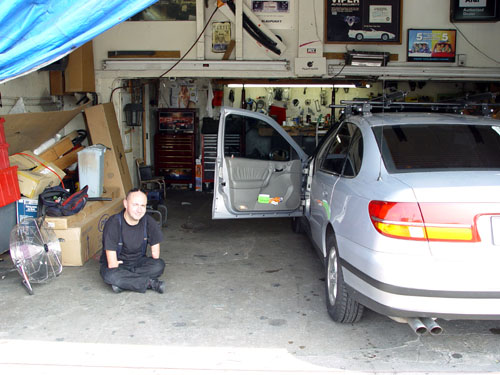 The first emergency mechanic turns up, he’s the guy with 9 11 tattooed on his fingers, Jose, and while getting the car going he tells us how he helped through the night of September 11. 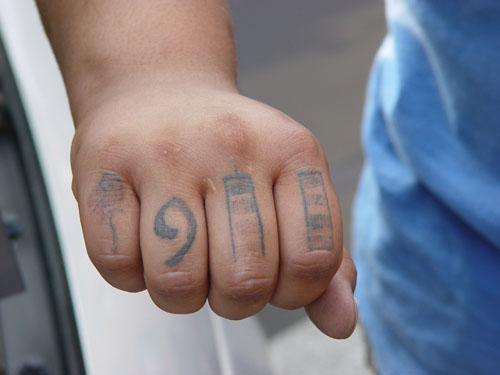 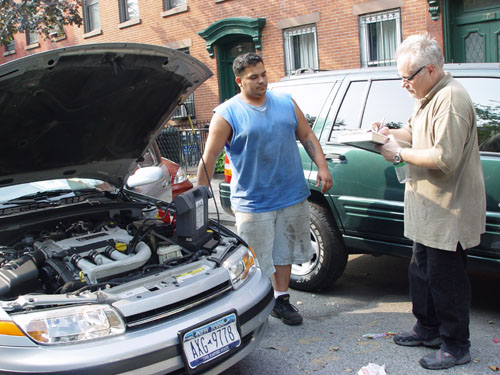 Almost two years on and the attacks that took place that day permeate the whole city still. 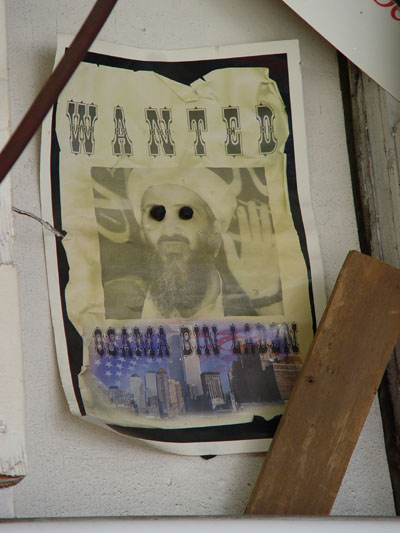 I remember thinking while watching the incidents of that day on TV in the UK that they would reverberate for a long time throughout the world, but here the reverberation is different from outside the US, here it feels like there’s a sadness and anger shrouded in reverence. 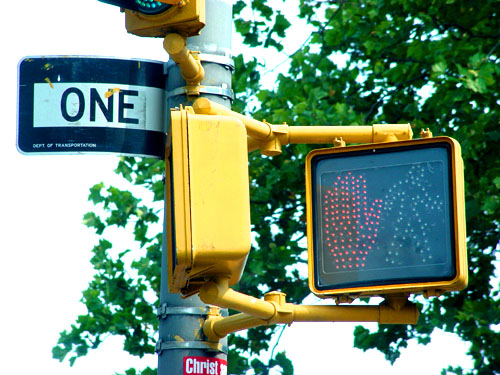 Even though Larry tries to get his car charged up it doesn’t and the emergency vehicle recovery service are called out again. This guy takes Larry on an emotional rollercoaster by the end of which he doesn’t know what’s going on. Can we risk using the car, will it need to go in for extensive surgery, is the alternator broken, is the battery dead, will using it cause the battery or alternator to be damaged? 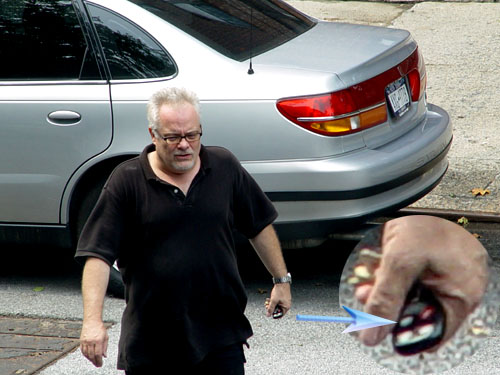 Larry is tempted to push the “I don’t fucking believe it button!”

I suggest to Larry he buy a starter power pack, this consists of a sealed battery, a charging device and jumper cables. Once charged up you can use it to power a car’s ignition system. I have one in London and have become quite popular with my neighbours who now call me instead of the AA to get their cars going, I’ll do anything to get attention!

Yes anything …… ok almost anything”

So Larry bought one and then the car decided to behave itself. As Larry said “If you want to solve a problem just spend money on something you’ll never use and watch the problem solve itself”

Such is fucking life!