My mind loves to look for connections, especially in hindsight. So when my friend Cormac called me a week ago and told me he’d just been to Vienna I should have remembered then that one of my big connections with Cormac is him rushing me to hospital in his car, one morning a year and a half ago. At the time I thought I was just about to die. In fact I had kidney stones a condition that probably didn’t really warrant driving on the wrong side of the road and jumping red lights in order to get me to hospital quickly.

So for me if Cormac was a tarot card he would mean:

I didn’t realise that a phone call from Cormac was life dealing me a Tarot card which had Cormac’s smiling face on it. I should have prepared myself accordingly.

20 minutes after booking my tickets to Vienna on line I started to feel ill and from then on tumbled down a night of fevered shaking and nausea into a day of lethargy. My partner helped me to the doctor who gave me a course of antibiotics and told me that a man of my age should not be getting this kind of illness and sent me off to hospital for tests. The results showed nothing conclusive and the hospital doctor said that if it continued to go back to my own doctor.

Of course it doesn’t stop there, due to being ill I hadn’t checked my e-mail so I did not see that my booking had been canceled due to the wrong credit card expiry date being input. Part of me felt like giving up on the idea of going to Vienna, but I don’t like feeling like I’m a victim, even of fate, so although I felt exhausted from the medication I got the tickets, packed lighter than I’ve ever done before and at 5 the following morning set off.

In order to get a fair cheap enough to meet my budget I had to firstly take a flight to Paris and then take an Austrian Airlines plane to Vienna. Any direct flights were almost three times more expensive, especially from British Airways who continually bemoan the effect of September 11th on their bookings, but do not cut prices to bring in more custom meanwhile the low cost carriers are expanding. “Unfair fares” will be written across the placards held by angry BA share holders in the near future. I HOPE!

When I get to Vienna I shall be staying with a friend of mine who after a 9 year gap of not seeing each other, contacted me after finding me on the Internet a few months ago. Her name’s Francesca and she works for the UN. Before setting off for the airport I had checked my tickets, the accompanying schedule said that I would be traveling business class, it crossed my mind that maybe Francesca had used special UN powers to get me an upgrade, alas it was not so, the staff at the check in told me it was a mistake and economy was my destiny after all.

Feeling delicate from my illness, carrying all my luggage as hand luggage and knowing that plenty of walking was in store when I got to Paris helped me decide to ask for help. Normally this means getting a ride on a buggy between check in and the gate, however today it was sit in a wheelchair or hack it. I decided to take the ride.

Many people, and often I would include my self amongst them, prefer to suffer physical pain rather than feel stigmatized. The reality of being in a wheelchair is of course somewhat different. And the experience I am just about to write about, I must make clear, is not the experience of a wheelchair user, just a wheelchair borrower.

Firstly the benefits of getting a lift via a wheelchair are that you don’t ache from the journey, you get to meet interesting people as they push you, you either get to the plane well within time, or if you don’t you can blame the airline, as you swish along you get a duel feeling, one is of being special, the other is of being pitied, but then you don’t have to queue for security or passport control and if like me you ask your pusher lots of questions you get to find out things you wouldn’t normally. The negative aspects are you get looked at, people make assumptions about you that are probably not at all accurate, and possibly worst of all is waiting for the pusher to come to get you because you don’t know if they will ever turn up. It was like being on the set of “Waiting for Godot”.

This time around I had to say to my self “listen who cares what these people think about you, does it matter?” Unfortunately as illogical as it may seem I can’t help but care. On reflection the whole experience was one I was very glad of, not just because of the comfort and convenience, but also because of several incidents that occurred because of this. The first was being shown an architectural feature of Charles De Gaule Airport which has to be one of the finest airports I’ve seen internally, and the second was observing that as soon as I sat in the chair I felt an almost overwhelming urge to start saying humorous things to the pusher and passers by. I did actually manage to resist but even so it was an interesting phenomena which I doubt is just reserved for me. Our sense of self worth is so tied up with what our peers think that it is extremely hard to resist this pressure to keep them happy even when it’s totally unnecessary. I’d like to be a bit more ZEN about this matter but for now I am sadly human.

One of the great paradoxes that traveling throws up is that people who live in very different worlds, have similar basic needs but live such different ways of life in order to fulfill those needs. I always like having widow seats on planes so that I can look upon on the cities and towns we fly over. I’m always struck by how I can often see cars but not people. 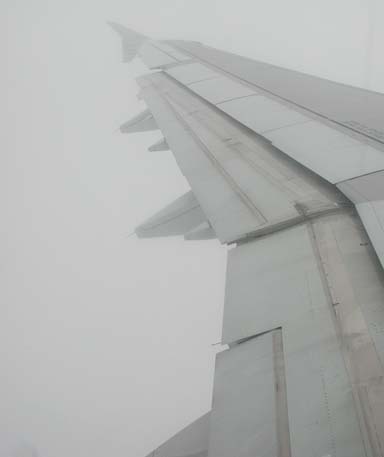 From Paris to Vienna I managed to get a window seat but hardly looked out of it because of chatting to the woman next to me. No I wasn’t chatting her up!!! Her name was Christina and she had just traveled from Canada to see her Grandmother in Vienna. It transpired that Christina had been adopted and her biological mother had lived in the UK. I told her about the reunion with my father, and how ultimately it’s a gamble searching out lost parents but one I think is worth it even if they reject you. She said she was mainly interested for medical reasons, but her husband was against it because he felt the truth might be too traumatic. Having been through the experience I felt that my life before I met my father was a quite different one to afterwards. And having met him meant I could see where some of who I am had come from. Christina and I chatted until touch down and then she went off. At that point I realised that I have had many of these short ntense traveling conversations in my life, and how these brief encounters with other people’s minds can have a profound effect on you, even though you will never see that person again. 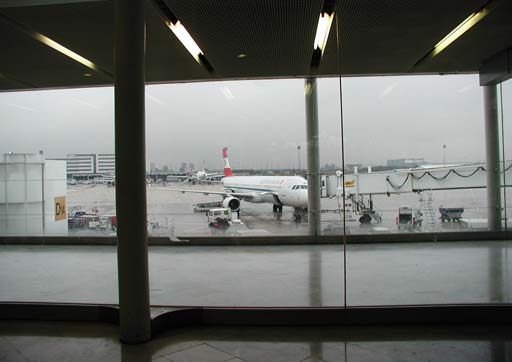 As I got pushed in a wheelchair from the plane to the exit by a young man who had just come out of the army and was waiting to get a job as a fireman, (It’s amazing what you can glean from a 5 minute conversation too) I learned how to say ‘excuse me’ in German so that I could repeat it to people as we slid along the corridor. I told the pusher that I was on my way to the UN and needed to be taken to a taxi who could take me there. He seemed suitably impressed and passed on this information down his walkie talkie as we passed people, who overhearing his transmssion in turn stopped to look around at the VIP UN delegate. As we hurriedly and purposefully moved onwards in our very important journey to the UN several security men joined us and walked along looking around as security men do while whispering into their walkie talkies. (OK they could have been saying “now lets get this nut case off the premises as quietly as possible”, but I like to think otherwise if you don’t mind)

The journey came to an end where people wait to meet friend’s family and taxi drivers. I felt a bit exposed at this point and was relieved when Francesca stepped out of the crowd. Francesca had actually asked me to make my way to the UN building by taxi from the airport but with her there I stood up out of my wheelchair, took my bags from and thanked the pusher and walked away, behind us were murmurings of a miracle just occurring.

Francesca lives in the heart of Vienna so she took me back to her place where I slept for the afternoon while she went back to work. When she came back it was with a friend of hers who lived in Belfast. I asked her friend, Michelle, if she had ever seen Cormac on the John Daley show, and she said she thought she had. He used to do a spot of talking at the start of the show. See those connections they’re everywhere! Cormac had come to Vienna because he’s a classically trained musician and Vienna is a Mecca for classical musicians, but my reason for coming was more about opportunity than anything else. Francesca had said I could visit her so I took her up on it. 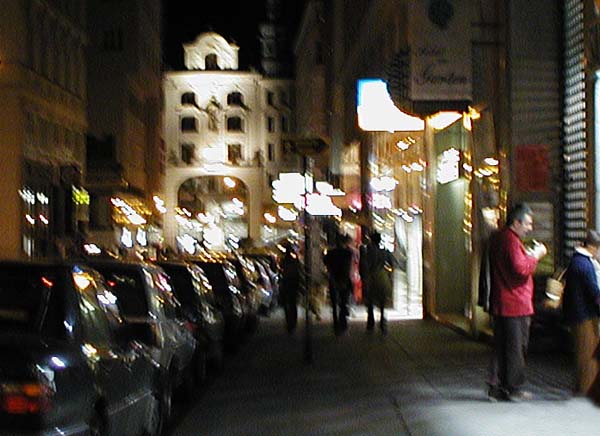 But this evening as I sat in a restaurant and ate a real Viennese Schnitzel, then sat outside a café eating ice cream, and walked the cobble stone streets near Francesca’s. I could see that Vienna is one of those cities that has a magical side to it. 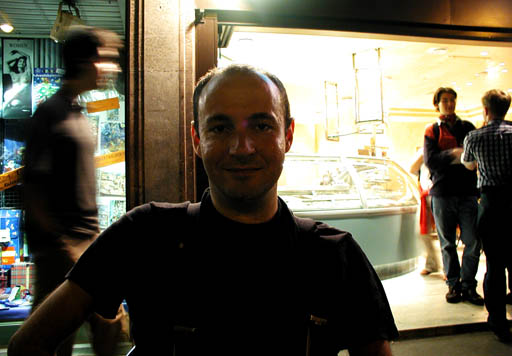 Just one wafer thin mint then!

A bit later on as we walked down an old street a young man shouted something in German and immediately I thought I was in a WW2 film. OOPS I forgot, don’t mention zee vor!