Last night I got so tired that I was falling asleep as I wrote the Diary. Eventually I gave in, put the sofa cushions on the floor and lay on them to sleep. The original plan had been that I share a bed with the only other male member of the group, sleeping head to toe, this would resolve the problem of their only being 3 beds for four people. (I did offer the more equal opportunities based policy of one of the women sharing every other day but…….. ) Anyway the double bed here is small, there’s only one cover, I tend to spread out when I sleep, and Colin wears red tartan pyjamas. Enough said!

I had dropped off to sleep only to be woken shortly after by my car alarm going off. I looked out the window but could see no one near the car. This happened several times so eventually I got dressed and went to have a proper look. As I went out the icy wind and rain hit me, within seconds my temples started to hurt from the cold. (Whose bloody idea was it to write a diary from a cold wet country anyway) I checked the car, and put the alarm going off to the wind shaking the car. I tried just manually locking the car but the alarm kicked back in automatically. Next time I get a car I shall read the manual. I went back in and after a while the alarm sounded again. This time I switched it off with the remote key from the window, I felt a bit like James Bond at this point. Looe is situated on and around a cove, and we’re positioned on one of the arms of the cove. I imagined that my alarm could be heard by most of Looe’s inhabitants. Oops!

I awoke to Nikki wishing me a Happy Birthday, I’d forgotten it was today. My three co-travellers had got a card for me, however the sense of being away from home, family and friends on my birthday hung over me for the day.

I suppose that starting off our journey in a garden of Eden was quite appropriate. We visited the Eden Project, which is a large tropical type garden kept inside a few very large ball shaped greenhouses. I’m not going to describe it any further as you’re probably reading this on the net so if you want to know more you can do a search, as you can see I found it deeply inspiring! My partner, who had once been a gardener, came into my mind as I walked around the place. I was thinking how she’d probably find it very interesting, but for me I was left feeling a bit cold about it, even if I was covered in a tropical rainforest induced sweat. So after a quick once over it was off for a quick drink in the café with Colin. 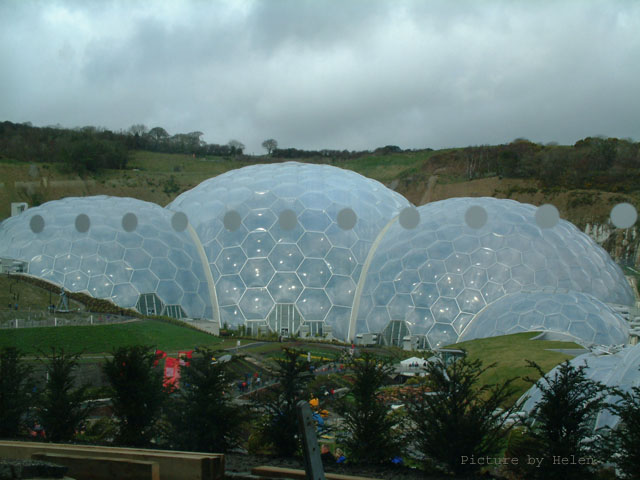 When we returned to my car a bit later I found the battery to be completely dead, so the engine wouldn’t start even some of the doors couldn’t be opened. Hunger ruled though so we climbed in through the ones that did open and snacked on our sandwiches for a few minutes during which we eyed up people walking past us commenting on whether they might be useful in helping jump start the vehicle. Eventually a man trundled past who I thought looked a bit ex-army so I asked him if he’d help. As it turned out his car was next to ours, and when I said “it’s ok if you’re too busy” he said no “I’m not too busy to help, one day I may need you to do the same for me”. Within a few minutes the engine fired up and we were on our way back to Looe. 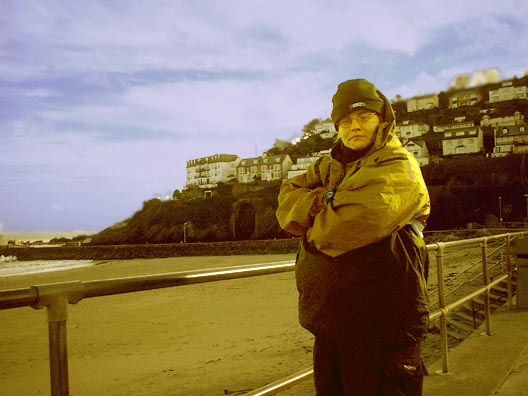 The main purpose of today, or at least for me and Helen was to search out a place in Looe where we could connect to the internet. After a bit of a goose chase around the town I found a local computer school who hired out a connection to the net so at least from today until Friday I shall be able to post the Diary daily. As I went around the town asking people if there was a publicly available net connection in the town the general expression on their face was an incredulous smile. “The whole point of coming here is to get away from all that,” one said. I won’t say what I thought.

Tonight Helen cooked us a Thai red curry, Nikki let me beat her at Draughts, Helen (my latest convert) addictively played Unreal Tournament, and at one point she even tried to get Nikki into it. I said to Helen, “You haven’t yet learned who are the types who are likely to enjoy Unreal Tournament” and sure enough a few minutes later Nikki was saying how she’d prefer to be swimming with virtual dolphins. I looked at her in pity, Helen just shook her head in disbelief and proceeded to blow off her virtual opponent’s one. A familiar mad chuckle came from her as she said “God this game is evil!”

Another notch got added to the tally for my entrance to cyber heaven!