A religious couple are standing by a roadside in Texas when a Porsche speeds past them at over 120 mph. A few seconds later a truck goes by too. A man is leaning out of the truck window firing a gun at the Porsche. The couple have come to America from South Africa in the search for somewhere to bring their family to live. America’s early settlers consisted of a split between religious pioneers in search of the promised land and people who were either running from something or had been evicted as being too criminal to live elsewhere. This dichotomy still exists in the USA today, at times it’s dramatically pronounced but generally it’s an undercurrent that you can pick up if you take a moment to look. When the President says “God bless America” there’s an element of being the chosen ones inherent in it that allows America to feel at ease with it’s violent treatment of it’s foes. God and the gun sit in the scales of the American conscience. 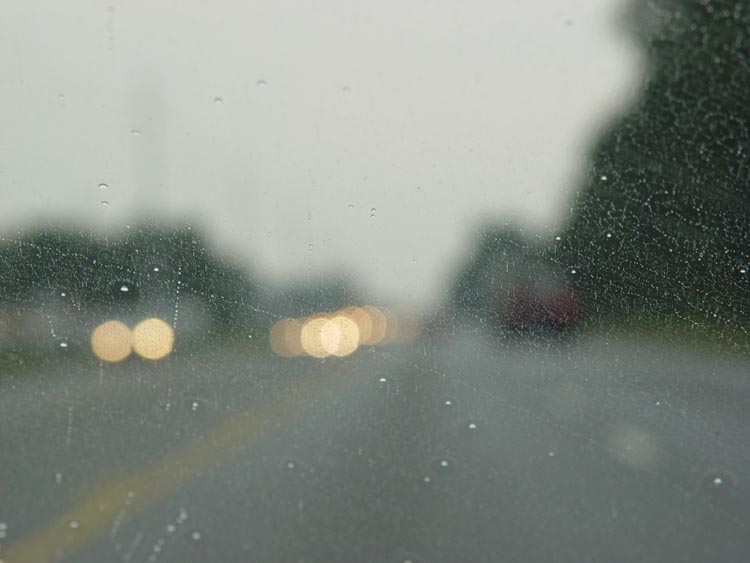 People around the world often talk about Americans as a homogenous group but if there’s one thing I noticed as I travel around the States it’s just how fragmented a society it is. While America wraps itself in the Stars and Stripes in an attempt to ward off Terrorist yearnings to destroy the USA, in reality the divisions between class, economic strata, religions, race and cultural groups is still bubbling as it ever was. The notion of a common enemy has perhaps created a sense of patriotism and unification between all these groups but the problems have not gone away. As I have travelled and spoken to different people it’s been easy to see that while there’s some people who react to the political situation in a stereotypical way there’s also been many others who have had very different thoughts on these issues. If Americans have an insular view of the rest of the world then perhaps it’s just as true to say that the rest of the world has just as two dimensional view of Americans too.

The air is warm and wet, my camera lens keeps misting up. Amalia’s making breakfast, apologising because she’s not used to acting as a host. I tell her not to worry, I don’t expect special treatment, I’m glad to be here with her. For me I feel privileged to be with Amalia, because I am the first blood relative that she has met as an adult. My sister is Amalia’s birth mother, but due to my sister having severe mental problems and neglecting Amalia when she was a young child, Amalia was adopted by a family. When Amalia was 12 her family moved from South Africa to live in the States.

When I first met my father he told me about my sister, so while I was pleased to have another sibling my joy was tempered by her being in a psychiatric hospital in South Africa. I have spoken to her on the phone, although not for a while, but so far we have never met. Perhaps one of my next big trips will be to South Africa. My mother had been open about my father when I was a child, I knew he was from South Africa, and that region of the world has always had a special significance for me. When I was about 6 I saw some acrobats on TV who could fit into very small boxes, because they were from South Africa I too learned how to fit into very small spaces.

One day I was sitting on a train with my mum. There was a black man in front of me so I asked him if he was my dad. My mum said sharply “of course not!”. He looked at my mum trying to remember her for a moment. I don’t remember much after that ….. maybe I was unconscious. 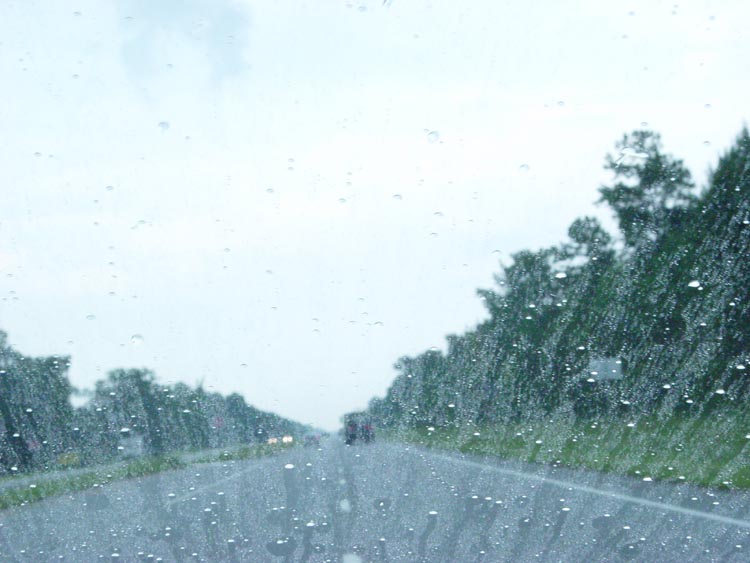 I first spoke to Amalia on the phone about 5 years ago and had stayed in contact on and off during that period. Just before coming to the States this time Amalia had emailed me which was good timing because we hadn’t been in contact for a couple of years and I no longer had her present contact details. So call it a coincidence if you want but for me coming to see Amalia was the one of the main reasons for me doing this trip. Having been through the reunion with my father I know that the actual initial meeting can be less powerful than people seem to expect, and that what follows is important. It’s the relationship that ensues afterwards that helps to heal each of us that has been parted from one another by fate. So for me I wanted this to be a gentle and relaxed introduction, I hadn’t come to offer Amalia judgments on what she’d turned out like, and that’s how it went. Amalia cooked breakfast, and when Jim came in from the gym we ate together and talked. 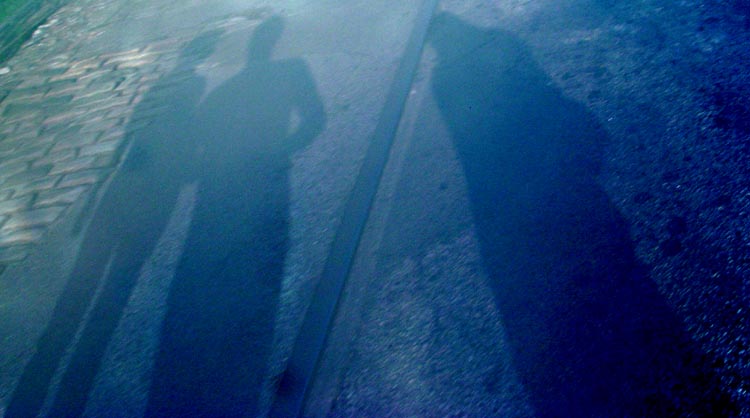 Amalia, Jim and me. 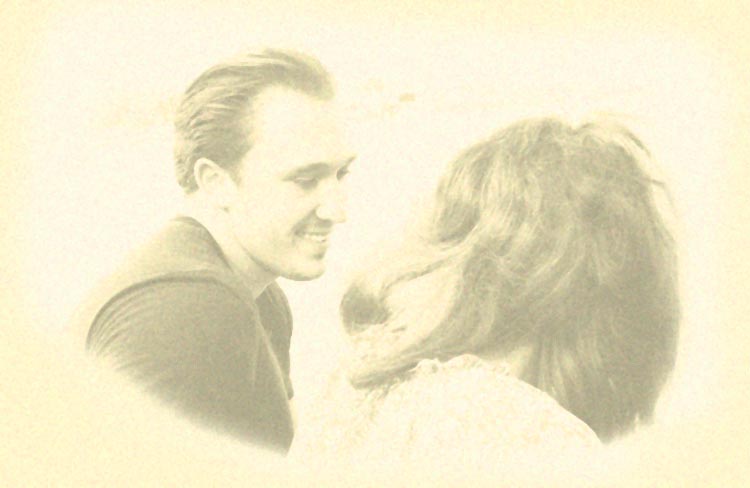 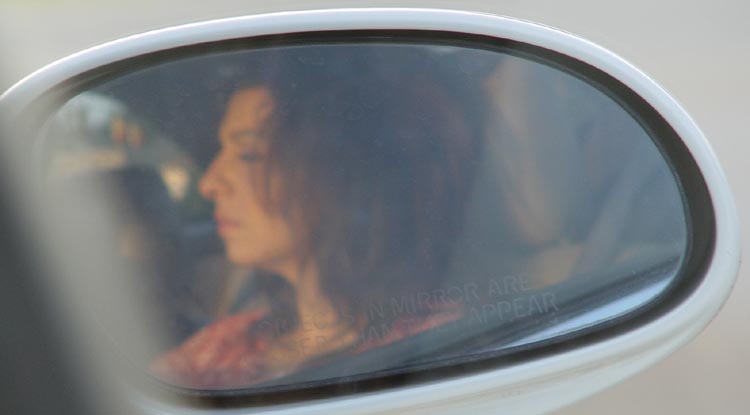 “Objects in the mirror are closer than they appear” 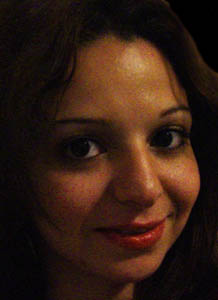 Amalia (she has similar eyes
and cheeks to me, my father,
and my kids) 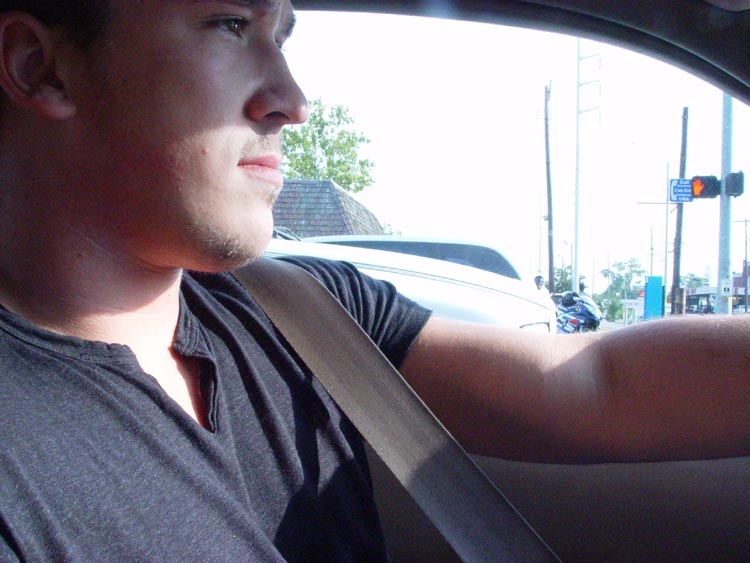 Jim, Amalia’s boyfriend. He likes Elvis and drives without swerving so he gets a picture just for himself.

This afternoon we drove to Savannah which is one of America’s more historic cities. If The South is renowned for wearing The Bible Belt then possibly it’s just as well known for the racial divide that exists here. As we drove around the tension between whites and blacks was almost tangible. There were people of both colours mixing together but generally there seemed to be a leaning towards ghettoisation. In the UK this happens a lot too, but being in an area that has a history of extreme racial plight makes it the more noticeable. One white person was quick to tell me that the young black males had got in to wearing white T-shirts to make it harder for people to identify them if a crime had been committed. I’m not sure if it was true the ease with which to pigeon hole another sector of one’s society does not bode well for either party. 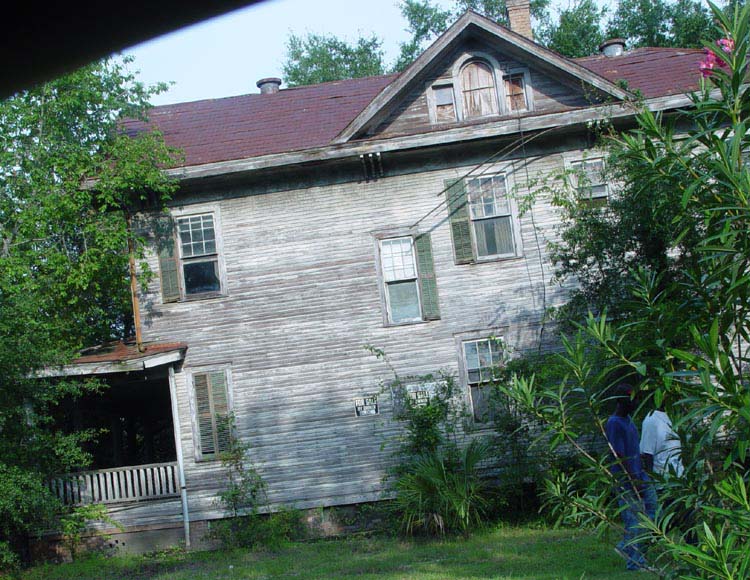 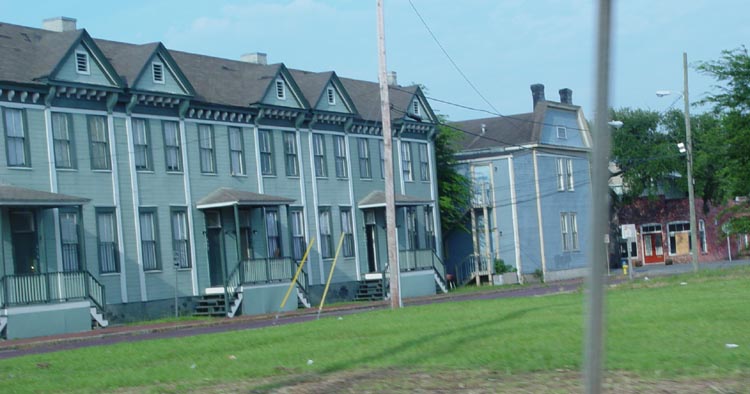 Savannah seemed to have clearly defined well to do and rough areas, some were literally divided by railway tracks. However there also seemed to be areas that were gentrifying, especially near to the river side. Throughout the world as our societies become less and less manufacturing based, our old city docks seem to be first on the developers list. As with wishing wells people love throwing their money in to water. 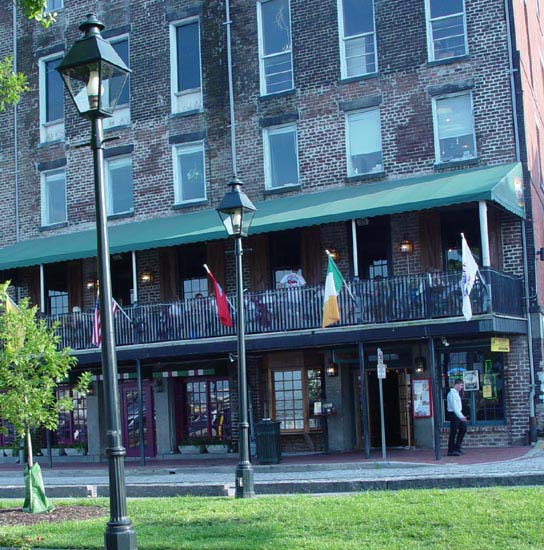 Ok enough of all that kitsch stuff back to the poor areas, they’re easier to get interesting photos of. 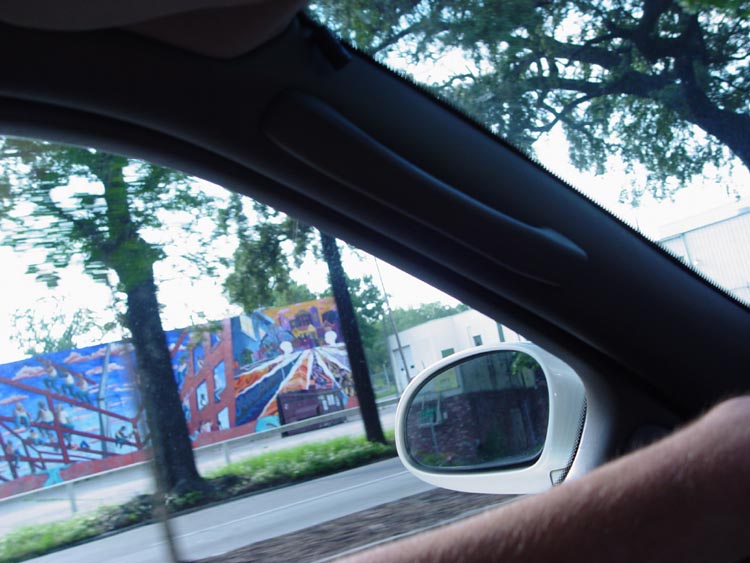 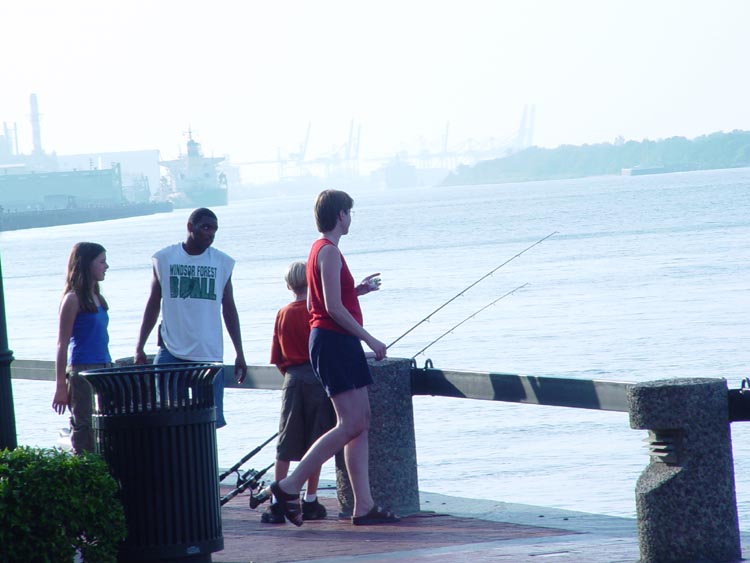 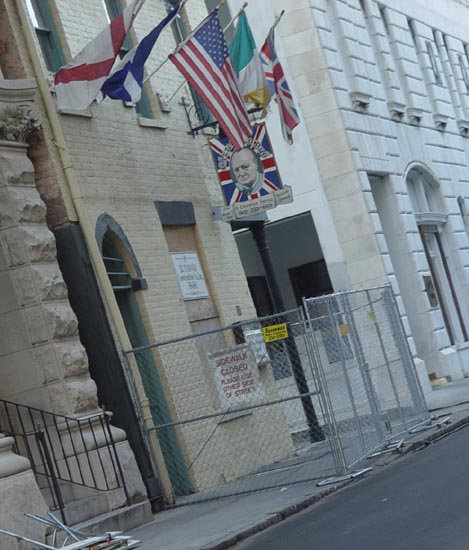 In a city that seemed so racially divided here’s a pub that if it was in the UK would probably be burnt down. Erm ….. Apparently it was, hence the renovation work. The Union Jack, the English Red Cross flag and pictures of Winston Churchill are emblems that have been taken over by the far right and neo nazis in the UK. 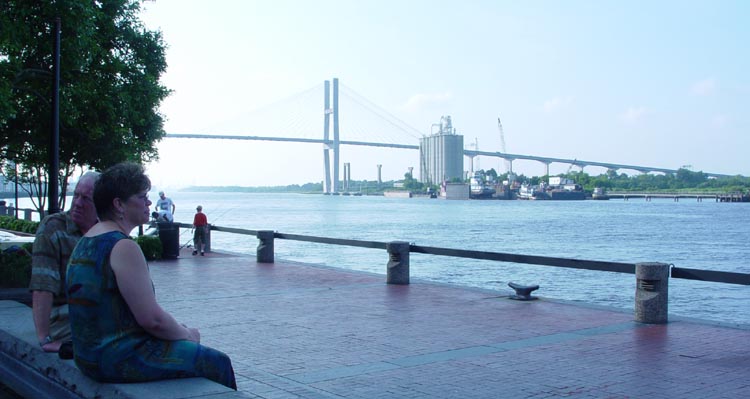 Jim insisted I show you how long and big the bridge is, well he is American! 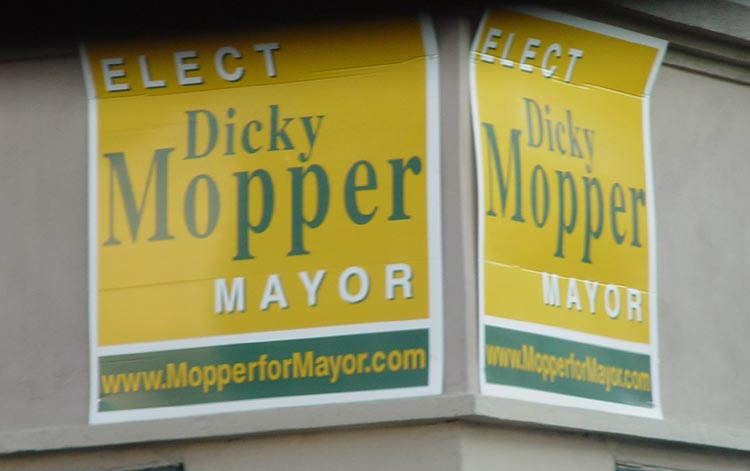 Not the best of names for a Mayor, lucky they spelt “elect” correctly. 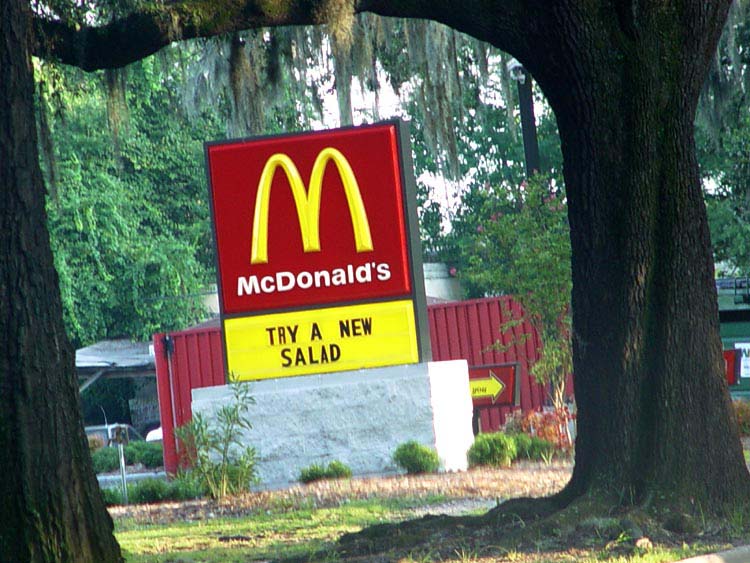 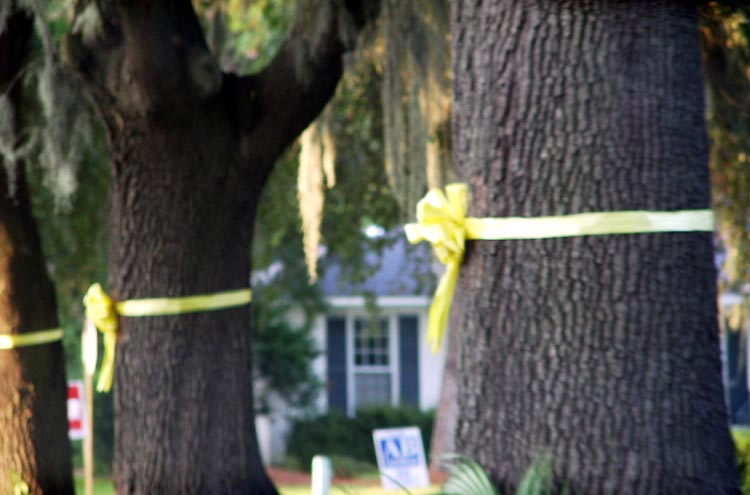 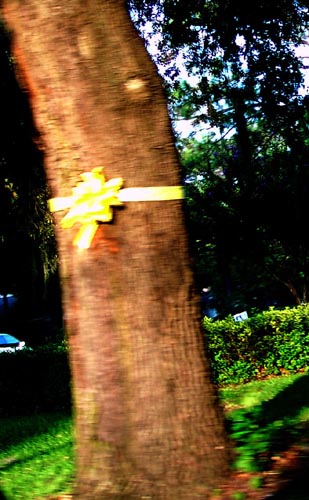 Now the whole damn bus is cheering
And I can’t believe I see
A hundred yellow ribbons
‘Round the old, the old oak tree

Sometimes just one will do