Firstly this didn’t get posted until day 8 sorry, unfortunately we didn’t get a chance to get Internet access. Hopefully the next section of the diary will be kept up to date more frequently.

As we left our room Larry suggested I go halves with him on the tip for the cleaner. Part of me (actually all of me) thought, “I’m not likely to ever stay here again, so why should I care”. But this is America, and the real costs are often hidden. Tips and taxes tip the scales when you’re least expecting. This tipping subject was a topic of conversation in the opening scene of Tarantino’s “Reservoir Dogs”, in it a group of American gangsters debate the pros and cons of tipping. If Larry and I were in the scene I’d like to think of myself as Mr Black and Larry as Mr Pink…erm..White I mean. Any way we left a poultry tip and that was only after Mr White pointed his guilt edged gun at me. 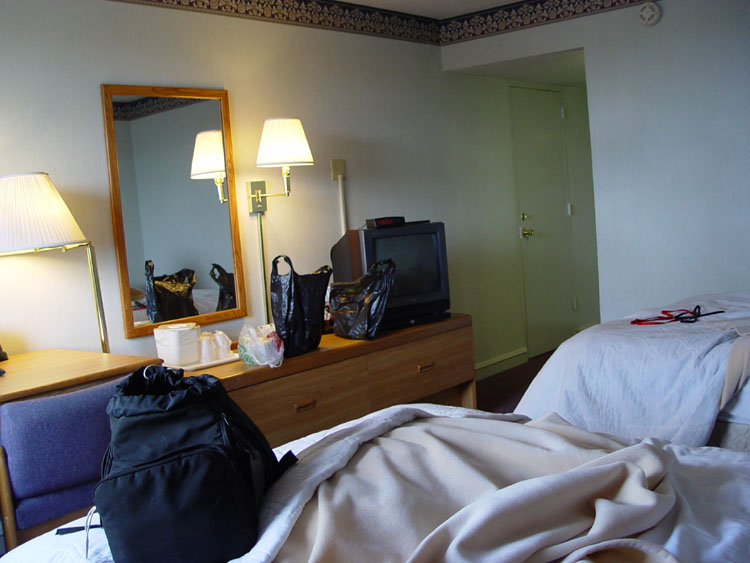 The mountain air was cool, but this is a town that was built specifically as a motorway stop off, so the legion of trucks had their effect, there would be no genteel breathing exercises, meditation or tai-chi just pack and run. There wasn’t anything else that made it worth staying around for from what we could see so Larry, who’d bought some fabric spray to get rid of the cat piss smell in the motel room, thought that it’d probably wear off about 10 minutes after we’d gone so making a quick get-away really was for the best.

I got to drive, which is fun because when you’re used to a right hand drive car and you’re in a left hand drive one, you tend to position yourself in the same place on the road as you do normally. This means your passenger ends up on the pavement. So for the first few hours all I could hear was Larry screaming “ooooooooo watch your position!!!!”

We stopped off at a McDonalds where I made the mistake of ordering a “large” tea. American regular is the same as UK large. Long journeys and 2 pints of tea are not a good combination. It’s probably a selling tactic so that you have to take a break half an hour down the line and while there you suddenly realise that the extra salted bacon triple cheese burger has made you thirsty and a two pint triple thick shake might just do the job. 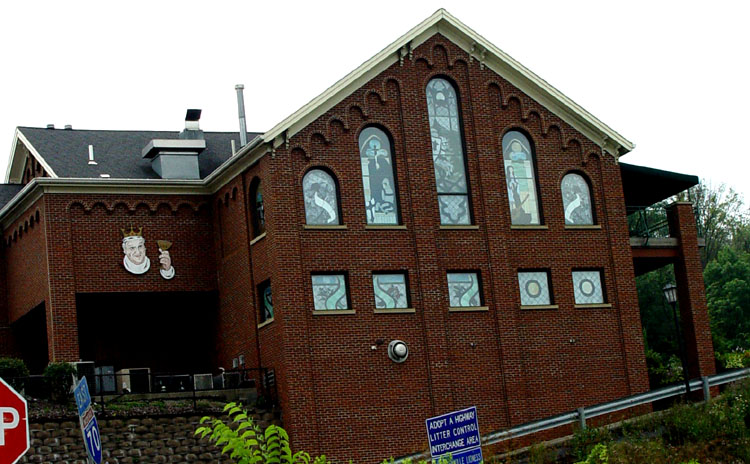 No not a church but a Steakhouse

I managed to drop off to sleep as Larry drove, somewhere in the midst of a dream that felt quite nice I could hear Larry shouting my name and shaking my leg violently. “What?” I said (as in ” someone better have died”) Larry proclaimed he needed to know something about the route, then a few seconds later he decided he’d pull over anyway and work it out later. In fact I’m writing this as we drive (Larry’s driving in case you’re worried) and it seems that there’s suddenly a lot of interesting things to look at, as he keeps pointing out. The last one was a picnic area with a special design feature, how fascinating. So anyway Larry woke me up and I was not a happy bunny. This wrong footing left me in a bad mood, which partly led to Larry and I bickering. A silence fell upon us, even the cats shut up. I began to feel a bit lonely so I picked up my mobile phone and decided to text message a few friends back in the UK, sure enough a few minutes later they sent messages back. My feeling of isolation lifted and with renewed vigor I was able to continue aggravating Larry further. In fact by the time we got to Larry’s sisters house the cats were busily meowing and hissing at each other and so were Larry and I. 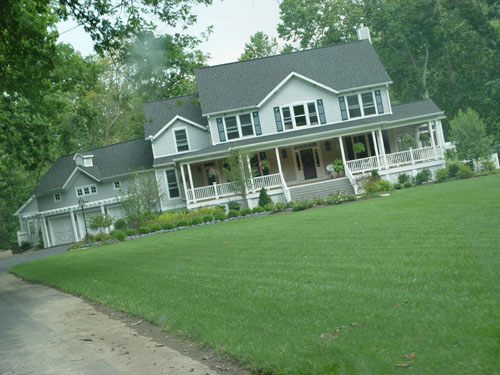 As we pulled into his sister’s driveway I was taken by surprise at the size of the property, and when we entered it I was amazed further by it’s decor. Until I get permission from her to post the pictures you’ll have to use your imagination, but for me this was a dream house. Sometimes large can be impressive, especially large and good quality. Larry’s sister tells me she thinks the “large = good” mentality that often seems to be associated with America is a problem but then she’s a psychotherapist. For the afternoon and evening we sit “out back”, which looks on to a river. The mosquitoes bite in to Larry and seem to avoid me. That’s what you get for waking me up!

As the evening light falls I hear a sound getting louder and louder until I almost imagine an animal will drop down from the trees and attack us. This is my first experience of the awakening of cicadas.I have heard cicadas before but never this loudly. Larry’s sister, Kath, tells me that some cicadas metamorphosis from bugs that stay in the round for up to 17 years. Different groups of cicadas develop over different periods, so that you’ll get the 4 year group or the 17 year one and each lot will develop together. Although harmless to humans sometimes they’ll accidently fly in to people. Another insect that catches our attention are the fireflies. Tom, Kath’s husband, brings one to the table, not to eat I’m relieved to hear, but to watch glow. It does so once then decides to not play ball. Tom tells me how as a kid he’d tie them to a piece of thread and whir them in circles above his head.

During our conversations Kathy tells me that Larry and her are directly descended from John Proctor of the Salem witch trials in the 1600’s. John Proctor was put to death and Arthur Miller, the playwright who married Marilyn Monroe, used him as his central character in the play “The Crucible”. I’d studied this play at school so I was ever so impressed. Apparently the real John Proctor had lost his first wife and his second wife was not as frigid as she’d been made out to be in the play. She too had been sentenced to death but because she was pregnant her sentence was deferred until after the baby was born, by which time the trials were abandoned and her sentence was commuted. I tell Larry I want to mention this in the diary but he’s a bit reticent, I ask him why and he says that letting people know that your family derives from early settlers is like showing off in America. I feel tempted to buy Larry a T-shirt that has written on it “From pilgrim stock so show some respect newcomers” ……… I tell Larry this and he says “Gad I’d never do that” ….. I would though!

During our meal Larry and Tom let me know how much they love the band The Rolling Stones. I tell them my mother used to go to see them and talk to them before they were famous. They seemed suitably impressed which was more than can be said for my view of my mobile phone company, T-Mobile, who sent me 3 text messages while I slept, each one waking me up in a panic to get to the phone in the darkness. The messages were all trying to get me to enter a competition which had as its first prize, wait for it,……… tickets to see The Rolling Stones Live (are they still alive?).

Pictures from the journey today 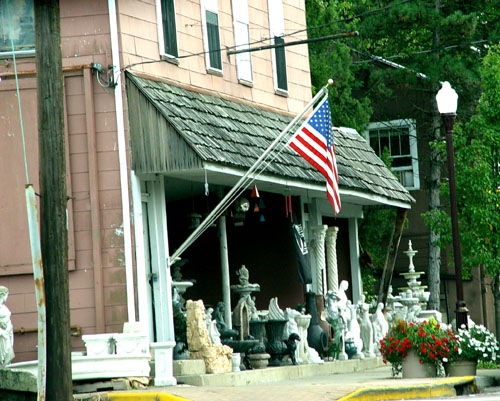 “Hello, do you have any garden gnomes?”

Larry drove all today so I got quite bored. Somewhere along the road I noticed our cars reflection in the mirrors of trucks we’d pass so I decided to try capturing this image with my camera. This may sound easy, however as I discovered, it is not. Firstly you have to pass a truck whose mirror is likely t be angled correctly and then you have to aim and zoom and hope the focus is right as you take the photo. Getting the pictures below took most of the afternoon, it became an obsession, but in the face of boredom an obsession can seem quite attractive. Hope you like the pix. 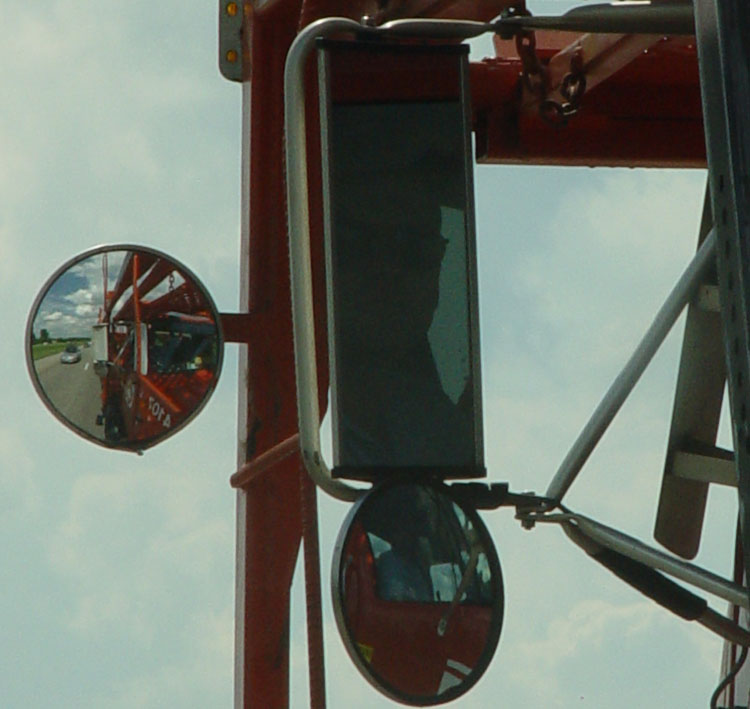 Our car is the silver car in the mirror. Now that’s a big zoom!
Sorry, did I just sound a bit American then. 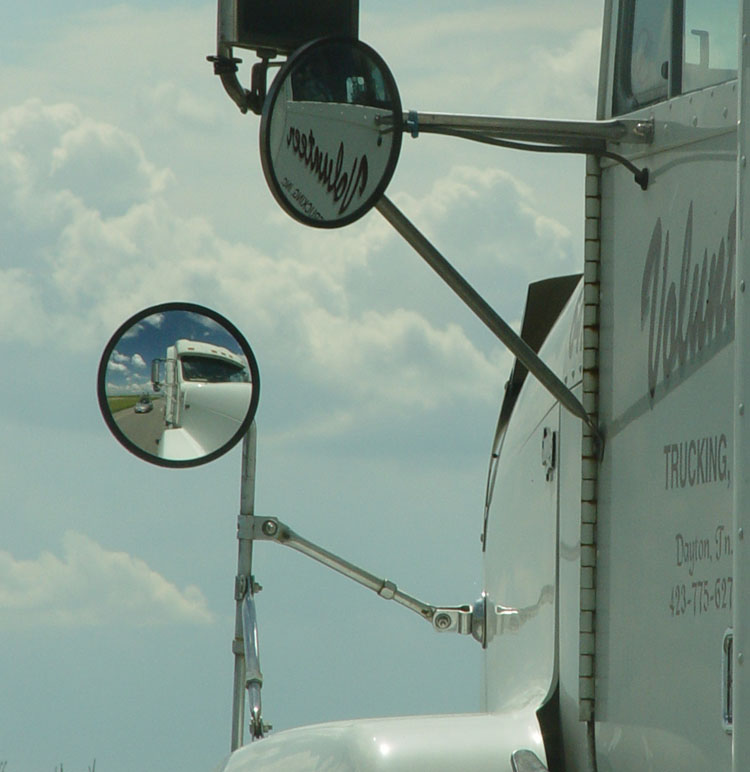 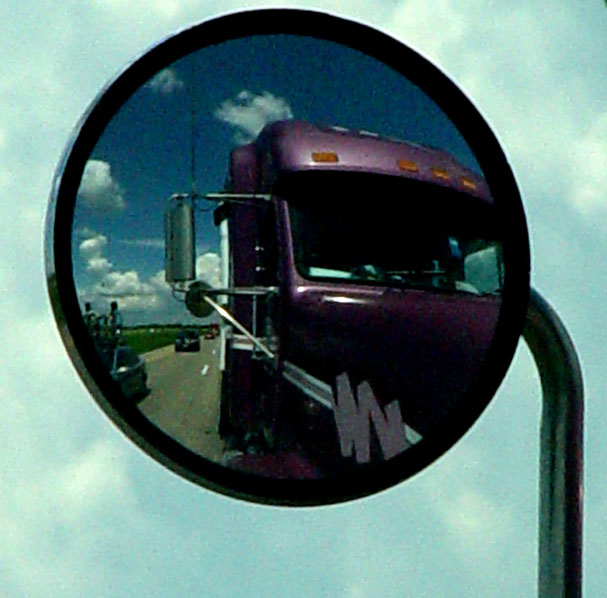 Just missed but it was close