Today I got out when there was still daylight. Fran had given me directions with regards catching trams and off I went to discover a bit more about Vienna. On my way to the tram stop I went into a computer shop, firstly to check out the prices and secondly to buy some blank CDs so I could take all the pictures home with me. The German language and customs are much less apologetic than that of the English and one has to be a bit more forthright with regards getting service. Shortly after going in to the shop a young man approached me and I muttered something resembling “sprechen Sie Englisch” to which he replied that he would be with me shortly. About 20 minutes later I was still waiting, in fact I’m still waiting now, and am actually writing this from within the shop 24 hours later! OK so that’s a bit of an exaggeration but I make this point to highlight how cultural differences can cause a lot of disharmony and in Europe there’s plenty of cultural disharmony.

When I did get to the tram stop there was one already waiting there. As I approached the driver closed the doors, I gesticulated that I’d like to get on and he gesticulated back that he would open the doors, I nodded, the doors opened, I got on, the doors closed, I sat down and then the Tram went off in completely the wrong direction. In order not to look too stupid I waited on the tram for a couple of stops then got off and nonchalantly pretended to look in shop windows until the tram went off. Then I crossed the road and got another tram back to where I started. The public transport system in Vienna is renowned for being very impressive and outside of not all of its stock being wheelchair accessible it certainly seemed that way. In London the buses don’t appear to adhere to time tables and it’s often hard to get from one point to another, requiring multiple changes and multiple waits. If the public transport system in London was even close to this one I’d certainly use it a lot more. 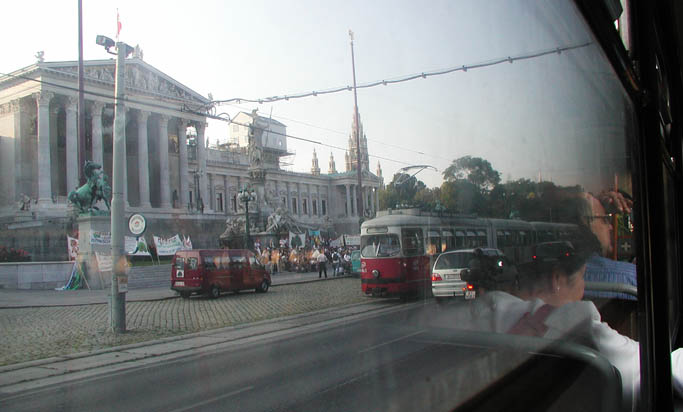 The Public transport system uses mainly trams and a subway system, it is also cheap to use compared to the UK 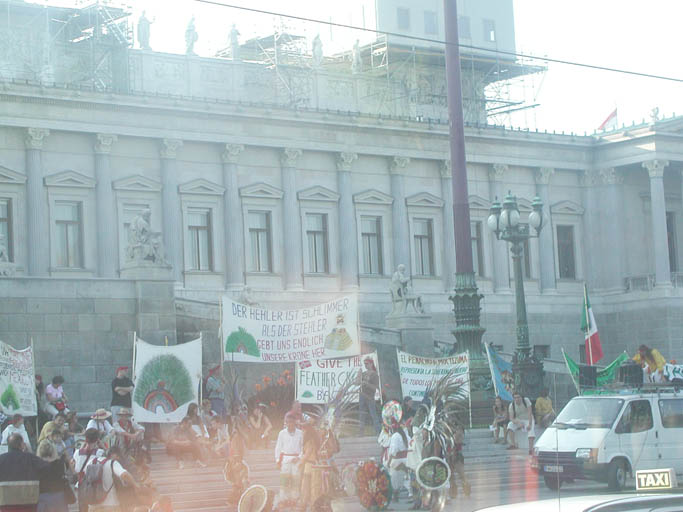 Outside Parliament a demo takes place 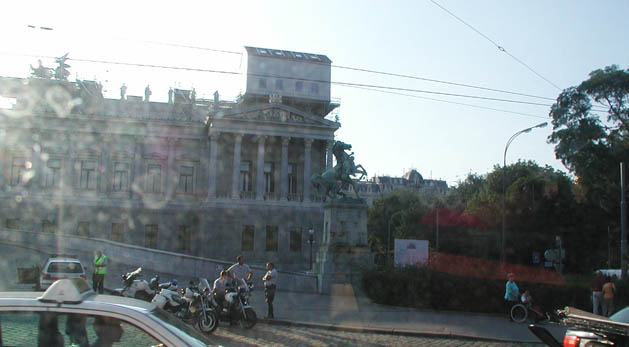 The police wait on the sidelines (notice the house on top of the building.)

No not a piece of contemporary art, but a way of protecting a statue while restoration work takes place 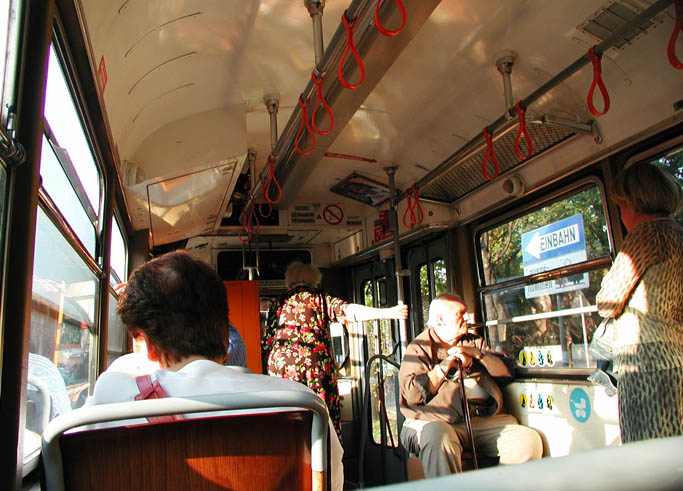 Notice the old man on the right. As we passed parliament he started to give a guided tour to the two Italian people
in front of me in a rather loud manner. He looked at me and asked me something in
German (I had tourist written across my brow), I said “Korean”.
He looked a bit disgusted then carried on with the Italian guided tour.

The Italians got off and so did he in close pursuit 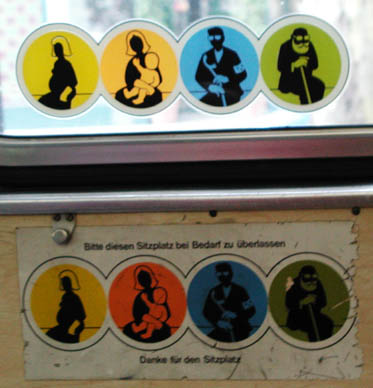 These stickers warning people that this chair is reserved
for people who may be more needy annoy me.
That’s because I think this rule should apply to all chairs on public transport. 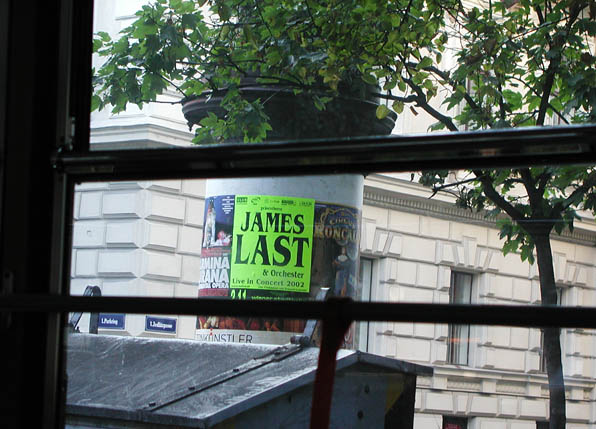 Vienna is one of the music capitals of the world, as you can see from this poster. 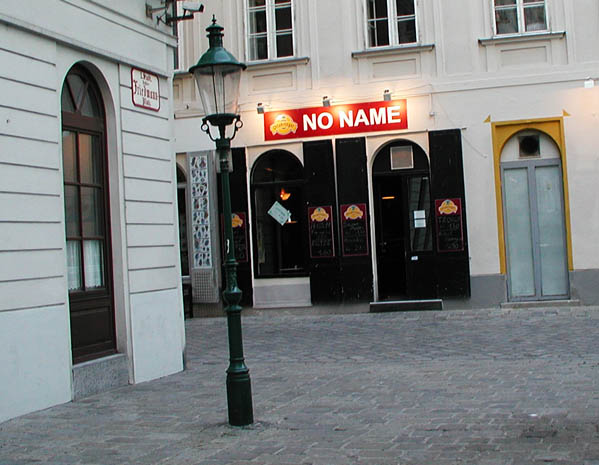 That’s Viennese humour for you

Once back home from my little sortie Fran and I spent the evening out with her mother. I last met her mother, Dorothy, about 17 years ago. I was and still am a friend of Fran’s sister before meeting Fran. Her sister and I met when I was 17, sometime later I met Francesca while visiting her sister, we got on and became friends too. Back in those days we both lived in Sutton, a town 10 miles south of central London. I went off to college but returned home for a year when I was 20 and during that time I saw Fran quite a bit. That time in our lives is remembered with little nostalgia as for us it was a time of waiting. Francesca was deciding what to do in life and I was building up a portfolio of work with an aim to getting on a fine art degree course, which I did. I have several enduring memories of Francesca during that time, one was of going up to Hyde Park in London with her and a friend to watch a firework display to Handel’s water music, this is especially memorable because it was the same day as Live Aid (1985). The other memory is of being in Francesca’s kitchen and there being an open Tupperware bowl full of chocolate powder. As Fran’s back was turned I buried my face into the container to take a mouthful. Unfortunately, for me, it was not drinking chocolate but the bitterest cooking chocolate powder I have ever tasted. Needless to say Francesca remembers neither of these occasions!

On the plane here, Christina, had advised I try a “Hoydigar” {Heurigen}, which is a place where food and drink is served and a jolly time is had by all. It’s a traditional thing, so tonight we went to one. The food is served at a buffet and what you take is weighed and charged for by weight, you then go to your bench and table and …………………… well eat drink and be merry! 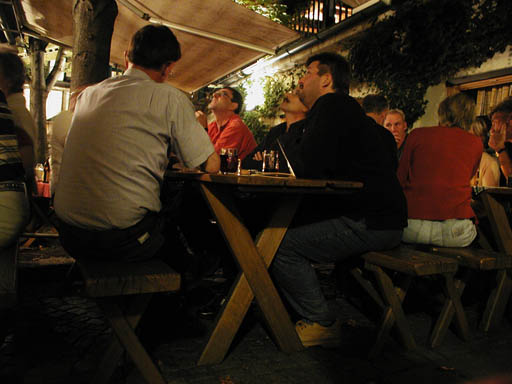 Don’t ask! They were slightly worse for wear by this point

After the meal Dorothy gave us a guided tour, however this wasn’t of normal tourist places, no, this was of places that featured in her life. Such as where she worked, her banks, the supermarket she uses (both of them), her student’s house and finally her place. I was a little bit taken back by the tour because it reminded me of what I do to people in London, except there I say things like : This is where I went to college; here’s my bank; I had a girlfriend who lived here; I bought my car from here etc……. Now I know what I put my long suffering guests through!

The one thing I was really struck by was the grave yard next to Dorothy’s house, in it were hundreds of red lights. I live next to a graveyard in London but it’s just dead dark there. 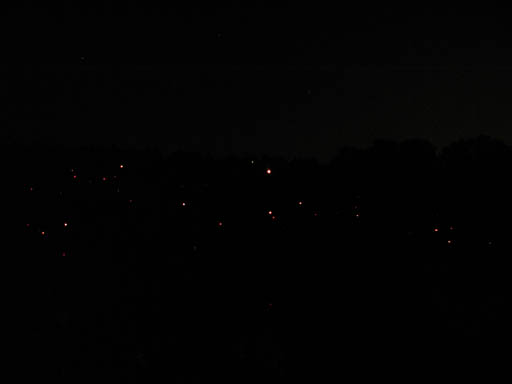 The lights are on the graves in the graveyard next to Dorothy’s place. 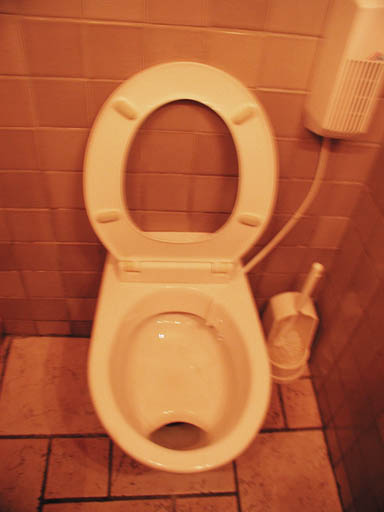 By the way… I saw this toilet in the Hoydigar place, and was struck by the
sensor cable that turns on the air freshener. How nice!