Today is my last full day in Vienna for this trip so I thought I’d make the most of it. With no effort spared I made sure I was up and out of the flat by 3pm. Vienna is a culturally rich city so Fran and I decided to make our way to a restaurant who are known for their English breakfasts. This entailed a 10 minute walk past the Cathedral and “religious wares” shops. Austria is mainly a Catholic country so seeing Monks and Clergy men is not unusual.

As we walked to the restaurant we came across a shop that sold religious artifact.

Above is the sublime and below….. 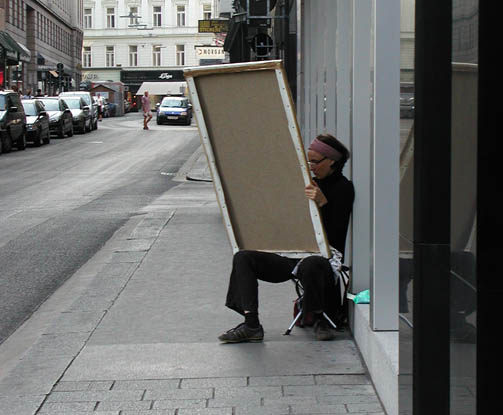 An Artist unassumingly sketches the Cathedral Spire,
(judging by the aspect ratio of the Canvas)

The horse and cart taxi rank for that romantic tour of the city,
the occasional waft of horse manure when sitting outside cafes helps one to appreciate car pollution.

There is a sense of a bygone era in Vienna, the architecture though much of it was destroyed during the war was rebuilt in its original style. Unlike many European cities which attempted to build a new world which generally resulted in a soulless social nightmare. Even though some of the facades here are not original one doesn’t notice, or want to notice. This is my first time in a Germanic country so possibly if this type of architecture is all one sees then maybe it does get tiresome, however most people I spoke to who lived here (about 3 in all) said that they felt the city was a beautiful backdrop to a civilised way of life ( ve don’t mention zee voor). Although as with most cities Vienna has its share of problems it is a place where people feel safe walking out late at night (that’s about 8pm to me and you). 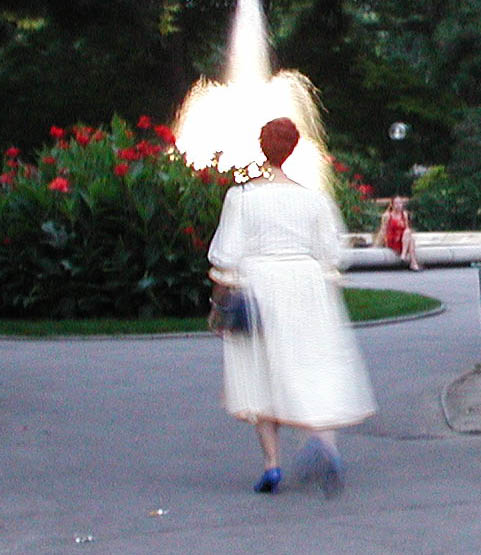 Here a woman walks around in National Costume, one of many I saw
today as this is an activity which is particularly enjoyed on a Sunday.

For the Viennese there is a sense of heritage and pride in their city, and while to some the atmosphere of tradition may feel stifling to many it’s a refuge to others. The restaurant we ended up in had a very nostalgic quality about it and obviously played on that to bring in the tourists. I’m a sucker for all that pretense and merrily took photo after photo of the place. Here are a few of them 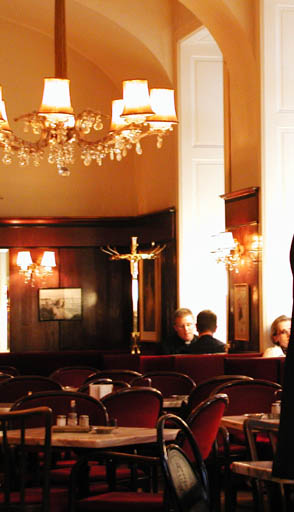 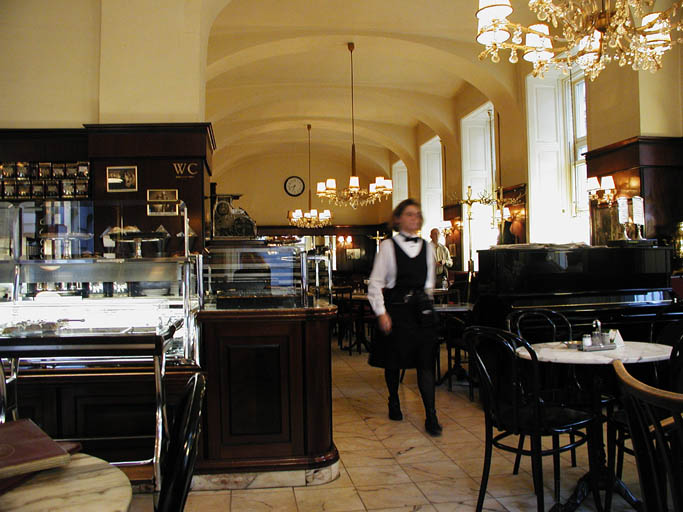 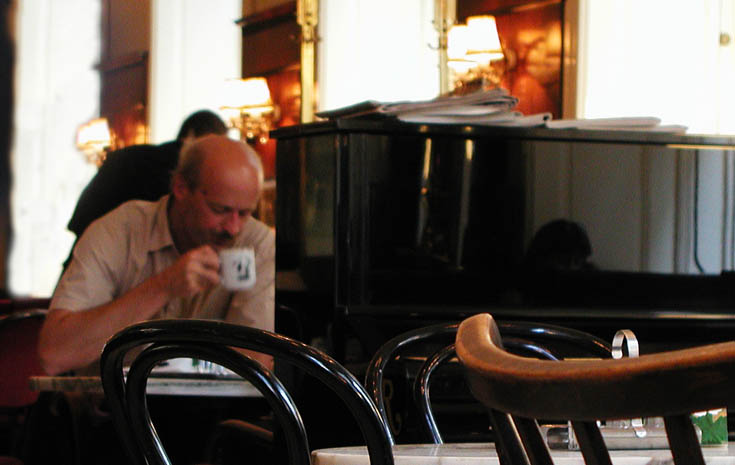 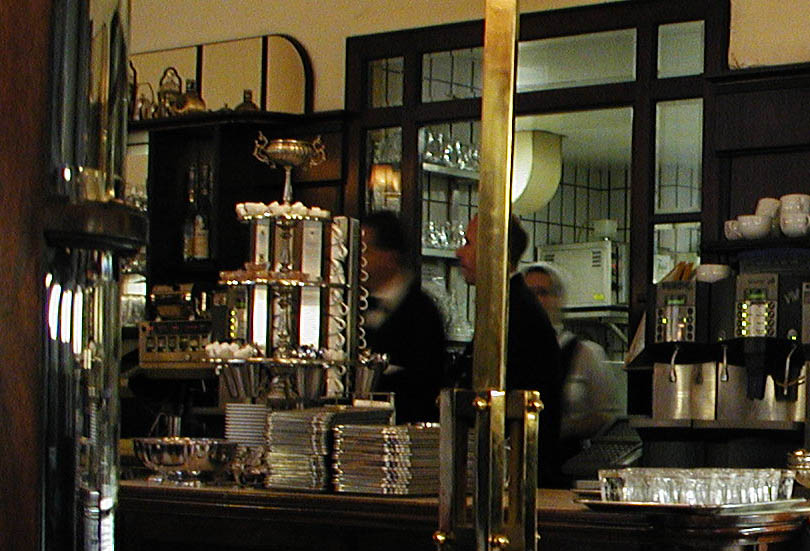 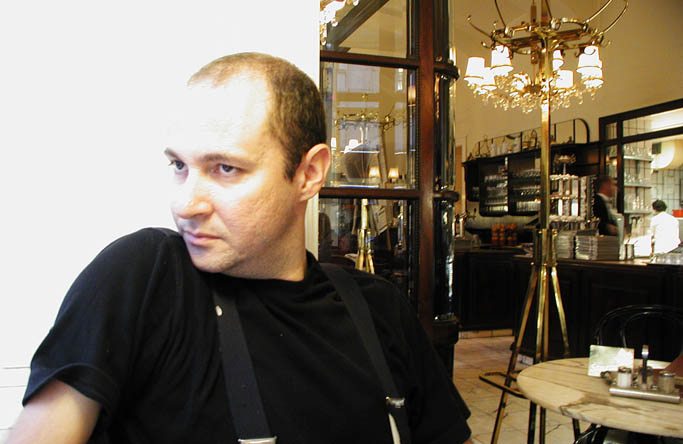 I wasn’t actually posing ….. honest ……. In fact I was debating if Fran and I could run fast
enough and long enough to get away without paying the bill. I thought given I can’t walk far that it wasn’t a good idea but then I noticed the man pictured below and could see the bike stand just down the road (pictured below), and was just about to use my Nokia phone to arrange delivery of my getaway vehicle when Fran caught me on camera. So do you ever get thoughts like that? Right, so it’s just me then? 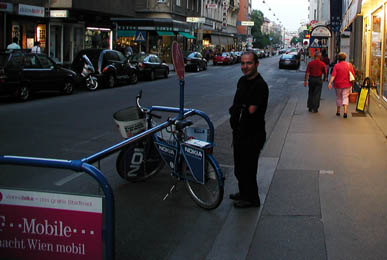 I have a cunning plan Fran! We paid the bill then caught a tram that continually circles the city centre, which having done it twice yesterday I was a bit of an expert on by now. I only realised i’d done it twice when I started to get a continual feeling of deja-vu. 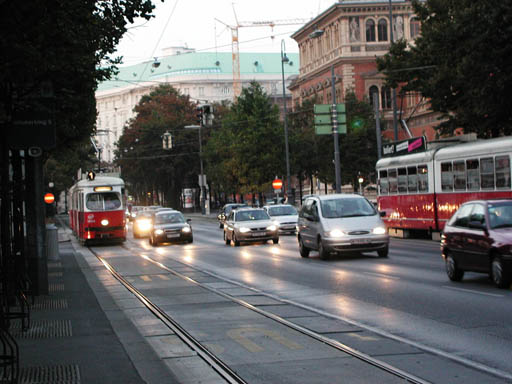 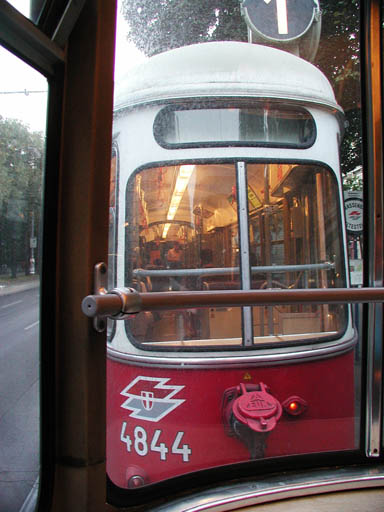 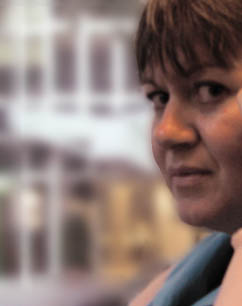 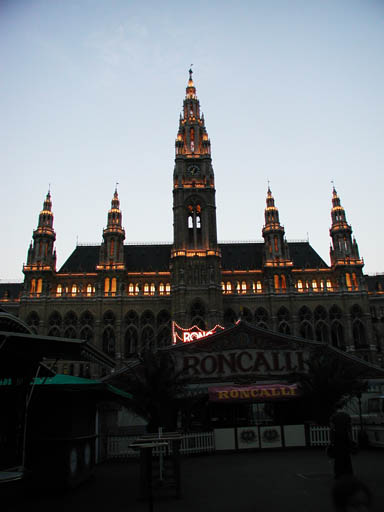 No not a Disney theme park (or so I was told) but the Rathause. In English “City Hall” but Rat House is actually more appropriate).Outside was a circus. Even more fitting, a place where people sit in a ring while others clown around and do balancing acts. 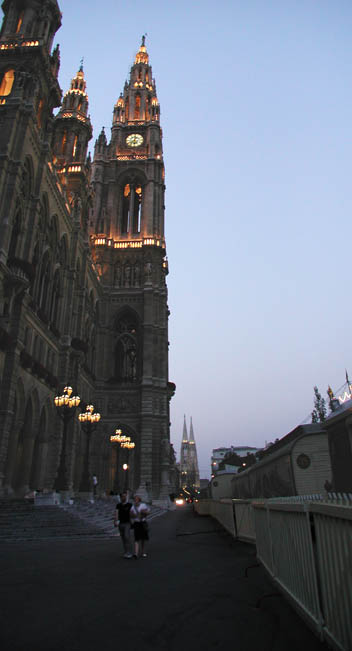 Anyway we got off the Tram here. “City Hall” 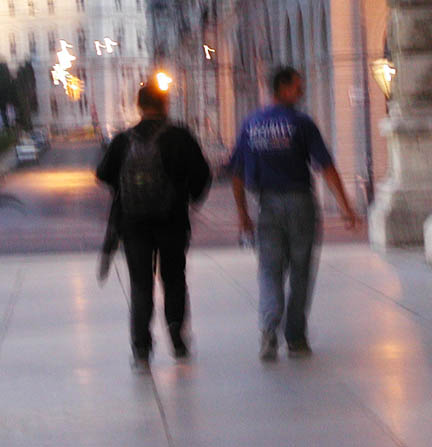 As we walked in front of City Hall I noticed some Skateboarders trying out techniques along the steps to the front doors. As we got closer I saw what looked like a security man start to tell them off in quite a firm manner. The Skateboarders, who looked about 16 years old, picked up their boards and walked off. The “Security” men approached us laughing, and it soon became apparent that apart from a tee-shirt that had the word “security” written on it, these men were actually down and outs pretending to be security guards. A logo can get you a long way. Once I was in London with a car full of friends when we saw someone across the road we knew.
I hooted my horn and shouted after them but they didn’t notice. I U-turned my car to the other side of the road where upon they walked into an alleyway. Another man however walked up to us and asked if he could help us, I looked him in the eye and said “It’s OK sir, we’re Police officers and we were just trying to apprehend someone” He looked at us all and said “I’m very sorry officers” to which I said “don’t worry sir” and drove off. 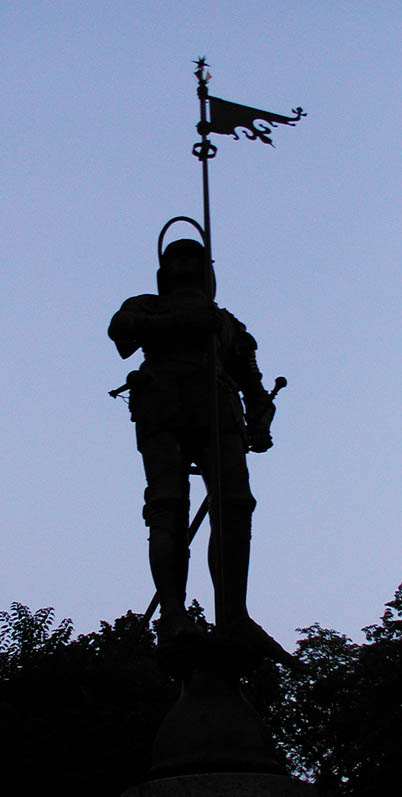 The Knight who says “Nee” 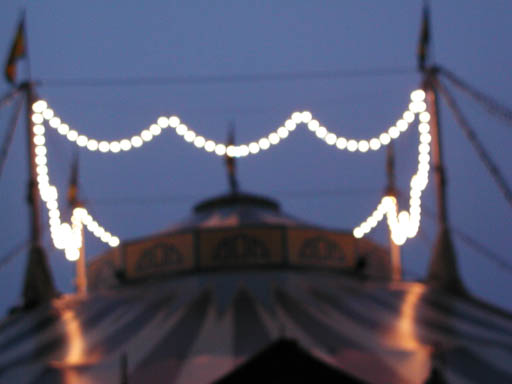 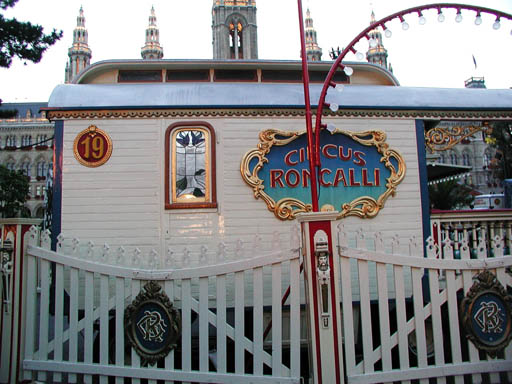 After all this walking it was time to take in the city fumes over a cup of tea. Below is a photo of Fran telling the waiter what tip she’s going to give him. In Vienna when one asks for the bill the waiter/waitress tells you the amount owed to which one responds with what amount you will pay, which is supposed to be the price they ask for plus the tip, which tends to be between 7 and 10%. 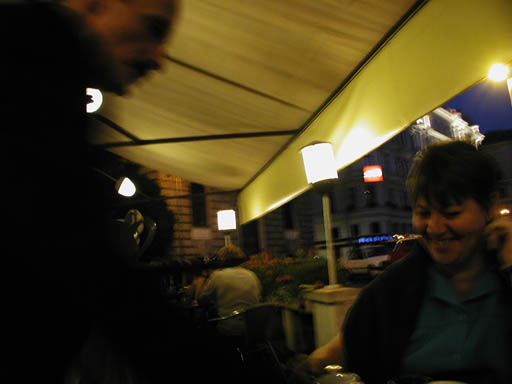 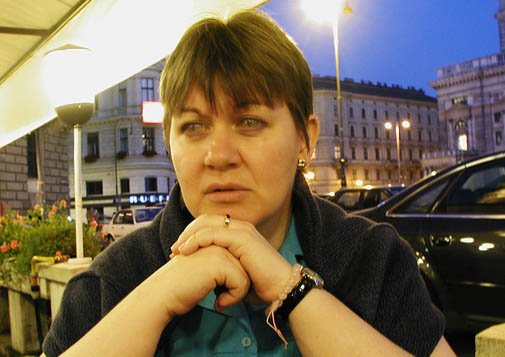 No, Francesca hasn’t got an eye disorder, isn’t turning in to the devil, neither is she
crying over the bill – I was though-, however this is the effect you get if you use a slow
shutter speed, tell your subject not to move, and then keeping their head still they move their eyes.

So we hopped onto the tram, and made our way back to Fran’s place where I got ready to return home tomorrow. On the way we came across the advert below, which seems to suggest Taiwan’s Government advertising bureau could do with a session at a Western advertising consultancy. 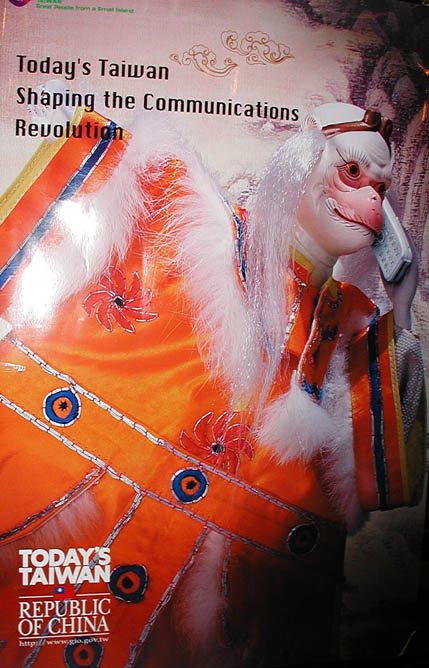