Geography and timing define the course of our lives far more than most of us realise. Where we are born and where we are positioned at precise moments determine much of our life’s experiences and often, most significantly ,how we are likely to die. Last night Larry and I had argued over what time to set off for our journey to The Grand Canyon, he had wanted to set off at 6.30 to miss the rush hour traffic and I had said that because I’m up writing this that I would get hardly any sleep, which would mean I’d feel too tired throughout the day, we hissed and growled at each other a bit then compromised to leave around 8 am. This turned out to be 8.30 in reality but still we were on our way and luckily the rush hour was over. We’d listened to the traffic reports and heard that there had been two serious crashes near to routes we were going to take but went on any way. About 10 minutes in to our journey I heard Larry say “oh my God look at that” I looked up and saw a Jeep type car rolling along along side ways, its nose to the central barrier, bits of car flying off. The car came to a stand still the right way up, and even though we were still passing at about 40 mph I could see the front windscreen was smashed, the air bag was out and the driver seemed to motion an action of coming around and not believing what had happened. Then we were gone. “Shit” I said to Larry, “I wish I’d had my camera ready”.

This was the second crash I’d witnessed while driving on US roads, the other had been a surreal moment on the road outside of Nashville. A car in front of us had spun out of control, at first it looked as if it was taking a turn off of the motorway, then it suddenly swished across to the other side of the road, again nosing to the central reservation. In that instance the vehicle didn’t hit anything, and maneuvered itself back on to the carriage way and went on obviously a bit shaken.

I don’t know if you have that superstitious thing about things happening in threes, but I do, so after seeing two crashes I was a bit worried about whether I’d be in the third one. Because Larry has a courtesy car at the moment I’m not insured to drive so he’s doing all the driving. On the whole Larry’s OK at driving, it’s just when he tends to look away from the road the car tends to move in to a different lane without him realising until he looks back at the road. Normally this wouldn’t be such a problem but we’re taking a scenic route, so whenever I hear Larry say “Oh my, this view is so fucking beautiful” I would quickly say “Just keep your eyes on the road Larry!”. At some point on the journey Larry had told me that he’d once been stopped by a police officer after he’d done a very tiring cycling event and the officer had warned him that he’d been swerving around. I said to Larry that he should have said “Oh that’s OK officer, that’s how I always drive”. Larry wasn’t amused.

The journey to the Grand Canyon takes us up through the desert to the mountains across some plains through an area of red rocks and then some more mountains and then to the Canyon it self. As we drive along Larry starts telling me how fantastic the scenery is here compared to the UK, so slightly antagonised I inform him of where in the UK it’s possible to see similar landscapes.

This could be anywhere but I just like the sky

This could be somewhere in Northern England, Scotland or Wales.

And so could this 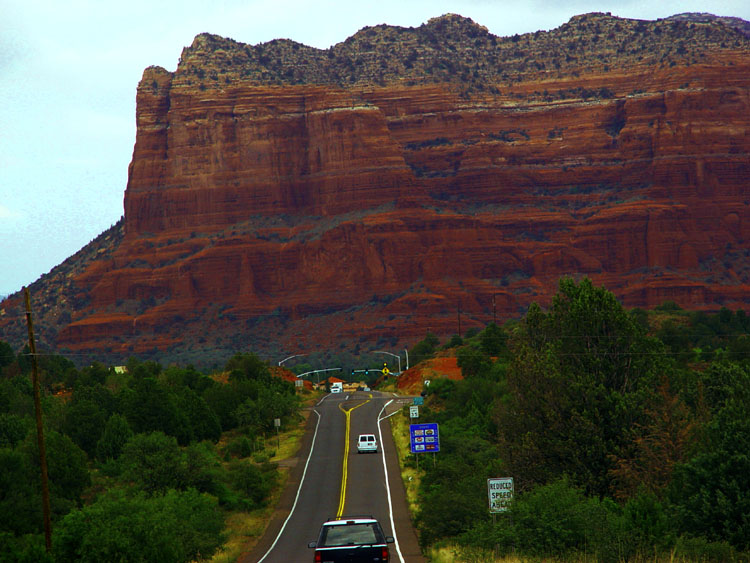 Notice the three rocks above, do they look like three heads. The two on the left are talking to each other while the one on the right seems to be annoyed or unhappy. The rocks on the left look like they have their hands up in front of their faces and are whispering. Can you see it? 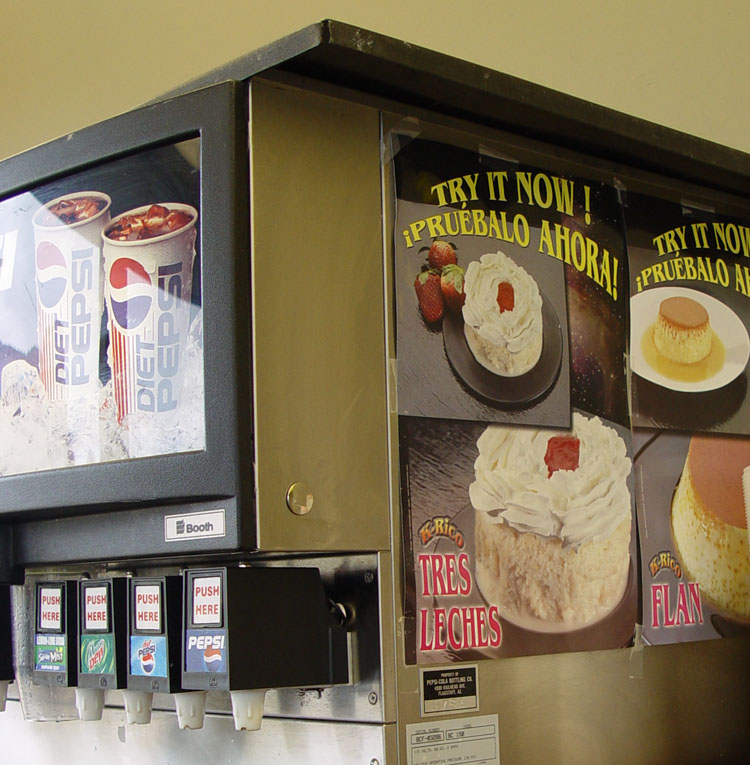 While on the subject of myths, I had what I call a mythological food experience today. This is when you eat something and it tastes fantastic. So fantastic that no matter how often you try to repeat the experience afterwards it never touches you in the same way. Well today we stopped off at a Mexican fast food place and I had a dessert, which consisted of a sponge cake doused in cream and syrup and I almost did the scene from “When Harry Met Sally” where Meg Ryan pretends to have an orgasm in a restaurant. With every mouthful I’d say, “Oh this is gorgeous” and so on, Larry would cough slightly and look at those around us politely smiling. A man sitting next to us who had only one arm hid his stump just to let everyone know we weren’t together and to top it off I stood up in front of all the other people eating and took a photograph of the poster for the dessert (not allowed to say pudding over here, it means something quite different). Every time I see the poster I feel a slight tinge of sorrow, knowing we’ll probably never meet again……………………. adios sabroso amigo!

Back to the myths. The thing about the rocks looking like heads is , that as far as I know I just made it up. Just like the face we can see in the moon it’s almost impossible not to imbue things with meaning related to ourselves. The Red Native American tribes had different explanations as to how the grand Canyon had come about. One tribe believed that one of their mythological figures had cast a fireball across the landscape, while another tribe, the Hopi, believed that one of their mythological figures had opened a jar which he wasn’t supposed to, and as he did 3 forks of lightning struck the Earth one of which created the grand Canyon. The truth though, as far as our culture is concerned, is possibly more impressive.

Two continental plates struck each other, and rather than there being a crunching up effect one slid above the other and was pushed up around 7000 feet. The part that ended up on top had originally been at the bottom of the ocean. Imagine how upsetting that must have been for the fish, still it was probably better than the fate awaiting those on the bit crushed underneath, although they did have a few hundred million years to get out of the way.

The next major contribution to creating the Canyon was to have a steep river running through it, the Colorado. The forces generated by steep rivers can be immense, able to move rocks and boulders over time. So first you have a mass of land whose geological structure is mainly horizontal and then you have a powerful river running through it. These factors combined with an arid landscape that was easily eroded because it couldn’t sustain vegetation that will slow down erosion and over time you get a Grand Canyon. Now wasn’t that worth knowing about? For me the thought of a mass of land being pushed hundreds of miles across and 7000 or more feet high is just as magical as the myths. 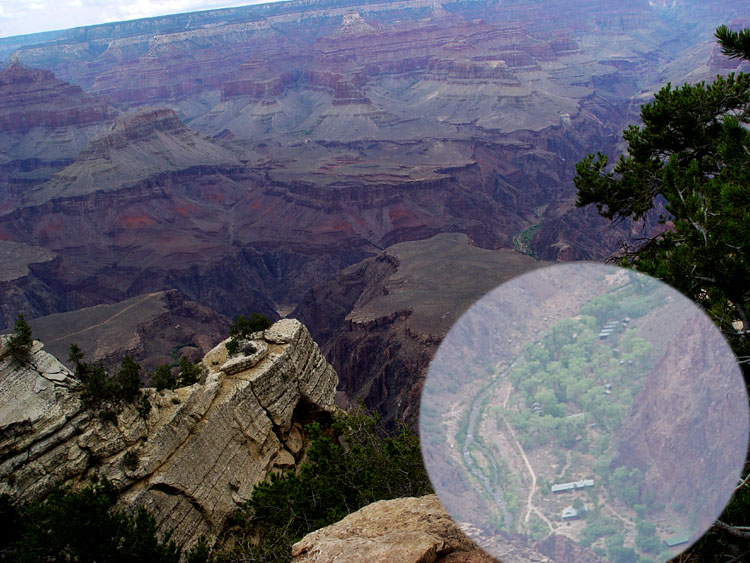 It’s hard to get a sense of the scale of the Canyon until you use the zoom on my super sexy digital camera. The zoomed in part is of the green bit just above the circle.

Because I’ve seen postcards, TV and films showing the Grand Canyon I think my sense of awe was stifled. Apart from feeling a bit queasy when looking down I felt that standing at the top and looking in to the Canyon was just one step from looking at it on the TV and to get any real sense of it one would have to hike in to it, a seven mile trip one way, so no chance for me. 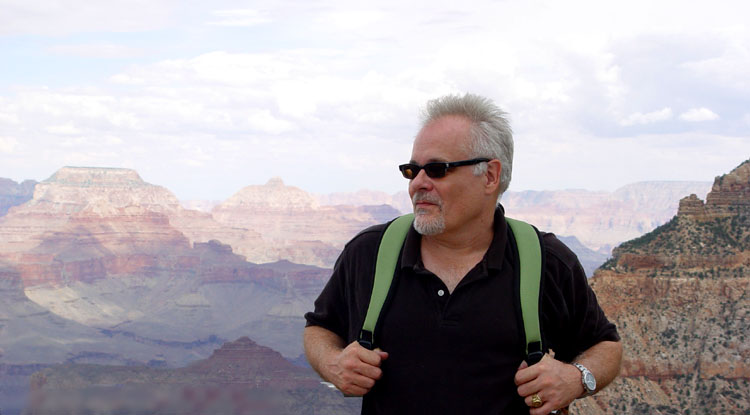 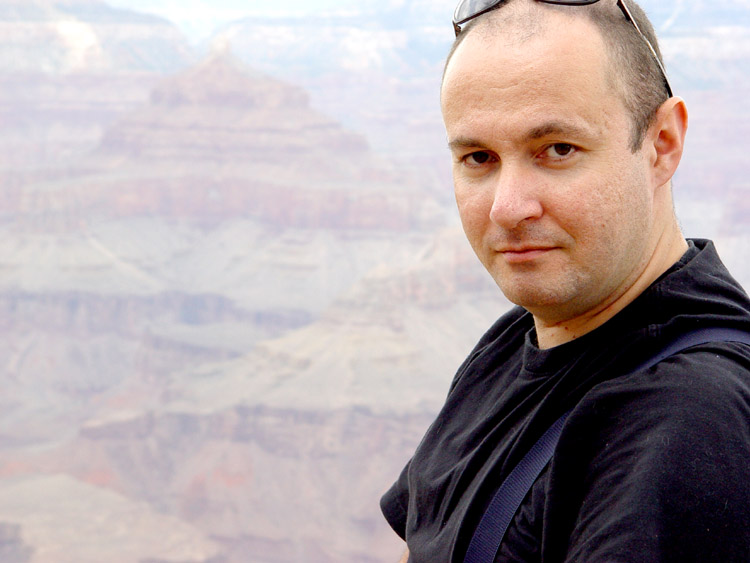 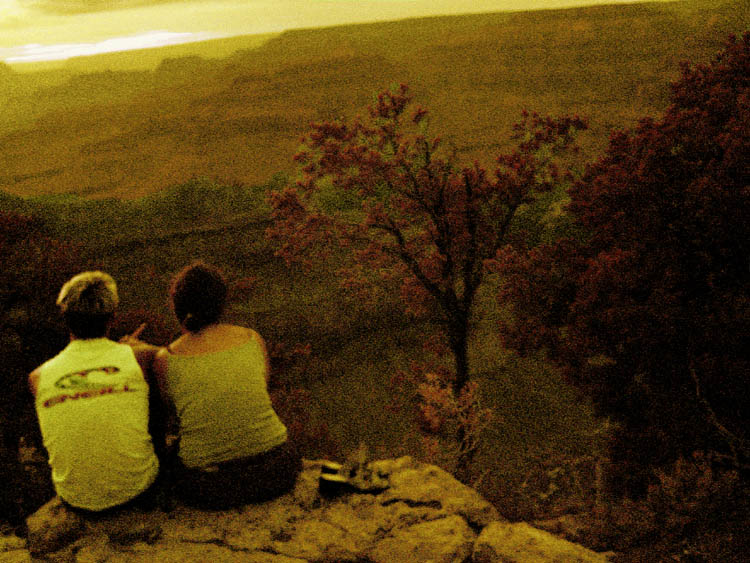 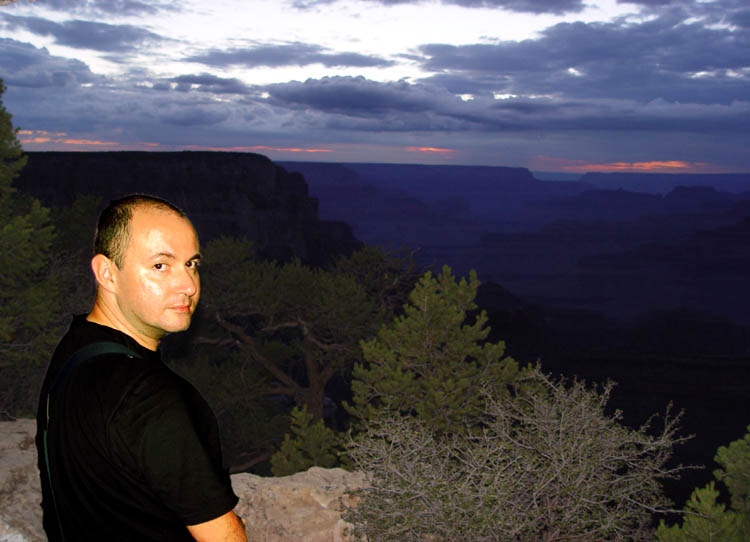 An innocent looking me and no more annoying happy couple. I know it looks like I’ve superimposed a picture of me in front of one of the Grand Canyon, but honest I was there.

Thanks to our early start I spent 3 hours this afternoon sleeping. Mr. “I like to get up at the crack of dawn” (Larry), fell asleep too. This evening I must have had the worst canteen food I’ve had for years and that’s saying something because I was brought up on hospital food. I won’t mention the I won’t mention the Maswik Centre’s canteen, just in case you want to try it out. The rooms were quite good though.

We watched the sun go down alongside lot’s of happy romantic couples. How bloody nice for them. Yes I admit it, I was envious, and I admit it I’m sad and lonely…………… Are you happy now?

Once the sun went down I’d hoped there’d be some outdoor parties or social events but no, so it was back to the hotel room where we delighted in the countryside pursuit of ……..watching TV. I wanted to watch American Pie 2 but Larry wanted to listen to then fall asleep during watch a program about misspending in the Pentagon.

The news ran a feature on a young man whose car had spilled over the central reservation and hit an oncoming truck, killing both drivers. The father of the boy was on TV saying that his son’s first word had been “car”. For me there was something very disturbing about getting a vox-pop of a newly deceased persons parent. Larry wondered why all the attention had been just on the young man rather than the totally innocent truck driver, who was probably driving along merrily minding his own business.

Does a TV crash count in my things coming in threes superstition?

You know that dream of living happily in the country is it true or a myth? Answers on a postcard of the Grand Canyon please.