Being bored at night is one way to make sure that you’ll get up early. So by 9am both Larry and I were up, breakfasted, checked out and on our way to a Grand Canyon geological lecture. Did you really think I knew that stuff about the the Grand Canyon before I got here? On our way to the lecture we had to get a bus, as for ecological reasons cars are limited to certain areas in the vicinity. On our way the bus driver told us that there are 2600 workers and their families who live within the park. Many of them live within an area where there’s no water supply so once a week they have to transport water from nearby areas back to their places. “It’s a kind of pioneer spirit…… I feel like I died and woke up in heaven” She said. 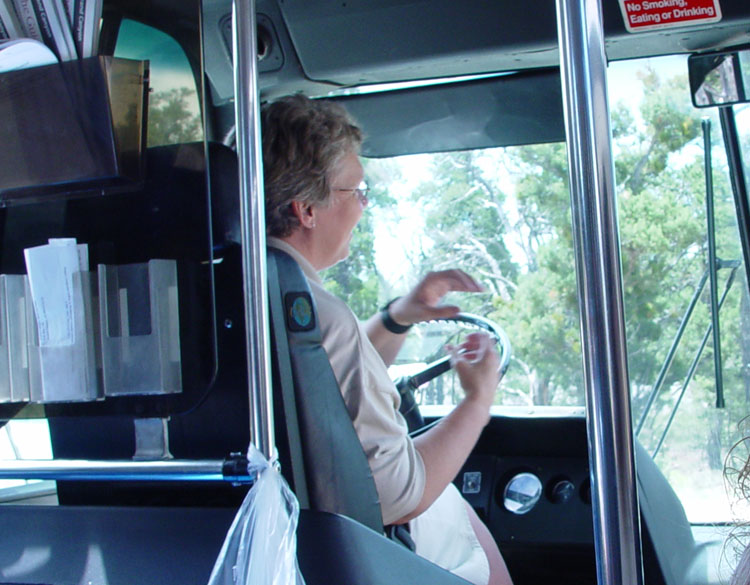 The Rabbits they’re so cute. They look at you with their big brown eyes and then you just twist their head back like this. 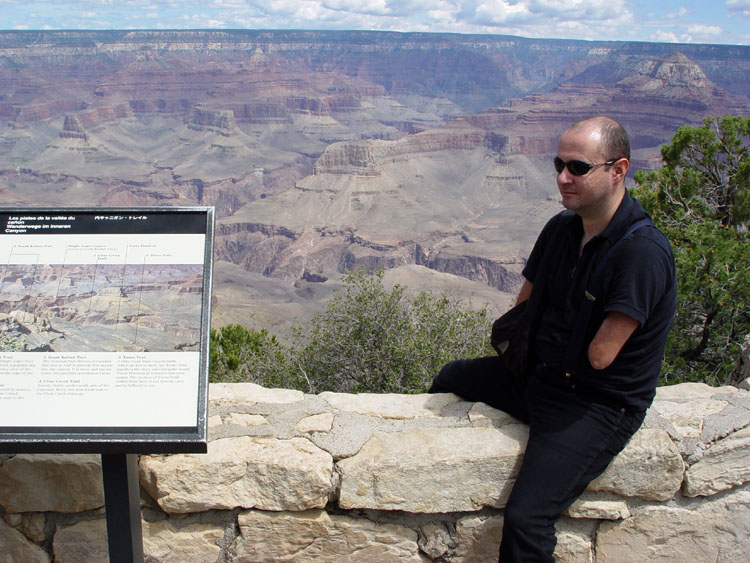 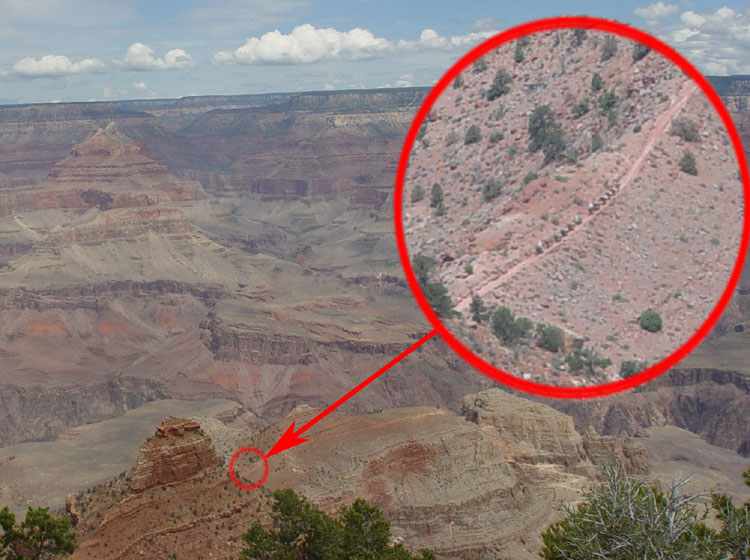 Here’s a picture of a mule train. I put it in so you’d be even more impressed with my camera The Grand Canyon. I couldn’t see the mules at first but the guy next to me could. He was looking through his camcorder, when I asked him where they were. He said “See that big red pointy rock? Put two fingers out to the right of it and you’ll see ’em” He looked away from his camera at me, and I smiled and he smiled, he said “I guess that might be difficult for you”, “no I can manage two fingers just about” I said. 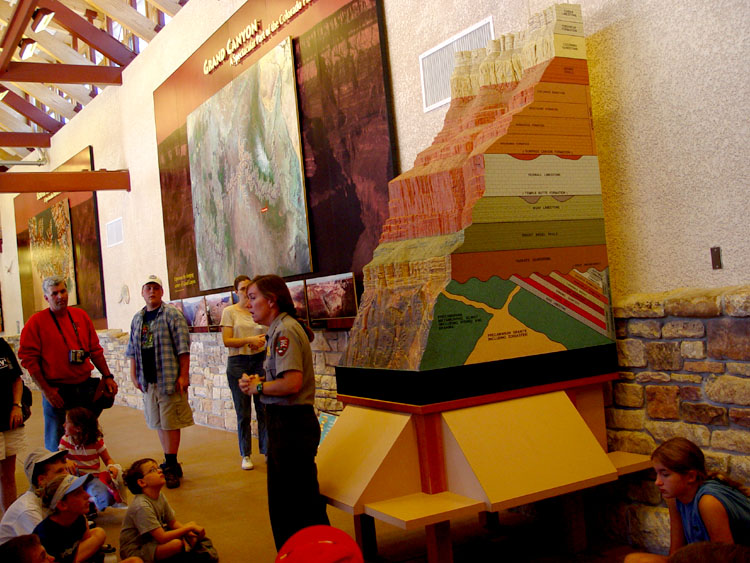 Larry and attended a lecture on Geology because we thought it would make us look clever. It was actually aimed at children, even so that didn’t stop us trying to answer every rhetorical question first. I actually got one right, which seemed to upset a few of the kids. It made me feel good for the rest of the day though. 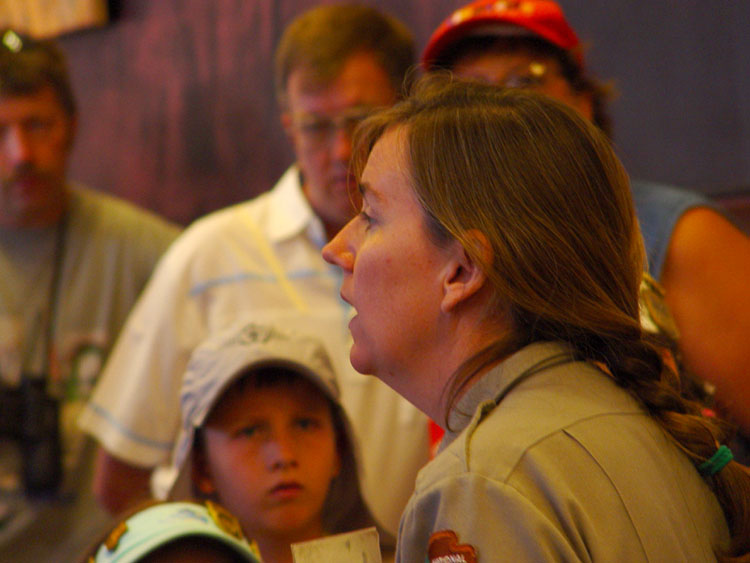 Here’s our entertainer lecturer, notice she’s turned her head away from me slightly,
just when I was going to answer another question. 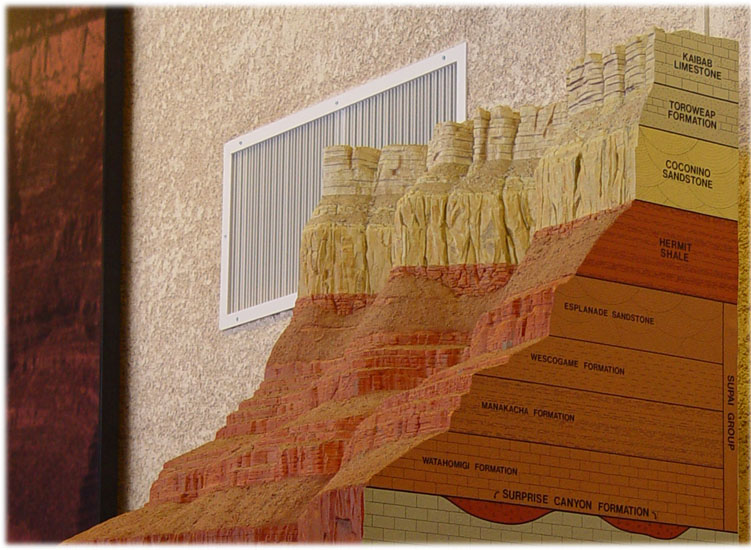 The different layers of rocks erode at different rates hence the cliffs and banks. 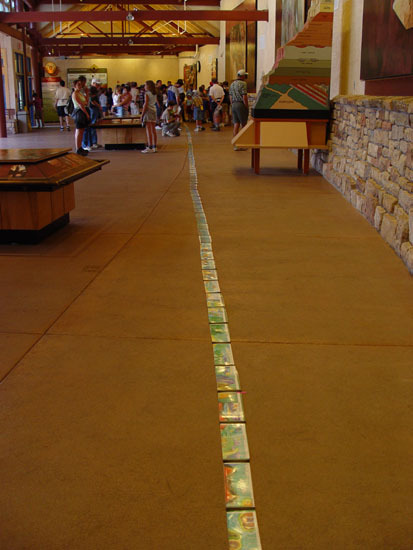 This is a book the lecturer coloured in wrote. It shows the timeline of
the development of the geology of the Grand Canyon within the context of the earth’s geological development. Every 1/4 inch represents 1 million years.
There are 4800 1/4 inches. Most of the direct creation of the Grand Canyon actually occurred in the time represented by the last few pages of the book. 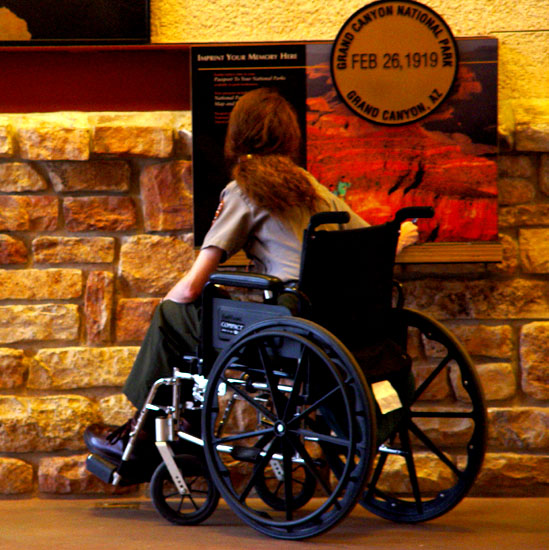 In most American TV programs you tend to see a person wheeling by in their
wheelchair. I thought I better follow the trend.

Now I expect you’ve noticed me mention my new camera a few times on this trip. In the UK I hardly ever see anyone else with the same one. Can you imagine my utter disgust when another member of the audience lecture started to do tai-chi with 4 cameras, two had extra expensive lenses!!! I won’t mention that he was a Japanese tourist, not wanting to perpetuate the stereotype and all that. It turned out that he was doing stereoscopic (3D) imaging. 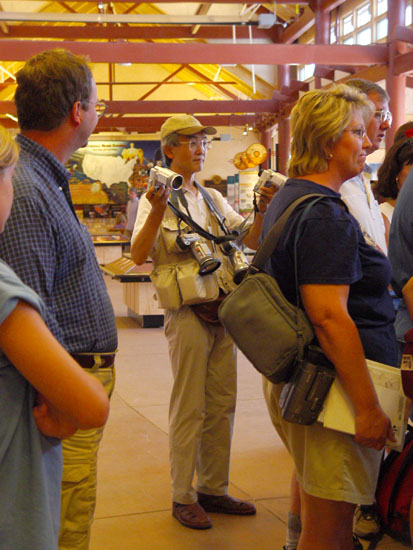 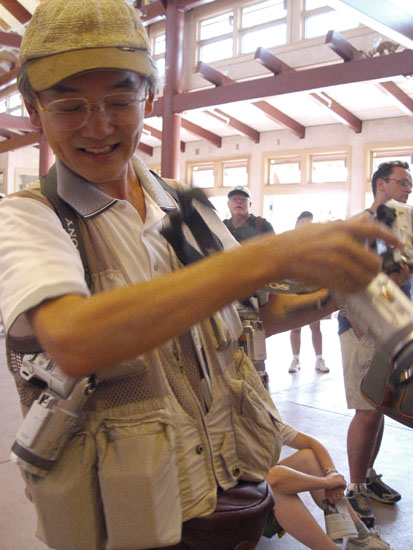 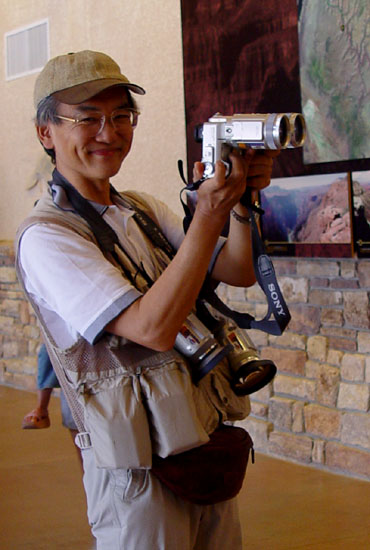 The cameraman exposed. Is the look he’s giving me
Japanese for “fuck off”? 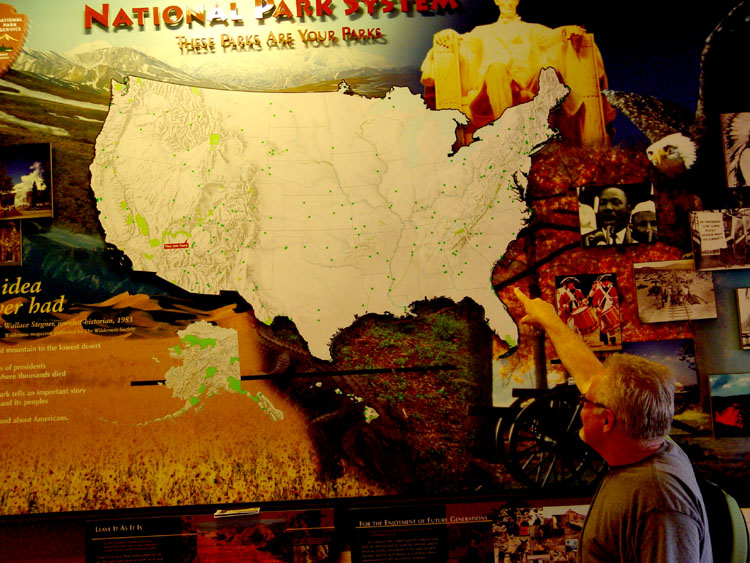 Larry gets a bit emotional when he sees a map of the US He decides to show me where
we drove. As if I don’t know…. I WAS THERE!

After viewing the Grand Canyon from a few different places we decided to make our way back to Phoenix. 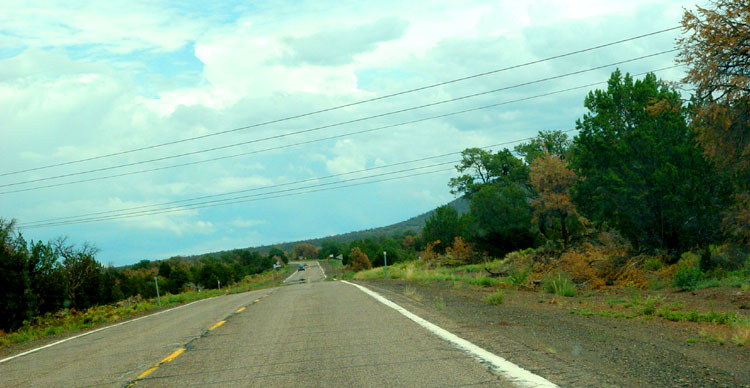 Notice how low the power cables are. 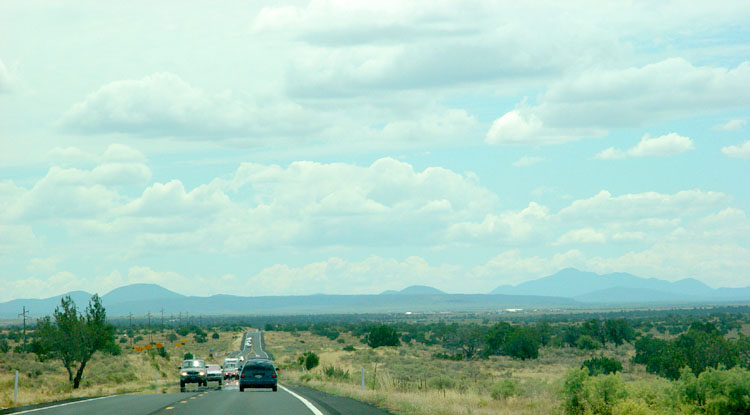 The Prairie ……. somewhat reminiscent of Hampstead Heath I felt. 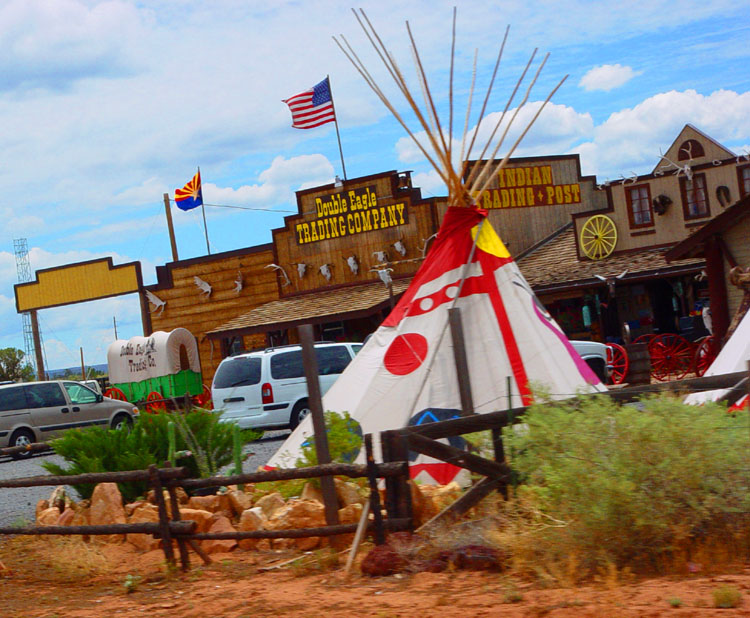 There seemed to be lots of Native American and “Wild west” tourist spots. We didn’t stop to look but did feel there was something denigrating about them. 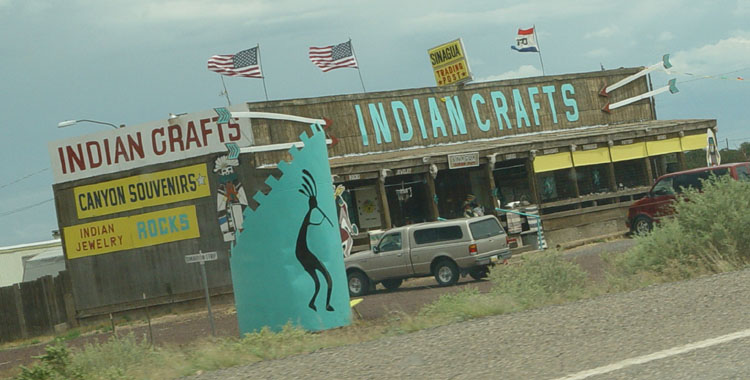 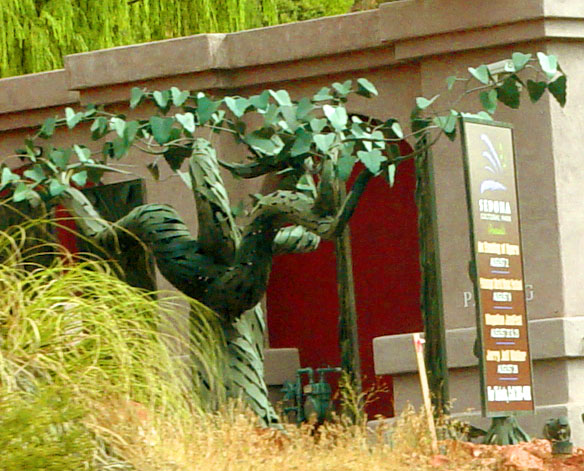 We drove through Sedona which is a tourist town. It was probably a hippy place in the the 60’s but now it’s a home to the rich and tourist entrepreneurs, including “artists”. Above is a tree. 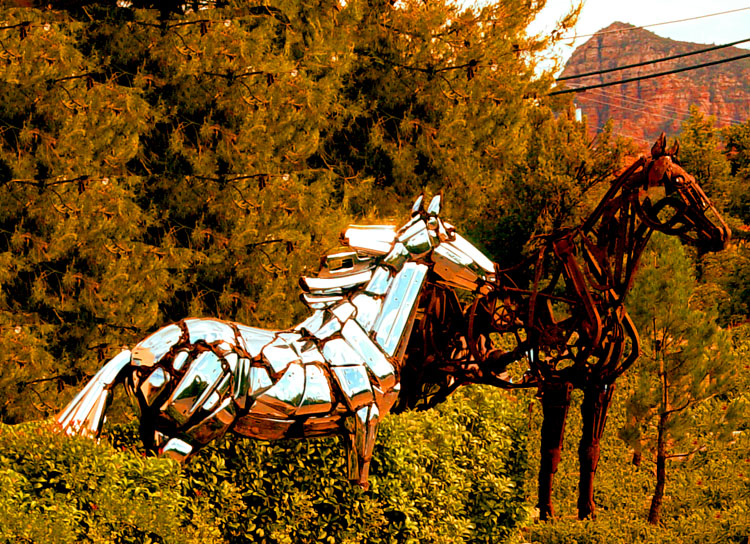 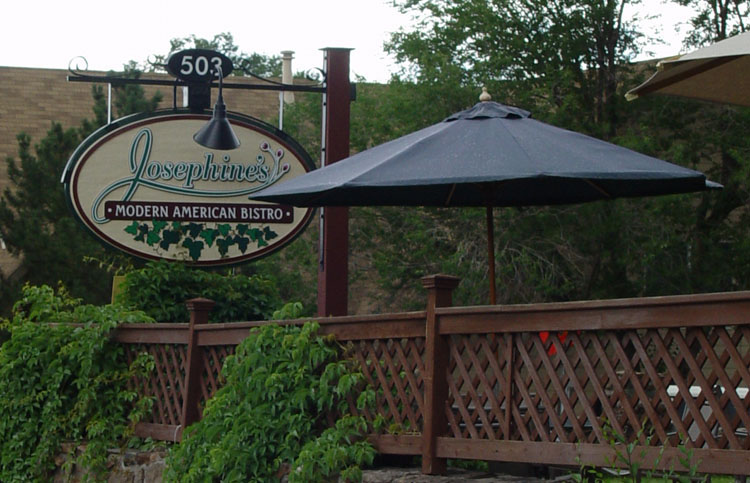 Once we got to Flagstaff we stopped at the place above and in the cool mountain air ate alfresco. If you’re in Flagstaff search out Josephine’s it was the best food we’ve eaten over the last two weeks.

I took this shot of Larry’s car port. This is what we drove under with two bikes on top of our car. Neither of us remembered they were there, until we heard the bang.

Tonight we went out to get something to eat and had a small argument over whether to go into a restaurant that was empty. I was for checking out the menu but Larry set an unconditional no. We ended up in a pizza place. I needed to get rid of my small change so I left a tip consisting of many pennies dimes and quarters. In order to make it up to the waitress I laid out the coins in the shape of a flower. From the car we watched to see her reaction. She walked up to the table and without looking poured the coins in to a bag. How I suffer for my art!

So that was our trip to the Grand Canyon. Tomorrow is a recovery day then after that I’m flying to Georgia to meet my half niece, who I have never met, so I’m looking forward to that.