This is my last day in Phoenix and given that tomorrow I shall need to be able to walk I’ve taken it easy. On my way to taking a shower this morning Larry told me that Phoenix was suffering a water shortage, so could I not take too much time in there. “I don’t think my shower is going to make any difference” I replied with the outer cool logic of Doctor Spock but inside was the manic “fuck off” of a teenager. Great numbers of people are not dying from dehydration so I spend at least 40 minutes meditating under the waters of my newly acquired spiritual home, Larry’s shower. If someone tells you not to do something it’s an absolute must to do it, just to show them you can’t be pushed around, even if you don’t want to do the thing anyway. Anyway water is wasted pretty much everywhere in Phoenix, there are lawns to keep green, evaporating pools and pretend lakes to keep topped up, and plenty of other cosmetic entities (none of which I am able to remember, let alone list) where this valuable commodity is just poured in to the insatiable air and ground of the desert.

It’s quite difficult to express just how hot the dessert air is, but words like “unbearable”, “scorching” and “piercing” come to mind. It is unlike any other atmospheric heat that I’ve experienced. There is a swimming pool near to Larry’s apartment but it’s too hot and dangerous to sunbathe, so during the summer season most people in Phoenix keep out of the sun. Phoenix comes alive during the cooler seasons. The most life you’ll ever see on the street during this time of year is that of people in cars and possibly those behind the non tinted glass of air conditioned buildings. Alfresco is no go when the sun glows in Arizona so.

So today I stay in, writing, recovering and preparing for my next leg of the journey. There is more confusion as to how tomorrow is to go ahead. First a friend is going to drive me to Savannah from near Atlanta and then they can’t. This time I’m prepared and decide to go back to plan “A”, which is to fly to Atlanta then take a 7 hour drive by Greyhound bus to Hinesville, which is near to Savannah. It’ll be an early start, we’ll leave Larry’s at 6 a.m. and I’ll arrive at Hinesville around 2 a.m.

Before leaving Larry and I decide to go for a last supper in search of the Holy Grail of desert desserts. Larry knows of a cheap Mexican fast food place so we take a drive down the freeway. The night air is hot and there’s a surreal reversal of normal experience for me, where I step out of a cool interior in to a warm exterior. In Britain, even in the summer it’s the opposite. 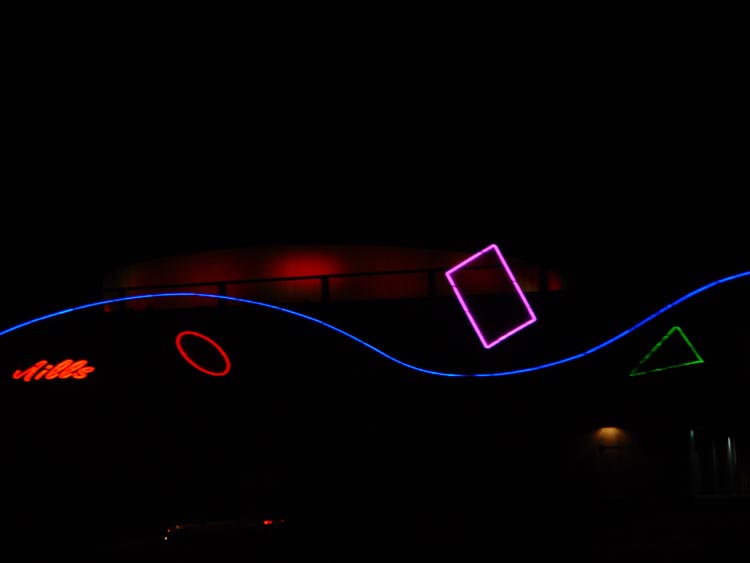 Soon after entering the “restaurant” I notice, to both my delight and trepidation, that this joint sells the mythical dessert we’ve been questing for. We make our orders which unlike all the other meals we’ve eaten this week actually is quite cheap. It used to be that Europeans used to remark on how cheap food in the U.S. was and how big the portions were. While the portions are still large I hadn’t noticed much difference to London prices. If I ever hear an American say their prices are hard to beat I’ll send them up to Barnsley in the North of England where you can get a large plate with a steak sandwich french fries and salad for £1.50 ($2.40). Whenever I go up to Barnsley with people from anywhere else in the world other than Barnsley (or 3rd world countries) I always take them to a place called The Alma in Wombwell, which is near to Barnsley. It’s quite an experience, if you want to eat there it’s advisable to book first. What with Yorkshire folk being tight fisted clever with money it’s normally booked up weeks in advance. Food is no longer served after 7:30, at that point the place turns into a bit of rough dive and all those eating finish off quickly and vacate the building before things start to heat up. 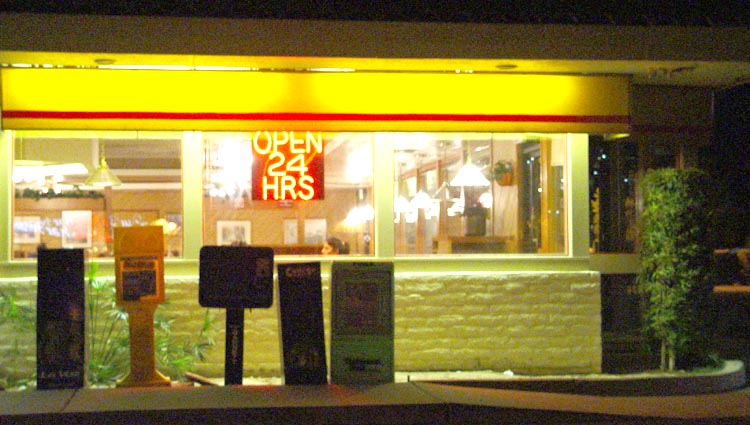 Luckily for Larry and I the Mexican fast food restaurant is open 24 hours, however unlike the Alma it’s rough for all 24 hours. 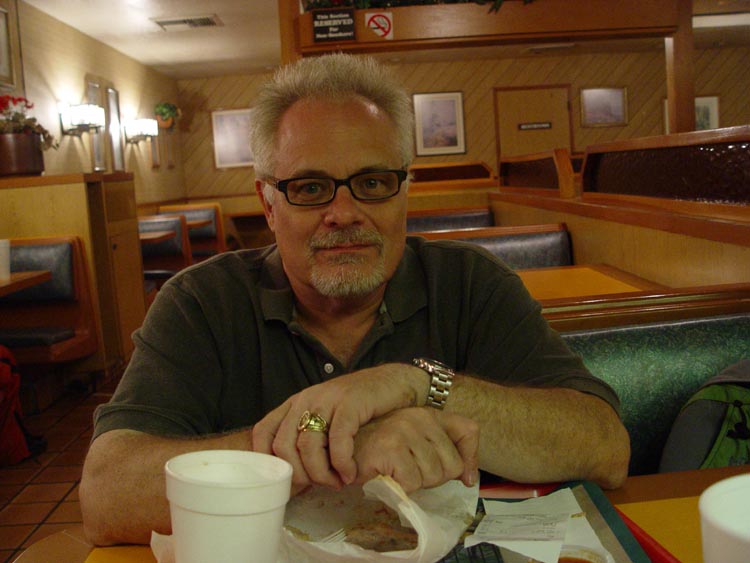 I order the cheapest thing on the menu. I’m not that hungry and want to leave room for my dessert. I watch a young man sitting just behind and to the left of Larry accidently drop half a large cup of orange juice. I pretend not to see him when he looks around and he pretends he didn’t do it. His leg, half his table and most of the floor near to him is soaked with orange juice. He calmly munches on his meal. Slowly a waitress walks towards him and still he says nothing. As she turns the corner it takes her 0.02 seconds to see what he has done and she screams something in Spanish at him. Everyone (well me and Larry at least) looks around. He cowers and laughs and pulls his jacket up around his face. Then she leans over him grabs his head, ruffles her fingers through his hair and gives him a cuddle. As a person who will do nearly anything for female attention I am sorely tempted to push my cup on to the floor too, but Larry doesn’t think it’ll be a good idea, especially as I’ve already drank all its contents. 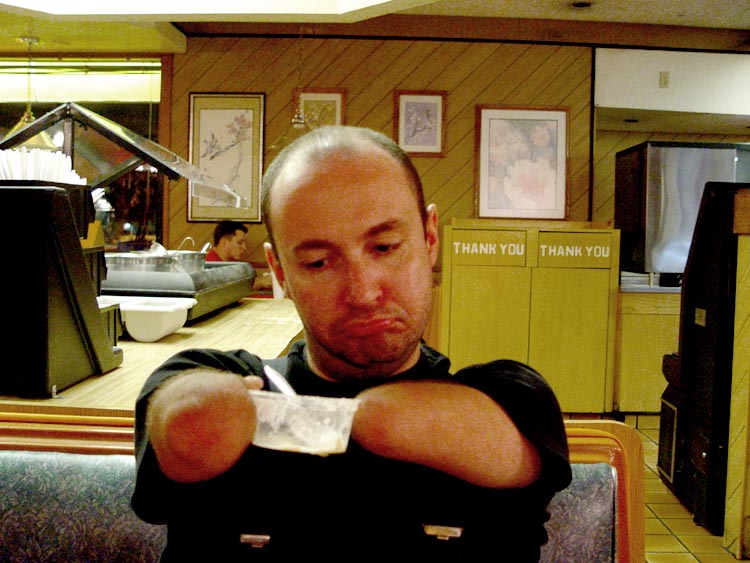 And so came the moment of truth. I ate my dessert and with every mouthful I became more and more disillusioned and disappointed. It wasn’t at all as I had remembered, just a faint imitation of my original true love. In the time it takes to eat a small carton of sponge cake doused in cream, I learned a lesson that sometimes takes a lifetime. It is no use trying to recreate a golden moment, just enjoy the memory.