Whenever I arrive somewhere at night I always enjoy seeing how my surroundings look the following morning. I knew we were in the mountains but I still didn’t anticipate the outstandingly well designed warehouse complex outside our hotel.

So nice sky mountains and trees at the top and not so nice man made railway, industrial zone, and road. Luckily the locals planted a few trees along the road otherwise it’d have looked awful. 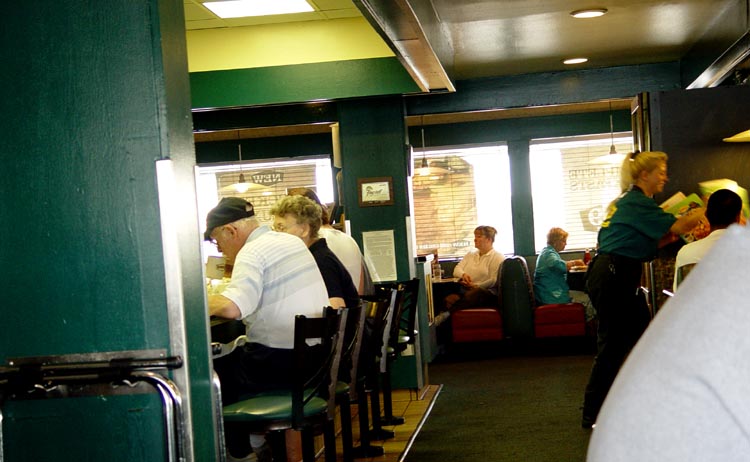 Larry and I go to Denny’s. I realised while I was here that I have yet to sit up at the bar to eat, like people do in the films. I’ve now made this a priority. 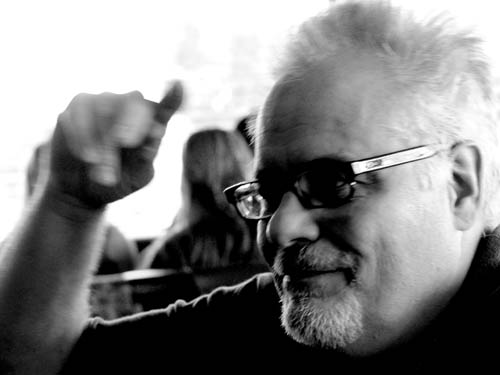 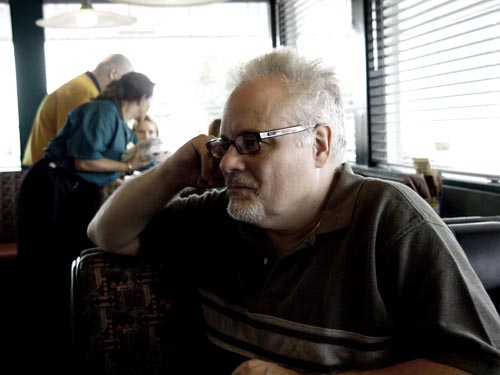 “I don’t think he heard me” 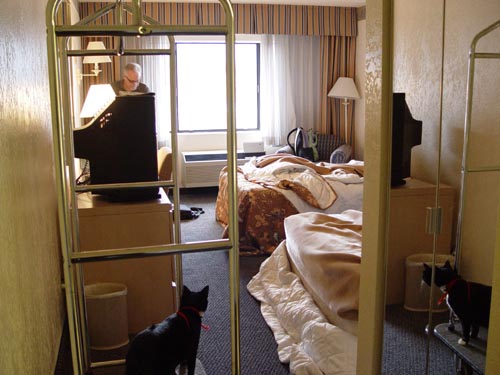 Back to the room to get our bags and cats…..
Sonya is red hot and raring to go. 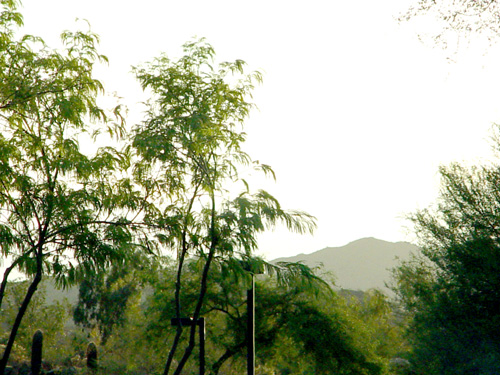 Flagstaff to Phoenix is only a couple of hours away.
We could have done it last night, but Larry couldn’t have got
the keys for his apartment so late at night and
he wanted to see the view approaching Phoenix,
which is meant to be stunning. Unfortunately I
seem to have brought the English weather with me
so it actually looked like a larger version of the Pennine’s in the UK. 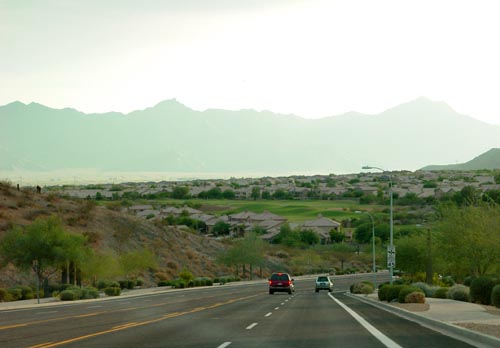 Phoenix is very hot in the summer, but during the other seasons it has a very pleasant climate. Intense irrigation has allowed people to turn the desert in to a lawned city in parts. Many people come here to play golf, in the picture above you can see one of the courses. Phoenix was one of the greatest expanding cities in the States over the last 10 years, and is set to grow at a similar rate over the next 10. It’s main appeal is that it’s like summer during the winter but there are other factors which range from it having a more appealing taxation structure to it being a more multiracial mixture rather than ghettoised like many of America’s cities. 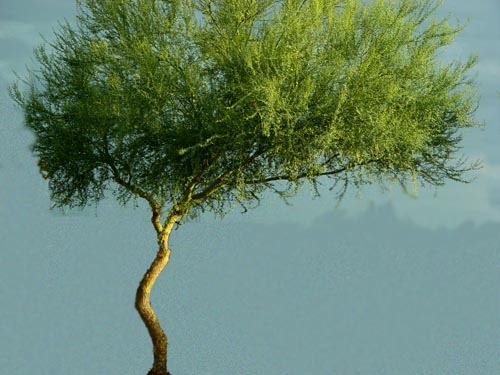 A tree in the desert 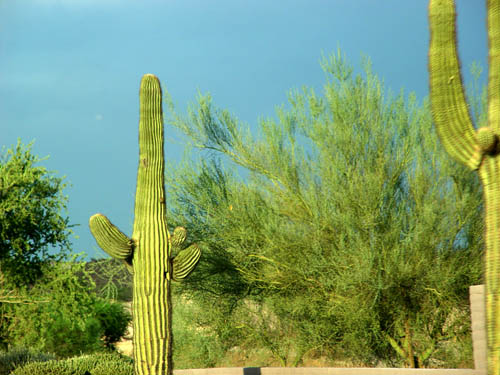 What strikes me though about being here is that due to the surrounding nature being more dangerous than let’s say New York’s I was quite aware of how thin the protective membrane between “civilisation” and the desert is. There are often infestations of Scorpions that have to be dealt with by pest control, there are also many other dangerous animals, many of which could be very close by because where the gardens end the desert starts. 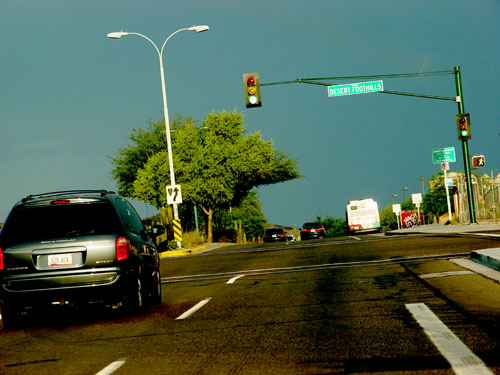 Normally Phoenix is known as the “Valley of the Sun”, but today it was valley
of the clouds. 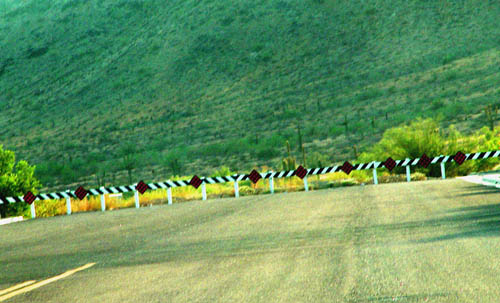 So somewhere the road has to end, and as far as this part of my trip goes,
the journey from New York to Phoenix has been completed. 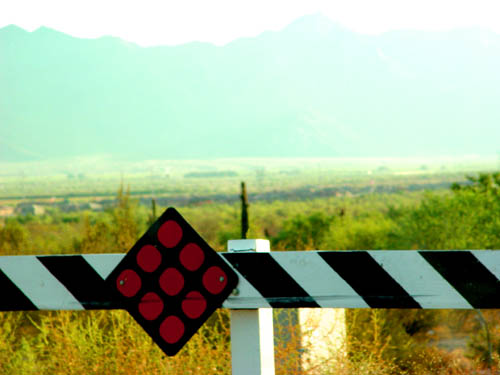 But the symbolism did not end there.

After a few days of not being able to get on the Internet I managed to do so, thus allowing me to post the latest diary pages and check my email. Waiting in my email inbox was a message that totally threw me. The person who I am next due to visit was now not able to have me stay, unfortunately my ticket has been booked, and plans have been made. I shall try my luck with the flight company but it was the emotional shock rather than the practicalities that seemed to hit hardest. It’s unnerving when people don’t behave in a way you’d expect. This was further compounded by the feeling of being unable to speak to anyone at home in the UK because now we’re in a different time zone and 8 hours behind. So anyone I may have wanted to talk to would be sleeping. Of course ultimately it’s no great tragedy but I wanted to bring it up because it partly shows how much we come to be inter-dependant on others to stay feeling buoyant. And while some people strive to be independent I’d prefer to be at a loss occasionally and remain dependent on people I can trust.

I sat in the car park while Larry shopped. Behind me there was a rainbow. I couldn’t stop myself from murmuring “Somewhere over the rainbow”, life went on around me but I wanted to slip back into a dream and wake up at home. But life is not always easy and I tend to prefer to struggle on. So let’s see what happens next.