Today has been a recovery day. So most of the day was spent relaxing. I could write about how nice it was to relax, however that wouldn’t be interesting nor would it be true. Taking responsibility for what happens next isn’t normally easy. Firstly summoning the strength to get on, then trying to determine what I’d actually like to do, then working out how to go about it. At first I was a bit flummoxed because this is a car oriented city so you can’t just hop on a bus and go to the tourist information centre. Larry had to wait in for people to turn up to do things, only 1 out of 3 came. Larry didn’t want to call them for fear of upsetting them, but eventually even he had to succumb and when he found they weren’t coming was reaching for his “I don’t believe it button” in no time.

During the wait I got an Internet account set up and began to feel a whole lot better e-mailing people. But as far as getting anything organised there was the problem with transport and the more striking problem of heat. Even though today was not one of the hottest it still felt like putting your face in an oven as soon as you went out side. If you want to know why cowboys walk slowly it’s because they are trying to stay cool as opposed to trying to be cool. Of course the answer to my problem was partly staring me in the face, the computer. With it and the Internet I could start to search out information about local tours and sights worth visiting. The problem with doing searches for information on the net is that it’s all too easy to get waylaid, and there I was within minutes reading about local criminals such as Billy The Kid, and recent Mafia bosses, all of whom unfolded their lives in this vicinity-ish. So after a hard days toil on the net I had a lot of information but sadly very little on local touristy things.

I needed to get to the airport to sort out my ticket so Larry offered me a lift, unfortunately as we drove there Larry’s car decided to go wrong again and within moments we were limping off the motorway. Slowly, without air-conditioning and frequently stalling we persisted on our journey. The words “so near and yet so far” upon our blubbering lips.

Larry waited outside the airport while I dealt with the tickets, the lines were long and queue jumping was not allowed, I know because I asked. My leg was still sore from Graceland (honestly!!! What don’t you believe me?). Anyway the ticket got sorted and now I’m staying in Phoenix until the 4th August, so maybe parts of the original plan may still happen.

The journey home from the Airport 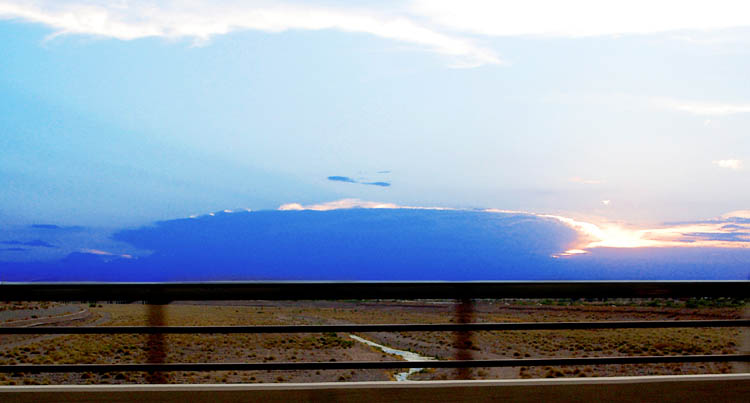 The river in the centre sometimes goes as high as the banks where the road is.

The mist dropping down on to the customers is outside air conditioning, or a nerve gas that makes them think the food is good.

Trying out my night vision mode on my camera. 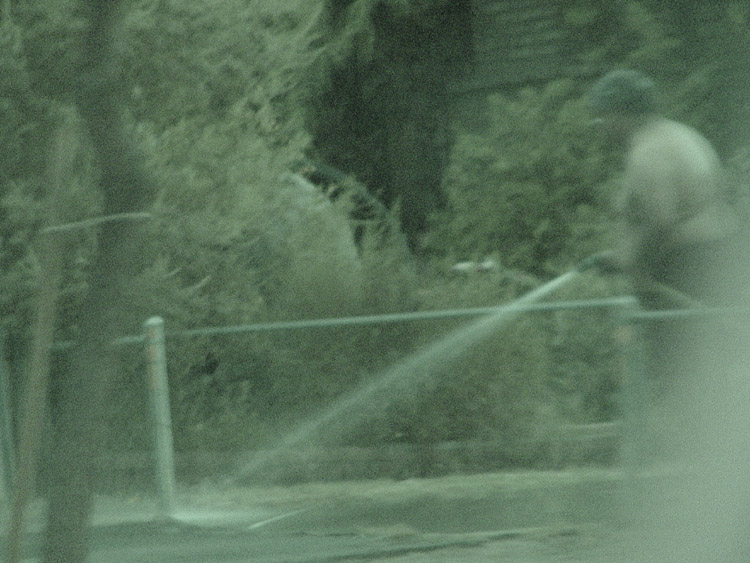 All I did to this picture was crop it and intensify the colour and brightness, et Voila an Edward Hopper painting look-alike. Edward Hopper is one of my favourite painters, he painted scenes from America during the early and middle years of the last century. 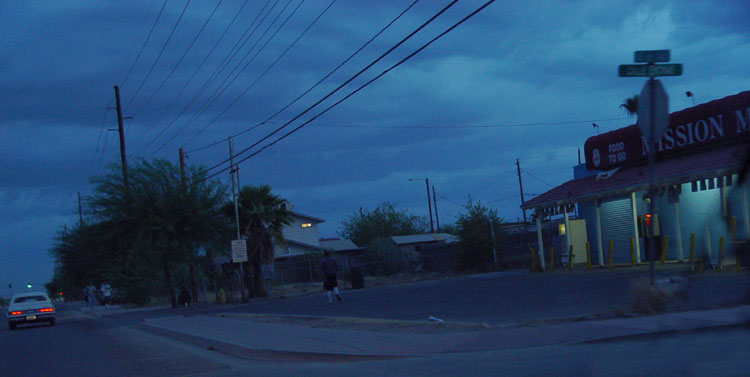 As we drove back from the airport we decided to drive through a Red Indian erm I mean Native American, sorry, district. 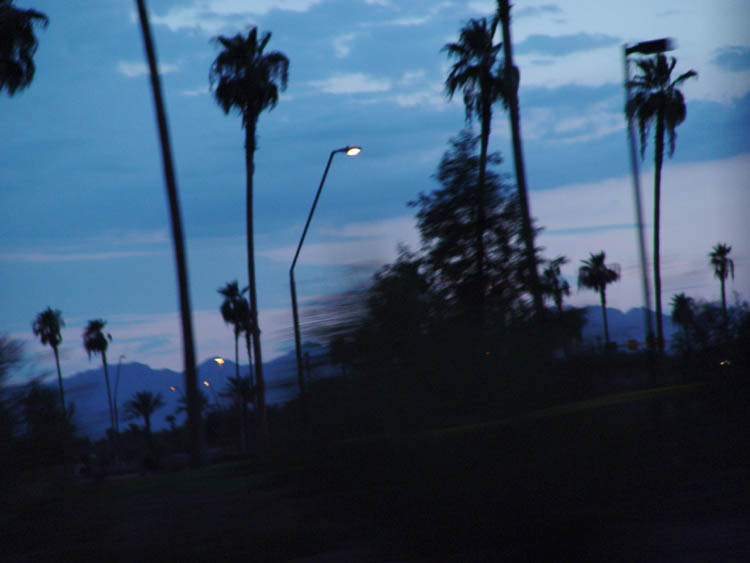 Notice the feeling of an impending storm 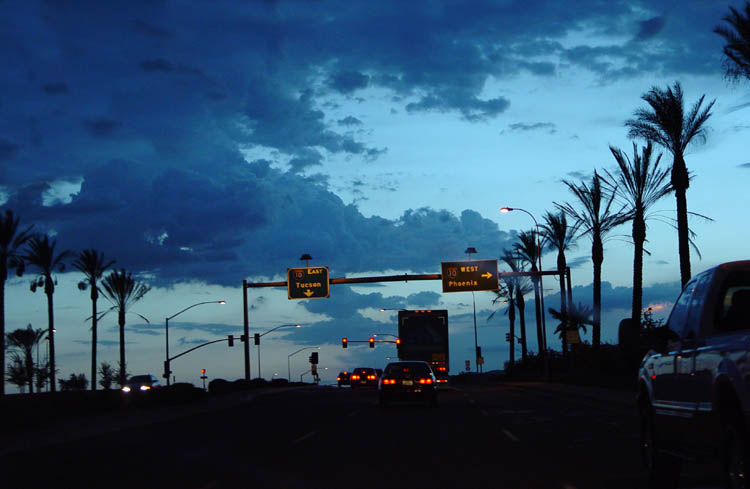 More stormy skies …….. apparently I brought them with me from England. 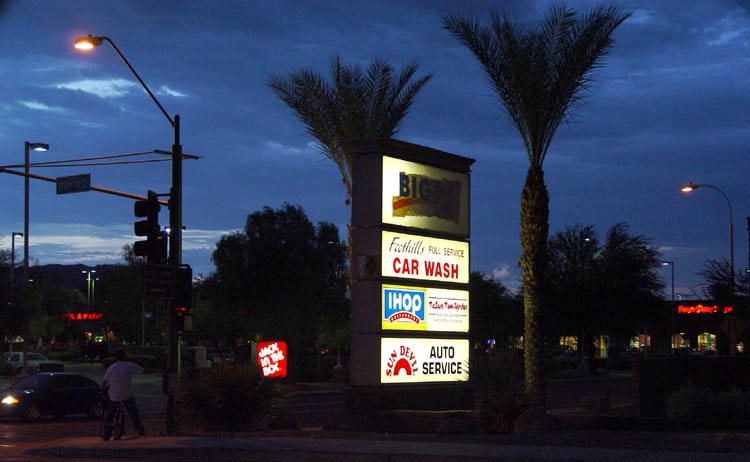 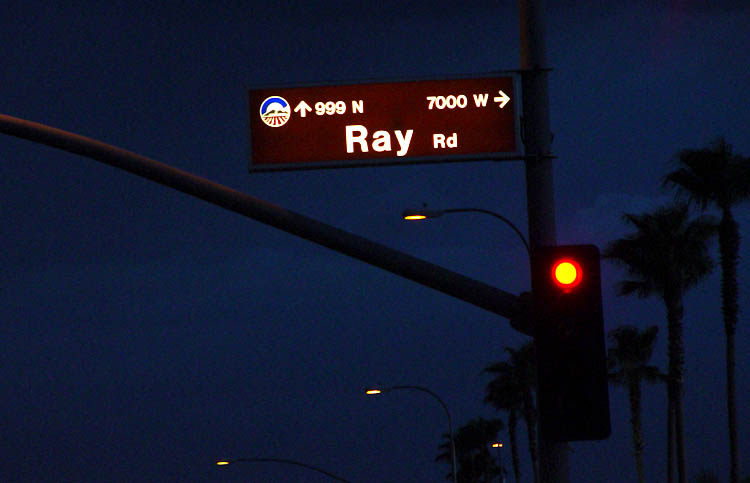 Oh it’s getting stormier ….. I think you know where we’re going don’t you? 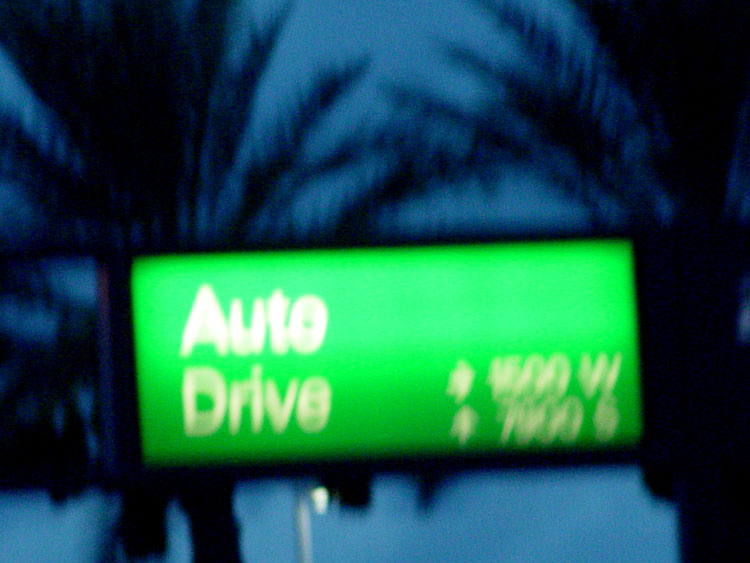 How poetic, almost verging on ironic, except this is the road where all the car sales shops are.
So, ironically enough not ironic at all. 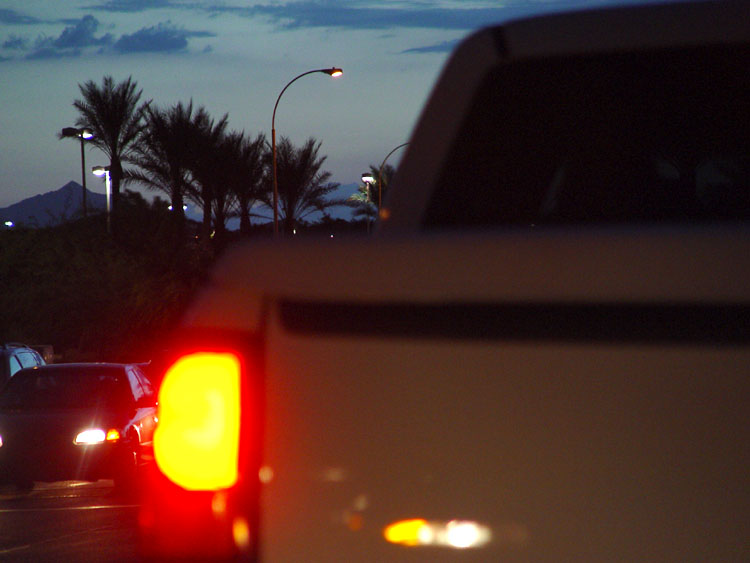 There’s a cafe near me in London which has pictures like this on it’s wall. So this is dedicated to “The American Bar” in Fulham Broadway, London, which mainly sells all American food such as kebabs.

I don’t think they know how to spell “ESSO”

We then stopped at a restaurant called Mimmi’s which is one of the few buildings to look like a European type cottage. However I soon discovered that it was only cosmetic because as soon as it started to rain, water dripped on me from the leaking roof. Apparently whenever it rains around here the garages are inundated with people who find their windscreen wipers don’t work. 1 inch of rain fell during this storm. Rain in Phoenix is a spectator event. Even Larry who is used to rain got in to the spirit of things and glared at his car wondering if he’d shut his window properly. It was too wet to bother going to see. 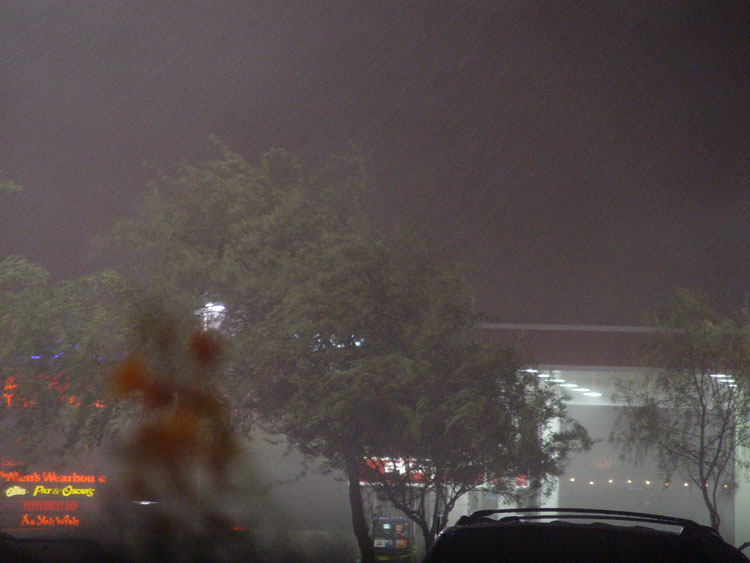 Ooooh reminds me of home 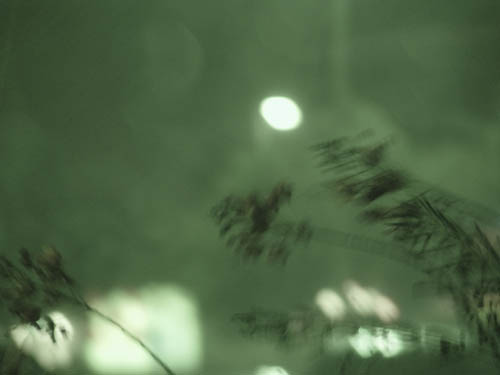 So as you can see today was a bit of a wash out.